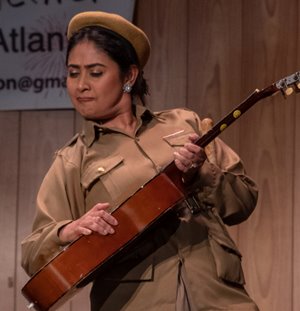 Theater is a powerful medium of self-expression about life. It is a collaborative form of expressions, arts, and emotions. The Hindi theater group of Atlanta, Dhoop Chaoon, is a blend of all these. The group presented its annual program, “Blank Canvas!!! Color it with Dhoop Chaoon” on May 12, 2019 at Berkmar High School, Lilburn, Georgia. 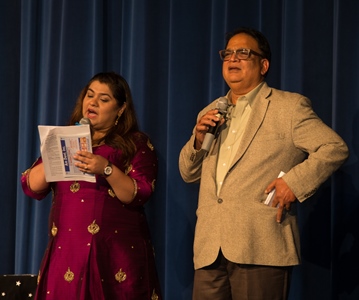 The first play presented was Chief Ki Daawat, based on one of the stories by Padma Bhushan author Bhisham Sahni, about an ambitious young man ashamed of his mother’s illiteracy but who has invited his boss for dinner. Perfect for Mothers Day, it showcased an emotional relationship between mother and son, driven by both sacrifices and socio-economic ambitions. It was adapted and directed by Sandhya Saxena Bhagat, with actors Rita Kapahi, Asha Gupta, Aashish Kapoor, Lee Browning, Ritambhara Mittal, Priyanka Agarwal Tyagi, and Shubhra Singh Chouhan. 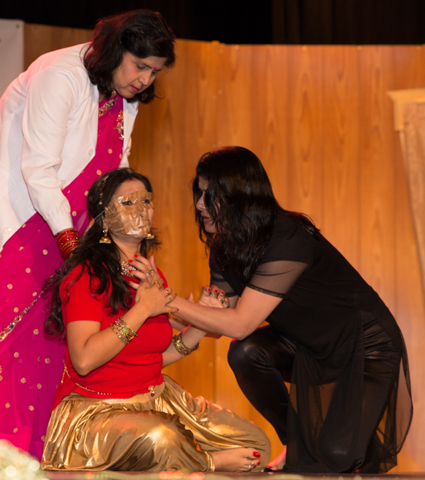 The second item was a theatrical dance act, Chingaari (spark). Each of us has some degree of inner fire, but at some point, that fire may fade away due to a change in circumstances. This item represented rekindling your inner fire and encouraging yourself. Concept, choreography, and music were by Renu Thapliyal Kotnala. Performers were Renu Thapliyal Kotnala, Surabhi Jain, Asha Gupta, and Sukhleen Kaur.

Zindagi Ek Natak was presented by a group of talented actors in Rap n Roll style, highlighting that the journey of life (zindagi) is nothing but a theatrical play. It was written and directed by Sandhya Saxena Bhagat; artists were Moiz Husain, Ritambhara Mittal, Sukhleen Kaur, Aashish Kapoor, Shubhra Singh, and Suryaprakash Kukudala.

Then came Harappa House, written by prolific writer K. P. Saxena and adapted and directed by Sandhya Saxena Bhagat. This witty play derives its name from the ancient Harappan civilization (c2600-c1300 BCE). Two con men, Firdausi and Fahiyan, are selling ‘antiques’ in their store, Harappa House. Actually they are great storytellers who make anything into an antique by adding a good story. The play begins with their admission of struggle and expression of hopes. A rich lady, Mrs. Palkiwala, walks in, looking for the tooth of Khilji. The next customers are a politician and his sister-in-law, who don’t appreciate the high prices for what they correctly identify as junk; they leave without buying anything. In the final scene Mrs. Palkiwala brings the police to catch the two fakers. Actors were Moiz Husain, Sachin Bapat, Chaitali De, Premanand Goswami, Sukhleen Kaur, and Ritambhara Mittal.