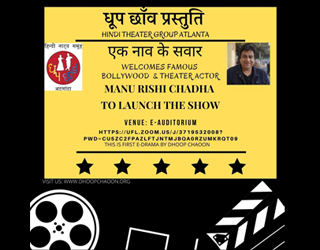 Dhoop Chaoon, an Atlanta-based Hindi theater group, which has been entertaining theater audiences for the past 13 years, responding to the new realities of our times, creatively transitioned online so that the show goes on. 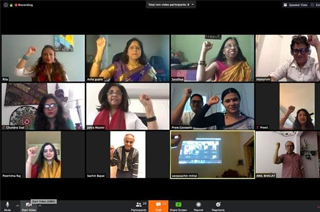 The much-awaited annual show of Dhoop Chaoon, which usually takes place in May, had to be canceled this year due to the current crisis. Amidst such disappointment rose the idea of an e-Natak (e-Play)–where the show could go on, albeit in a modified format. The brainchild of founder director, Sandhya Saxena Bhagat, and fellow team member, Ritambhara Mittal, this concept evinced a lot of excitement within the group. During a lot of brainstorming and endless Zoom meetings, various ideas were discussed, technologies were evaluated, and scripts were written and vetted.

Finally, the play was ready. The group decided to use “social media BFFs”—Zoom and TikTok—to make a series of short skits that conveyed the effect of this pandemic in a very personalized and intimate way. Sandhya Saxena Bhagat, director and writer of this e-Natak, attempted to showcase unique perspectives that are currently being experienced in everyday pandemic life. Some skits were humorous while others conveyed a strong social message.

Technical support staff and fellow actors, led by the “all in one,” Ritambhara Mittal, and ably supported by Mohammad Assani, Premanand Goswami, and Harsheal Nemade, ensured that everyone got comfortable using TikTok and Zoom, and helped in shooting, and later editing and stitching the videos together.

This e-Natak aptly titled Ek Naav mein Sawaar (All in the Same Boat), was screened over Zoom, and was inaugurated by Bollywood actor and theatre artist, Manu Rishi Chadha who applauded the effort, creativity, and hard work of the team.

The adage goes, “When the world is a mess, go inside and discover yourself”. And that is exactly what the team at Dhoop Chaoon did! This unique presentation by the artists of Dhoop Chaoon pushed the frontiers of theatre and showed that anything is possible when there is positivity, creativity, and enthusiasm.