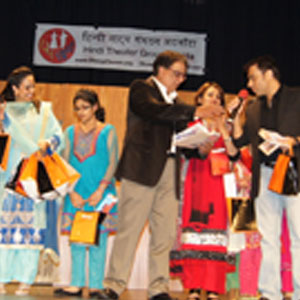 Dhoop Chaoon group, led by program director Sandhya Bhagat, kept its promise of taking the audience through a multisensory experience of theatre, music, art, literature, and vaudeville into a form of entertainment that is one of its kind.

On the very chilly evening of 11th February 2012, the audience at Berkmar High school described the group’s performance as emotional, scintillating, hilarious, entertaining, and percussive. People from all walks of life and all age groups had thronged to a total of around 350 people, which definitely ignited the spirit of the already motivated and enthusiastic team members.

Brittny Trawick started with a welcome and then handed over the mike to emcees Prasad Shetty and Fazleen Sohani.

The first play, “Ek Bantwaara aisa Bhi” written by Sandhya Bhagat, was the story of the reunion of two friends who years before had to endure the India-Pakistan partition, the most painful episode in Indian history. Actors Sadaf Farooqui, Rita Kapahi, Maha Farooqui, Hana Dalwai, Umair Farooqui, Ayesha Rahman, Shaveta Jain, Vijay Tandon, and Navin Tyagi played their roles with soul and depth. Narrators Aslam Parvez and Sandhya Bhagat painted the emotional picture and connected with the audience. 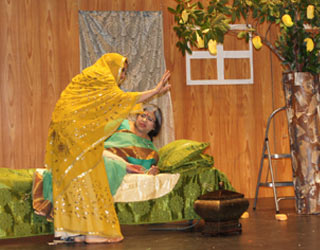 Photo: Sadaf Farooqui and Rita Kaphai near the tree where their characters used to meet.

Next was a short play, “Yeh Kaisa Aaya Zamaana,” based on Bollywood songs. It was a satire on the orthodox Vedic and modern computer-based systems of marriage. The play ends when the tables turn and the bridegroom rather than the bride takes leave of his parents as soulful shehnaai plays in the background. Artists Laxmikant Pandya, Bharti Ben Pandya, Venkat Reddy, Latha Reddy, Prasad Shetty, Vandana Amin, Shweta Shetty, Manasvi Reddy, and Vijay Tandon left the audience in a frenzy of laughter with this item.

“Baap re Baap,” a play originally written by acclaimed playwright Padmashri K.P. Saxena, was colorfully adapted and performed by the group. The comedy of errors created humor not only by the situations but even more by the language employed. A family thinks that their father is lost, so they announce a reward to find him. Frauds come to claim the reward, while family servant Noorbaksh keeps the audience entertained by his silly humor and innovative ways of wooing the pretty family friend. Strange neighbors keep dropping by to tickle the laughter nerve of the audience by their unimaginable ways of showing sympathy. Artists Aslam Parvez, Sunny Sachdeva, Fazleen Sohani, Renu Thapliyal, Laxmikant Pandya, Chinti Bali, Gurupdesh Bedi, Vijay Tandon, and Navin Tyagi used voice modulation and diction to add to this presentation, which was a laugh-riot.

The last item “Risky Pyaar” was a special Valentine presentation from Dhoop- Chaoon, with the philosophy “True love will find its way,” meaning if your love leaves, it never was true, so keep searching for the true love. This dance-play had the audience tapping along with the music and moves of artistic-director Rahim Hussain and his co-artists Brittny Trawick, Shweta Shetty, Prasad Shetty, Laxmikant Pandya and Bharti Ben Pandya.