Diwali celebrated at more mainstream venues than ever before 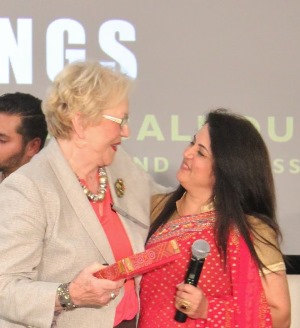 One symbolic and easy way of permeating India into the mainstream, besides the face of Mahatma Gandhi, is the observance of Diwali. The concepts represented by the “Festival of Lights” resonate with people outside of India, more today than ever before. Celebration of the triumph of light over darkness, good conquering evil, gathering of friends and families over good food, faith, and firecrackers… all are mainstay. Leading with the White House observance of Diwali, further accentuated with the first ever national release of the Diwali stamp by the US Postal Service, festivities are being organized by more and more mainstream entities.

Kennesaw State University hosted another successful Diwali program organized by IFSA, Indian Faculty and Staff Association, with over 225 guests. Led by IFSA President Rifka Mayani and her Executive Committee consisting of VP Pat Persaud, Secretary Rajnish Singh, Treasurer Saurabh Gupta, and Social Chair Radhika Dharanipalan, other notable campus attendees included Barbara Calhoun, Dean of the College of Continuing & Professional Education; Dr. Ron Matson, Associate VP for Faculty and Professor of Biology; and Darrin Theriault, Director of Academic Testing. The three honored guests spoke of the unity in the Indian diaspora on campus and their support of their campus kin, off duty as well as at work. 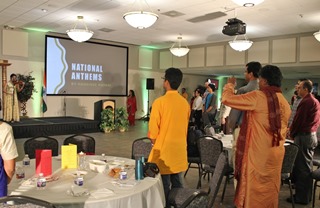 (Left) The Indian and American anthems were played on the violin by Hansinee Mayani. (Photo: KSU)

Indian ambience was evident in the venue’s lights and flowers. The main stage had a wooden arch supported by two wood columns painted with Indian filigree, handmade by Rajnish Singh. Guests were treated to henna art on their palms. Great appetizers and dinner were served by Madras Chettinaad. Entertainment included the Indian and American anthems played on the violin by Hansinee Mayani, followed by a Kathak Dance by Niki S. Mahajan. The Dhyaan School of Music had very young vocalists sing patriotic songs, followed by an Assamese Sattriya dance performed by Prioska and Ernan Baruah. The surprise element was the high energy traditional Middle Eastern dance, Dabka, staged by Lebanese students Abed Abukhdier, Sarah Hamadeh, and Thaher Abukhdier. Hand clapping and foot tapping Kashmiri folk Bhumro was presented by Tandav Themes Dance Academy students Hansinee and Nishtha Mayani, Bhavi Patel, and Simran Kamra. The finale was the stellar rendition of fusion songs performed a capella by Taal Tadka group of Georgia Tech. Their fusion of very popular English pop numbers with Hindi songs received a standing ovation from the delighted audience. The evening culminated as usual with DJ Rudy Narine churning the turntables for everyone to get loose and bring the house down on the dance floor.

Next year there will be even more Indian culture on the KSU Campus: the Year of India will highlight the country through academic curriculum, arts and entertainment, food, study abroad programs, presentations by Indian business elite, authors, artists, performers, a host of organizational presentations, and more.

For the first time and with great fanfare, India House hosted Diwali on October 29, 2016. Consul General Nagesh Singh and Mrs. Pragya Singh had the entire home lit with streams of colored lights (as is usually seen in India), and the swimming pool became a body of water wherein one could float a lit tea-light candle placed on a thermocal square. In the backyard, under huge white tents, culinary delicacies from all over India were served. International dignitaries were present as well as the city’s elite, business and community leaders, and friends and staff of the Indian Consulate. It was a fine gathering of people who exchanged Diwali wishes and bonded in celebration, and the presentation was exquisite.

On November 1, for the fourth consecutive year, the British Consulate celebrated Diwali—and the long and historic ties between the peoples and governments of Britain and India—at the British Residence. The UK-India partnership brings the world’s oldest democracy together with the world’s largest. As British Consul General Jeremy Pilmore-Bedford states, “We are delighted to celebrate Diwali alongside the Indian community here in Atlanta. The ties between our people are incredibly strong, not only because the UK is home to the second largest Indian Diaspora in the world, but because we share many of the same values and ideals.” Britain is the biggest major investor in India where British businesses support nearly 700,000 jobs. India invests more into the UK than it does in the rest of the European Union combined. This partnership will continue to endure as new opportunities in trade, diplomacy, culture, and education are explored.

This year’s Diwali celebration is of particular importance as we look ahead to celebrate the 70th anniversary of Indian Independence in 2017. The UK will mark the occasion with a year-long program in celebration of the cultural ties with India. The Year of Culture 2017 will give audiences in India and the UK access to inspirational, engaging, and diverse art, music, theatre, design, performing arts, film, and literature. Iconic texts such as Shakespeare’s First Folio and the Magna Carta will tour India, and the British Library’s South Asian archives will be digitized, making it easily accessible to all.

At the British Residence, a rangoli (traditional Indian art displayed in the foyers of most homes) decoration was drawn on the concrete entrance of the home by Avni Dalal of the Consulate; in-house preparation was led by Executive Officer Brittany Rose. The delicious cuisine was catered by Ashiana of the Global Mall. Shilpa Jadwani, an immigration lawyer of Neera Bahl & Associates, not only greeted guests with a traditional red tikka (vermilion dot) on the forehead, but also performed a self-choreographed dance to popular fusion of patriotic Bollywood songs. The welcome remarks by both Indian Consul General Nagesh Singh and Her Majesty’s Consul General Jeremy Pilmore-Bedford were greatly appreciated. Nagesh Singh spoke of the personal friendship developed between the two families, which is also reflective of the growing relationship between the two nations. Jeremy Pilmore-Bedford stressed the importance of UK’s continued efforts towards international trade and economic development, despite the Brexit vote. 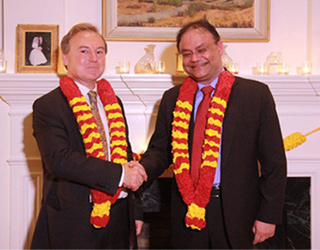 The growing observance of Diwali throughout the mainstream is heartening in light of the international current winds of secession from global economies and global connects, despite inevitability and utmost relevance. Whether we like it or not, we are one people and one human race. 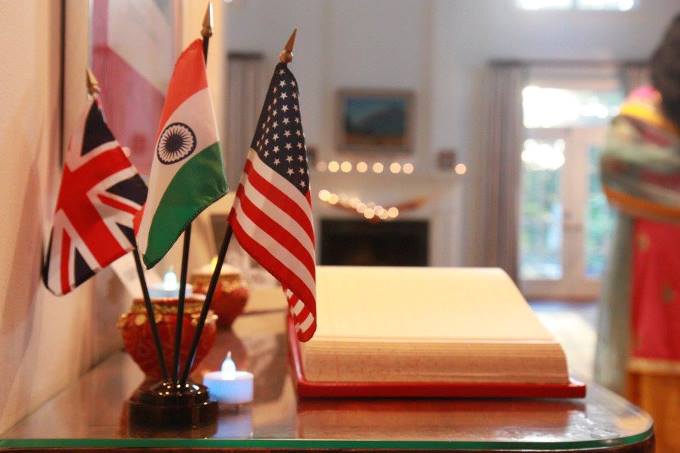 Flags and guest book for the Diwali celebrations of the British Consulate at the British Residence. (Photo: Chikere Uchegbu of the UK Consulate)