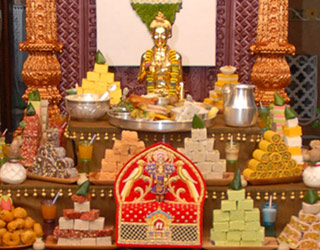 People of all age groups eagerly look forward to Diwali, the Festival of Lights. The most widely celebrated Hindu festival, marking the victory of good over evil and the beginning of the New Year for most Hindus, it is a time when Hindus throughout the world go to Mandir to pray. People illuminate their homes with colorful lights, wear new and traditional clothes, share sweets, and send well wishes to family and friends.

BAPS Shri Swaminarayan Mandir in Lilburn buzzed with joy and excitement. As visitors entered the brightly glowing Mandir, they were greeted with rangoli, a beautiful floor design made with colored rice and powder. Thereafter, visitors participated in chopda pujan, a special prayer ritual during which account books are purified and prayers are held for a prosperous New Year. Later, fireworks lit up the night sky, celebrating the New Year and symbolizing the festive happiness.

Saturday, November 6 marked the culmination of weeks of planning and preparation, with the most significant ritual of the Diwali events, Annakut. Literally ‘a mountain of food’ is offered to God at the beginning of the New Year. “The preparation begins very early in the morning for us,” explained Amrita Patel of the BAPS youth wing. “The vegetarian food is traditionally arranged in tiers or steps in front of the sacred images of God. Sweets are placed nearest. As the tiers descend, other foods such as vegetables, pulses and fried savories are arranged. A mound of cooked rice, symbolic of Mt. Govardhan, is placed in the center. Today over 1,600 food items have been offered to God.”

Devotees arrived early in the morning dressed in colorful traditional clothing to behold the adorned deities. In an atmosphere of festivity and divinity, devotees greeted each other, the young touching the feet of elders and sadhus, and getting their blessings. The first aarti (Hindu ritual) of the New Year was performed at 11am followed by prayers for world peace and well-being.

“Diwali is my favorite festival because of the excitement that fills the air when the festival nears. But having recently migrated to the US, I did not know what to expect,” said Tuhin Patel. “However, after coming to the BAPS Shri Swaminarayan Mandir, I felt like I was back in India. I experienced my culture while getting a taste of fine Indian cuisine. Every person I met had an expression of warmth and happiness on their face. I truly felt at home.” Also attending the celebrations were Mayor of Lilburn, Diana Preston, and State Representative-Elect, B.J. Pak.