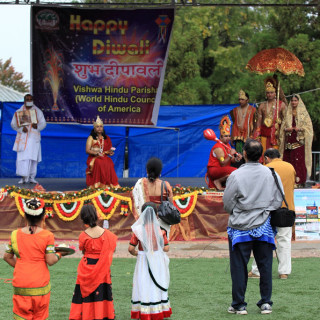 World Hindu Council of America (VHPA), Atlanta Chapter, celebrated the grand Diwali Festival of Lights at Centennial Olympic Park on November 4, 2012. The colorful and lively cultural show has become a permanent feature of the social and cultural scene of Atlanta. About 1700 people attended, in spite of a forecast of rain! 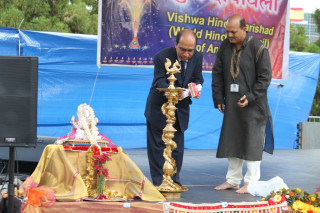 The 5-hour event started about 11am with the traditional prarthna (prayer) offered by students of Balvihar of Cobb and Gwinnett and a Bharatnatyam-based Ganesh Vandana by Yumin Shivdasani. A group of about 20 kids recited shlokas and sang “Vande Mataram” flawlessly, a perfect beginning of a program dedicated to preserving our culture and heritage for our progeny. A group of volunteers from Balgokulam and Balvihar presented a jhanki (glimpse), explaining the various reasons for celebrating Diwali, featuring Laxmiji, Ram, Sita, Laxman, and Hanuman, Krishna, and Satyabhama, the Sikh Panth, and the Jain Panth. Elaborate costumes and makeup were used. The participants were rewarded for their effort by a lot of pictures clicked by the audience!

The highlight of the event was the sheer variety of beautifully choreographed and masterfully presented solo and group dances. The expertise with which each individual and group performed showed their talent as well as their dedication. It also spoke volumes about the love the Indian community has for music and dance, especially classical. Surely, this is a sign of a highly evolved and refined culture. The age group of performers was as varied as the show itself, from 5-year-olds to adults joining in with gusto. The dances presented included Bharatnatyam, Koli dance, Telugu and Rajasthani folk dance, the Lejhim dance from Maharashtra, fusion dances, a modern dance cum exercise routine, Zumba, and, of course, the all time favorite, Bhangra. 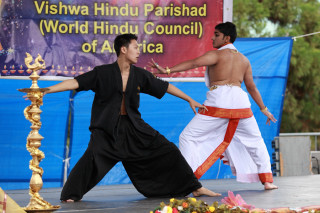 A particularly unique presentation was a dance fusion of Bharathanatyam and Taekwondo, combining Hindu scriptural story with the Chinese yin and yang philosophy.

While each item was greatly appreciated by the audience, a few demand a special mention due to their uniqueness. One was a fusion of Bharatnatyam and Taekwondo, combining Hindu scriptural story with the Chinese yin and yang philosophy. A powerful dance by two young artists, Aadithya Prem and Richard Park from the Gwinnett School of Math Science and Technology (GSMST) was one of a kind, conceived by the students themselves. A group of GSMST students presented Bhangra and a Hindi film dance. Another item was a dance performed by the All Star Academy of Performing Arts, where a group of all American artists, aged 6-15, danced on a series of Hindi film songs, including the song “Wo Kisna Hai.” The actions and steps matched perfectly with the lyrics, evidence that the dancers knew and understood the song, transcending the language barrier! A special thanks to Victoria Kesler and the families of all the participants.

The program had its fair share of musical treats from the performances of some really talented singers, Swapna Jandhyala, Vidushi Gupta and Shyam Gupta, Priya and Divya Joshi, Vaishnavi Bavadekar and Yamini Chavan, and the talented singers from Desi Mandal. A short play by a local theatre group Dhoop Chhaon added a different flavor to the song and dance routines. The program ended with all volunteers assembling on stage to the tune of “Mile Sur Mera Tumhara.”

DJ for the show was our young volunteer Dhruv Khurana, also known as DJ Tiger J. Dhruv showed exceptional talent and patience as he managed the music for the 30 different items, with his trademark smiling “it's all good” response to every situation!

Vital to organizing a program of this magnitude and outreach are selfless volunteers and generous donors. The VHP of America, Atlanta chapter is blessed to have both. Good times go hand in hand with good food and our sponsors ensured that everyone enjoyed morning snacks, tea, a hearty lunch, and as a token of appreciation, a snack box at the end of the show. The main sponsors were Shiv Aggarwal of Global Mall, Shakti Mandir with their generous donation of chhole, poori, and rice, Hindu Temple of Atlanta who donated sweets and rice, House of Spices who supplied numerous cartons of bottled mango and guava juice, plus packaged bhel, and Atlanta Chowki Group with their donation of $1000. And Viceroy Restaurant donated aloo subzi.

A raffle was organized with the grand prize of a beautiful gold necklace donated generously by Legacy Jewels. Mumbai Masala donated five raffle prizes of dinner for two. Also appreciated were the generous donations of Drs. Swati and Abhishek Gaur, Qualiplex Software LLC, Shree Mandir of Mableton Ga., Shiv Mandir of Atlanta, Cherians Grocery, Patel Brothers, and Desi Mandal. Media sponsors for the event were Desh Videsh, Atlanta Duniya, WowNow, JanDarpan, Namaste Bombay and Indiainatlanta.com. These organizations, businesses and individuals have always supported VHPA's activities and without them an event of this magnitude would be impossible to stage.

The main reason behind organizing Diwali Mela is to bring the community together in a festive spirit. In an increasingly commercial world where you can't take a breath without someone trying to sell you something, VHPA dares to defy odds and proves that good things in life can be free. The organizers abhor giving this event a commercial color, keeping all services free, from entry to food and drinks, and keep the event open to the public. The booths for mehndi and face painting were managed by volunteers and were free for kids; a nominal, optional donation was requested from adults. The final culmination of the show was the result of countless hours of work put in by a large team of dedicated volunteers. Here, the work done by one group of volunteers warrants a special mention, the group of young volunteers from Sigma Phi Epsilon Chapter at Georgia Tech, who worked tirelessly from 8am to 6pm on the day of the show, which helped to start and end the show on time. VHPA is proud to be able to present such unique events and applauds the continued support shown by the community, both as participants and as appreciative audience.