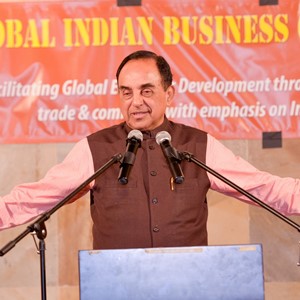 Eminent economist, statesman and member of the Rajya Sabha, India’s Upper House of Parliament), Dr. Subramanian Swamy held an audience of about 200 in thrall with a superb exposition of India’s economics and potential. The October 2,2017 seminar was hosted by the Global Indian Business Council (GIBC) at the Tadka conference center in Johns Creek, GA. 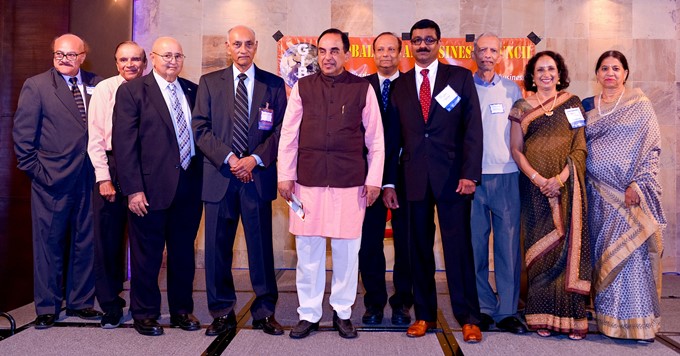 In his welcoming address, GIBC VP Ashwin Patel, called Dr. Swamy a visionary economist and politician and Hon. Nagesh Singh, CGI, Atlanta, a friendly diplomat winning the hearts of the Atlanta Indian American community in a short period of time.

President-elect, Dhiru Shah mentioned that GIBC was formed in 2014 with a mission to facilitate global economic development with particular emphasis on India. GIBC has held three conferences in India and Atlanta including the March 2017 Smart Village Roadmap conference for energy independence in rural India. A standardized template has been developed and tested in 5 villages, 45 more on the way, as the first step towards building rural-based enterprise. This is aimed at eventually reversing urban migration and developing the economic base of India’s 700 million strong rural population, as a prelude to applying the same template around the world. In order to facilitate small and medium size American and foreign companies looking to set up manufacturing/business entities in India, GIBC has opened a small office in Ahmedabad to navigate the legal and financial rules relating to joint ventures in the country.

In his introductory remarks, Mr. Dhiru Shah described Hon. Nagesh Singh like a conductor of well-tuned orchestra under whose guidance the CGI office in Atlanta has become a friendly ‘India house’ for all NRIs. He noted that Mr. Singh is a seasoned Indian Foreign Service diplomat who has held several diplomatic positions in many countries and travels extensively in the six southeastern states to promote India’s economic and political interests. 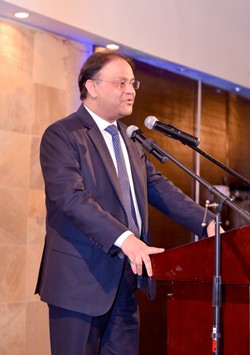 The Hon. Nagesh Singh welcomed Dr. Subramanian Swamy on his second seminar in Atlanta since 2015 and called him his ‘guru’ from whom he has learnt some of the most challenging international economic and political issues including about China.

Introducing Dr. Swamy, Dhiru Shah briefly listed a few major achievements of his commendable work which includes agreement with the Chinese government for pilgrims to visit the Mt. Kailash / Mansarovar holy lands north of the Himalayas, spearheading the movement to free Hindu temples from the government control and fighting a legal and moral campaign against political corruption in India. Shah further stated that Dr. Swamy’s charitable organization, Naveen Hindustan Foundation wants every Indian to achieve the ‘Indian Way of Life’ aimed to empower realization in all dimensions: emotional, spiritual and career. His ‘Virat Hindustan Sangam’ wants to educate young Indians on their heritage and culture of ancient India.

Dr. Swamy’s presentation spanned a wide range of issues. He gave a brief history of his own long record of standing up for democracy and freedom since his days as a young assistant professor and new author, at the Indian Institute of Technology in Delhi. He was recognized as a significant enough person for his book to be held up for comment by the then Prime Minister, and viewed as a threat to the then-prevailing economic and governance models. He was illegally fired from the IIT for his economic views on the orders from the top of the government, but after a 22-year legal battle he has been vindicated and awarded back pay with interest. In between he was posted to the governing board of the IITs. He emphasized that the fight against high-level corruption, nepotism and fraud is a long struggle, but his example shows that a determined fighter can win in India’s justice system. This is exemplified in Supreme Court decisions related to the erstwhile leadership in Tamil Nadu, and is coming to fruition in the National Herald Case against the leadership of the Indian National Congress Party. He predicted to loud applause and cheers, that present efforts to reach a sensible settlement of the nearly-century-old Ayodhya case would lead to a rebuilding of the Ram Mandir at Ayodhya within the next few years. Across the political spectrum in India, this is clearly an emotional issue and ardent desire of the population as exemplified by the Johns Creek audience of Indian-Americans.

Dr. Swamy traced the evolution of the Indian economy from the ancient times when India accounted for over 50 percent of global GDP, through the 1200 years of invasions and colonial exploitation that reduced India to a famine nation by 1947. The Soviet model of centralized planning adopted by early governments had the effect of hobbling development and enterprise, while imposing a complex bureaucratic system beset by corruption. Neglecting agriculture in favor of centralized industrialization had disastrous effects. Back in the 1950s US State Department experts classified the world into those regions that could be saved from the coming Malthusian collapse, but India was regarded as too hopeless to save. Indian scientists implemented the Green Revolution, and in a short time turned India into a net exporter of food. Even today, India has the potential to increase agricultural output by a large factor, and dominate food exports. He argued for the long-proposed set of Water Grids to irrigate regions such as RayalaSeema, while ending the curse of annual floods. Swami argued that such projects will offer opportunities for labor, infrastructure development as well as innovation.

Drawing on such lessons, Dr. Swamy spoke at length of an economic model where the income tax and inter-state goods and services tax regime could be replaced by income from other sources. One source would be free-market auctioning of the spectrum bandwidth for successively higher frequencies of telecommunications, going from 2G to 4G and beyond. Similarly, auctioning of Coal Blocks would be highly lucrative if handled with the national interest in focus. Efforts to bring back illegally held wealth from outside India could dwarf both the above sources.

To rousing applause, Dr. Swamy cited growing US-India friendship and cooperation, particularly in the area of combating terrorism. It is now well-accepted that most terrorism emanates from Pakistan, All the regions under Pakistani army control except for their central power base of Pakistani West Punjab, are restive and eager for freedom. He predicted that in time, Pakistan would break up into four pieces, with Balochistan, Sindh, Pakhtoonistan breaking free of West Punjab. On the other hand, Afghans regard India as a friendly and sympathetic nation that has always tried to protect innocent Afghans from Pakistani aggression.

Dr. Swamy is in the USA partially to raise awareness and support for his vision of a Naveen Hindustan Foundation that is built on the ancient precept of “Vasudhaiva Kutumbakam” (World is One Family). He sees tremendous potential in India’s young population (26 years average age). India’s population growth is leveling off now, but this young population provides an immense resource that will drive Indian enterprise and Indian culture forward around the world. 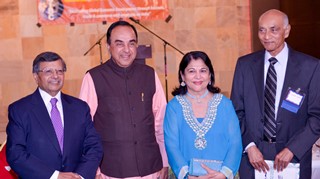 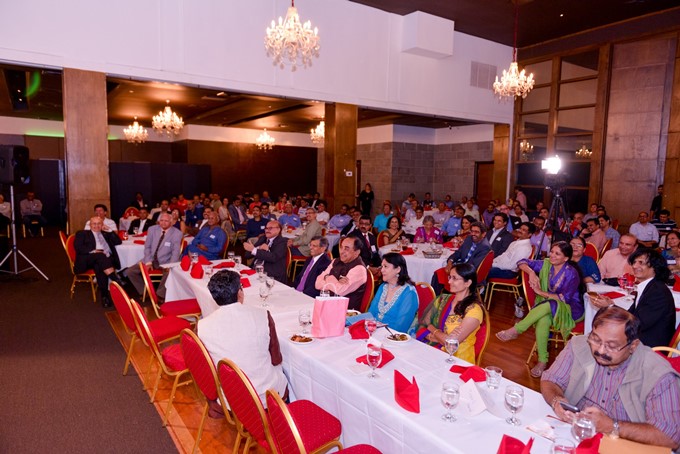