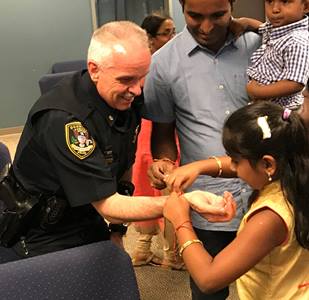 The organization called Dunwoody Indians reached out to the Dunwoody Police Department and invited them to participate in a Raksha Bandhan ceremony. They agreed, and on August 7, 2017, as they explained on their Facebook page, “This evening we took part in a wonderful ceremony with some of Dunwoody's Hindu citizens. The purpose of the ceremony is to celebrate an ancient Hindu festival called Raksha Bandhan, aka Rakhi. Raksha Bandhan literally means, “bond of protection” between brothers and sisters but in modern days it has also evolved to commemorate the bond between public safety, public servants, and the citizens they serve. During the ceremony our guests tied a small thread bracelet called rakhi around the wrists of our staff. The rakhi signified the promise of protection between the people and public servants and vice versa. We were honored to have Councilman Terry Nall who also participated in the ceremony.” And they concluded, “We'd like to thank our wonderful Hindu community for including us in your traditions and your lives.”

Some from the mainstream community:
“WoW. That's wonderful. Loved it.”

“I love the mutual respect and honor this signifies! Amazing!”

“Dunwoody resident and I adore our Indian neighbors! This story is wonderful!!!”

And some from the Indian-American community:
“Precisely what makes this country so vibrant and beautiful. The sheer openness to accept another culture and tradition with an open mind. Cheers to the dept. This is beautiful!!”

[From an organizer] “Thank you DPD Chief Billy Grogan, Lieutenant Fidel Espinoza, Councilman Terry Nall, and all other officers who joined for this event today. We are honored and fortunate to have such wonderful officers in Dunwoody. We take oath that we protect you as you have been protecting our Dunwoody citizens and we both together protect law and order to have a safe community for all citizens.”

“Love this, and love to call Dunwoody my home! Thank you for honoring the Hindu culture.”

“Thank you, Dunwoody PD and Councilman Nall! This means a lot to the South Asian community members.❤💙❤”

Around 50 residents, children, men, and women, participated in this event and tied rakhis on the wrists of police officers.