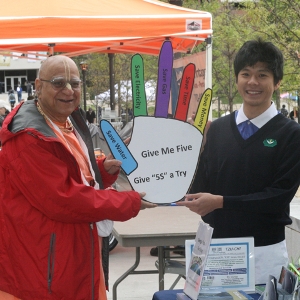 Earth Day is celebrated on April 22nd in more than 192 countries with events to demonstrate support for environmental protection. As the world’s population migrates to cities, and as the bleak reality of climate change becomes increasingly clear, the need to create sustainable communities is more important than ever. Typical ways of observing Earth Day include planting trees, picking up roadside trash, conducting various programs for recycling and conservation, using recyclable containers for snacks and lunches, call for stronger or immediate action to stop global warming and to reverse environmental destruction, and so on.

Gaudiya Vaishnava Association (GVA) participated in the Earth Day celebrations at Georgia Tech in Atlanta on April 18, 2014. Among the many exhibitors, GVA focused on vegetarianism, cruelty against animals or nonviolence, why the earth is called the Mother Earth, the material creation from the five basic matter found in nature, namely earth, water, fire, air, and ether, the presence of soul in all living beings including animals and birds, the transmigration of soul from one body to another thereby stressing the point that the progression of soul should not be stopped by animal killing, quotations from the age old Vedas depicting the importance of protecting Mother Nature, and quotes of great Acharyas and prominent scientists through posters and banners in their exhibit. GVA distributed many books, CDs, DVDs, and magazines (available in English, Hindi, Tamil, and Bengali). 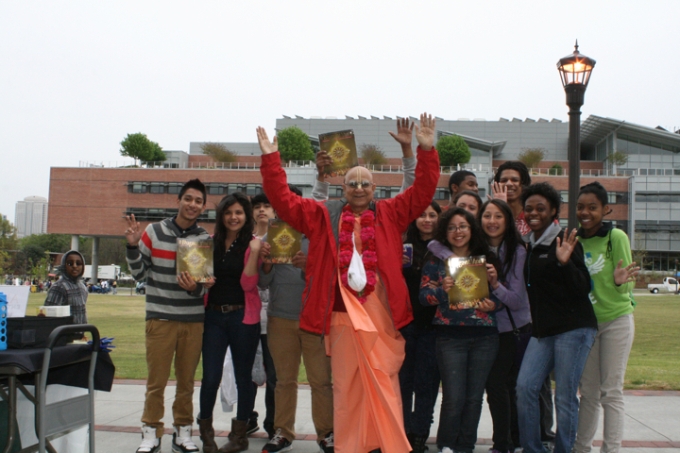 His Divine Grace B.S. Tirtha Maharaj, the Founder Acharya of GVA, visited all the exhibits at the event, discussed the various ideas through which we can be environmentally conscious in our day to day activities by being spiritual, and gave his blessings in appreciation. He was visiting Atlanta in April/May 2014 for the annual 'Spirituality in Spring' lecture series, which also went to Houston, Pennsylvania, New Jersey, and Ottawa, Canada.