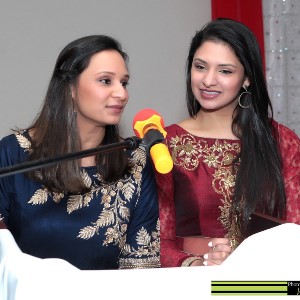 The emcees Aarti and Vandana Aggarwal. (All Photos: Vinod Devlia)

Each year from March to June, Ekal Vidyalaya Foundation (EVF), brings artists from India on a US tour to apprise people of the wonderful work that Ekal’s one-teacher schools are doing in educating and empowering rural and tribal India. Usually the event date for Atlanta is around Holi so Ekal Vidyalaya makes it a music and masti event much like it is done in India. On Saturday, March 16, Atlanta was in for a treat when Ekal’s artists from India called the “Heartbeat Group” performed a scintillating concert-style program before a very appreciative gathering of over four hundred community members at Impact Banquet Hall, Global Mall.

To begin the event with a Holi flair all the guests who entered the hall were welcomed with a gulaal teeka. While enjoying a delicious full-course dinner served by Ashiana, guests mixed and mingled for an hour before the show promptly started at 7:30pm. 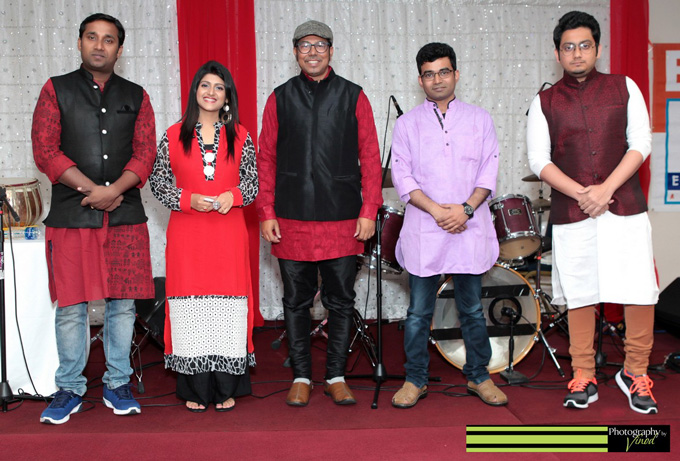 DVDs and slide presentations showed the strides Ekal has made in rural/tribal education, health, empowerment and integrated village development grooming over 2 million students, almost equal number of boys and girls, enrolled in nearly 82,000 Ekal schools across India! A TV interview clip with the field volunteers in Kashmir showed how courageously local youth are carrying on the work of education despite several stumbling blocks and terroristic incidents around them. With 5,384 schools in Jammu and Kashmir and over 5,000 in northeast India, Ekal has made inroads in remote villages which were a hotbed of separatist and terroristic activities and where now grassroots workers who believe in Ekal’s groundbreaking work are determined to make a difference, despite personal risk.

In addition to the one-teacher schools, Ekal has also started Gramothan Resource Centers (GRC) where training for growing high yield organic crops, vermiculture, home-based small businesses and skill enhancement in several fields is provided. This visionary step generates income opportunities in the villages and prevents rural flight to large cities in search for employment. An Atlanta volunteer, Ranch Lakha who visited an Ekal school and a GRC in Gujarat which provides computer skills training through a computer bus which visits 12 villages, shared his personal photos of the trip showing the work being done by Ekal. Such visits are called ​vanyatras and can be arranged for any sponsor through Ekal in India. This immersed the audience into a captivating virtual experience as the Ekal’s role was conveyed to them through the photos.

Impressed with Ekal’s far-reaching work, several audience members immediately got up to sponsor Ekal schools. Shiv Aggarwal who has been sponsoring many schools for several years did this time too. Dr. Jagdish Sheth sponsored 10 schools and several new attendees sponsored one, two and more schools on the spot. The numbers of schools being sponsored were steadily increasing. There was such an excitement in becoming a part of the Ekal movement that C K Patel, a noted entrepreneur and philanthropist, and past president of AAHOA offered to match the last 5 schools to bring the number of schools sponsored by Atlanta to 101!

All the sponsors, donors, dignitaries, media partners, Fifth Season decorators, volunteers from several organizations who worked tirelessly in the background got a big round of applause. VHPA, as always, lovingly prepared and served tea to energize the audience who wanted to continue to dance and sway to the music. 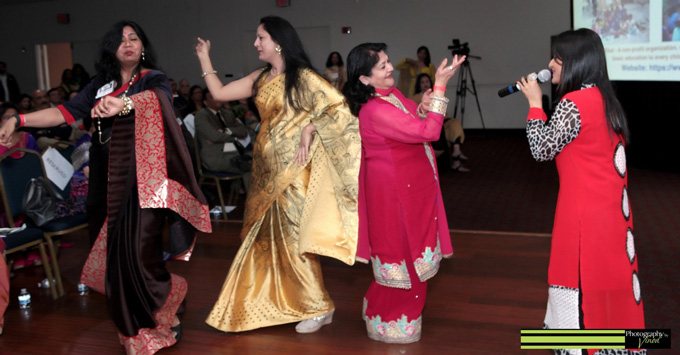 Madhu Sheth (3rd from left), and other audience members dancing spontaneously to the lively music.

Heartbeat Group’s commendable concert-style nonstop, foot-tapping numbers had the audience dancing with total abandon on the dance floor. This was well-captured by Anjali of TV Asia and aired on March 26.

Prof. Jagdish Sheth lauded Ekal Vidyalaya’s work and commented, “The mission of life is to unlock the potential of others. Our responsibility is to make ordinary people extraordinary. This is exactly what Ekal Vidyalaya does for thousands of disadvantaged children in India. My wife, Madhu Sheth and I are very passionate about the mission and activities of Ekal Vidyalaya and we support it enthusiastically.”

All in all, a fantastic musical evening brought together many magnanimous Atlantans to heartily support a larger than life transformative movement. It was truly a magical evening to cherish!