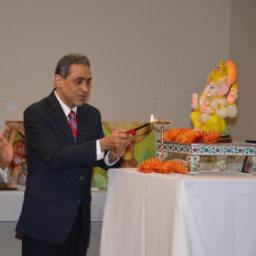 Guest Arvind Sharma of Delta Airlines lights the lamp before speaking to the gathering.

The Ekal Appreciation Dinner Event was held on Friday, December 7, 2012 at the Impact Center in Global Mall. The event was well-attended by about 170 staunch supporters. Ekal's primary education, healthcare, and vocational and empowerment education is now transforming entire villages in 22 states, educating over 1.1 million children through 39,769 schools. Bharat Lok Shiksha Parishad, a constituent of the Ekal Abhiyan, has received the SJ Foundation's S. R. Jindal 2012 Prize for peace, social harmony, and social development. The prize money of rupees one crore will be used for the running of Ekal Vidyalayas benefitting the marginalized villages in remote India. The Ekal Appreciation Dinner Event was to thank supporters and reach out to new and potential donors.

A dinner was served buffet-style from Ashiana, and the ambience of the hall was soul food to those who had braved Atlanta traffic to be present. After the Ganesh Stuti and lighting of the lamp by honored guest Arvind Sharma, a senior official of Delta Airlines, Mr. Sharma emphasized the need for a strong spiritual foundation for every successful endeavor.

With a strong rendition of the song, “Papa Kehte Hain,” Ajay Upadhyaya presented a short video on the life and dreams of an Ekal student.

Then Navin Tyagi's Sargam and singers Rekha Pallath, Pankaj Bhargava, Yash Warke, and Chandrika Narayan presented the best of best with the music, sound system, singing, smiles, vibes, and support. Emcee Rachna Gupta interleaved the songs with heartfelt appeals for donations, urging, “The number of schools is 39,769 which is about 200 short of 40,000, and we can hit that goal tonight!” Artist Monika Mittal graciously offered her hand paintings as gifts to donors, and within the next fifteen minutes there were several pledges. 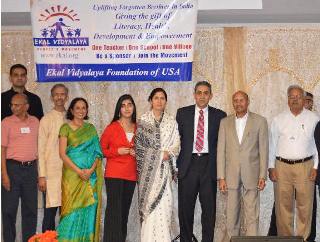 Board member Kusum Khurana recounted her experience of visiting an Ekal school in Saharanpur District, India, only a fortnight before. Her first-hand account made a big impact on all those gathered. One gentleman immediately came forward to make a sponsorship: “I am from Saharanpur; here's my check!” Uma Muralidhar's tremendous support and dance at the end really enlivened the dance floor.

Planet U donated net proceeds from the recent Bollywood Dhamka to support Ekals’ schools. Malla Reddy and Ajay Upadhayaya have successfully made presentations on Ekal operations in order to reach out for corporate sponsorships. Another initiative will be an immersion style tour in rustic Almora District, where participants can visit Ekal schools.