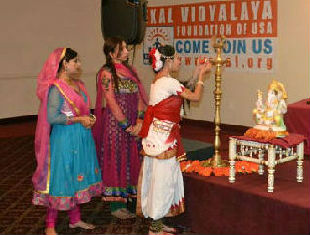 Aside from having had their own recitals to raise funds for Ekal schools, Divya Srivastava, founder-director of Geet-Rung School of Dance and Music, danced here to “Jhanak Jhanak Tori Baaje Paayaliya” in Kathak style to Pankaj Bhargava’s singing; the husband-wife duo got huge applause. 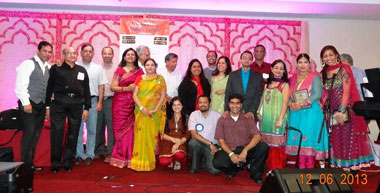 Uma Murlidhar’s Planet U Performing Arts supported Ekal through their academy’s fundraisers in 2012 and 2013, and two of its students, Divya Srinivasan and Sindhu Sukumar, brought a lively, foot-tapping Holi dance from Ye Jawaani Hai Deewani to add color to Ekal’s evening.

The dance floor went ablaze with color, energy, and the sound of ghunghroos as Sagnika Mukherjee performed her high-octane dance on the hit song “Nagade Sung Dhol Baaje” from Ram Leela, a movie that created waves recently. She danced with pure abandon, her movements and spins a visual treat earning her long, resounding applause.

Ajay Upadhyaya, technical and cultural coordinator for Ekal, opened with Pankaj Udhas’ ghazal “Chaandi Jaisa Rang Hai Tera” and then urged the dhanwaans to change the lives of the poor in India by supporting Ekal in eradication of illiteracy and prevention of exodus of villagers to cities in search of livelihood, through their village rejuvenation program. He reiterated that a one-time donation of $365 ran an Ekal school for a whole year, providing basic education to nearly thirty students and empowering the whole village. From Kashmir to Kerala, Ekal currently has over 51,000 schools, and with the 42 schools sponsored at this fun event, Ekal is slowing inching towards its goal of 100,000 vidyalayas. Sponsors can track their school's progress and get additional information at ekal.org. A wonderful evening for a worthy cause.