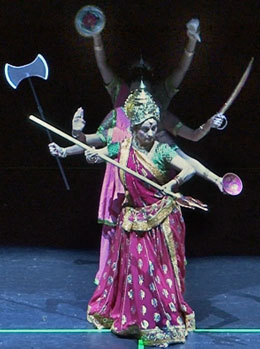 Kumud Savla dances as Durga, on the theme of Shakti. (Photos: PatTyronFilms.com)

Nritya Natya Kala Bharti (NNKB) Dance Academy presented its 11th annual dance recital at the Atlanta Civic Center on March 18, 2012. The nearly sold out show was graced by the presence of Consul General of India in Atlanta, Hon. Ajit Kumar and other dignitaries.

The program was emceed by Viren Mayani, who had written the script, his wife Rifka, and Sadaf Farooqui. Hon. Ajit Kumar, with Music Director / Choreographer Sandeep Savla, Dance Director and Choreographer Kumud Savla, their daughter Samta and son Sil, lit the traditional diya and invoked the blessings of Lord Ganesha.

Mahishasur mardini (the destroyer of demon Mahishasur), followed by the different forms of Durga with all her strengths, was performed to the song "Ayigiri Nandini." The dance for Sita was set to three chaupais (quatrains). The following dance which depicted the infamous disrobing episode of Draupadi in Mahabharata, was set to "Mori peed suno Mat Der Karo." The Tana Riri dance was a captivating jugalbandi performance.

An exemplary role model, Mother Teresa was a Roman Catholic nun of Albanian ethnicity and Indian citizenship who founded the Missionaries of Charity in Calcutta in 1950,where she ministered to the poor, sick, orphaned, and dying. This dance depicted a poignant scene showing a boy (Sil Savla) begging and being ignored by passersby till Mother Teresa extends her hand. Both roles were well acted with touching facial expressions.

Who does not dream of touching the sky? The next two dances were a tribute to space heroes Kalpana Chawla and Sunita Williams. Kalpana Chawla, born in 1961, was an Indian-American astronaut with NASA, the first Indian-born woman and the second Indian person to fly in space. She was one of seven crew members killed in the Space Shuttle Columbia disaster in 2003. Sunita Williams, born in 1965, is a U.S. Naval officer and NASA astronaut, the second woman of Indian heritage selected by NASA for a space mission, and a record-setter.

As a tribute to India’s former Prime Minister Indira Gandhi, the performers presented a dance inspired by her personality and charisma: where there is will there is a way.

The last item in this segment was the pièce de résistance—Kathak by Samta Savla and Flamenco by Rebecca Lutz. There are many striking similarities between Kathak and Flamenco, a southern Spanish dance with its roots in Indian, Arabic, and European Gypsy music. This dance with sawal-jawab was widely applauded by the audience.

The second segment was a celebration of India’s slew of festivals born of legends, seasons, customs, and religions. Fasts and feasts, music and dance, colors and purity, pageantry and propriety, though all contradictory, form part of the festivals in one way or the other. The students mimicked that gaiety and exuberance of culture through the kaleidoscope of dances and popular Bollywood hits. 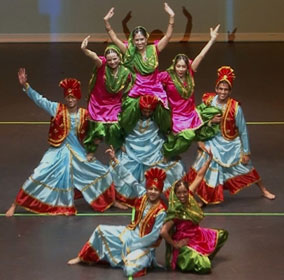 Baisakhi Mela and the joy of energy—Bhangra dance! Baisakhi Mela had a high voltage Bhangra dance. The festival celebrating the sacred bond between a brother and sister, Raksha Bandhan, was marked with a dance to “Rakhi bandhwale mere veer.” Ganesh Chaturthi is very popular; it had two fast, rhythmic dances—to a Marathi song and also “Deva Shri Ganesha.” Some dancers surprised the audience by running on the stage from the aisles carrying Ganesha idol on head and later dancing with lezim.

Janamasthami was celebrated to a medley: “Govind bolo,” “Hari Gopal bolo,” “Maiya Yashoda” old and new, and “Mach Gaya Shor.” A few spunky Govindas formed a human pyramid and broke the dahi (yogurt) handi (earthen pot) to the cheery applause of the audience. 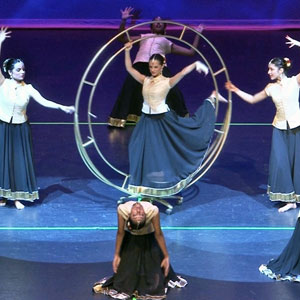 When all the performers were on stage for the final bow, a loud burst of confetti showered on them and they all deservedly received a standing ovation.

The slideshow of legendary icons and colorful festivals and the props by Aslam Parvez and Syam Yellamraju (giant wheel, swings, hanging handi with buttermilk, etc.) added extra sparkle to the dances. Mustafa Ajmeri deserves compliments for marketing, sales and logistic support, and Usha Thacker for dazzling costumes. Patel Brothers / Raja food as a grand sponsor provided the printing pro bono and donated trophies for all performers.

Both Sides of the Veil: A Comparative Analysis of Kathak and Flamenco Dance. Los Angeles: University of California, 1991. Master's thesis by Miriam Phillips, Assistant Professor, University of Maryland.