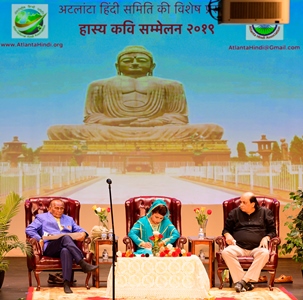 Time was of the essence as people were organizing another successful year of Atlanta Hasya Kavi Sammelan (HKS) for April 13, 2019 at Berkmar High School, Lilburn, Georgia. They say three is a charm but the fourth HKS turned out to be charmed, too. This was the fourth year of this event being conducted by Atlanta Hindi Association (a group of Hindi-speaking friends) and the International Hindi Association. This would not have been possible without the leadership and motivation of Director Mr. Sanjeev Agarwal and continuous support of sponsors and volunteers.

Every year, three poets are selected by the association, and the honored ones arrive from the “Land of Diversity” to the “Land of Freedom,” bringing with them their tremendous talent and laughter and taking away memories. This year the poets who tickled our funny bones were

Padma Shri DR. SURENDRA DUBEY of Raipur, Chattisgarh, a poet of distinct attitude who can make others laugh by his sense of humor and penetrating satire that points to subtle ironies and incongruities of life. He has been honored with Padma Shri 2010, Kaka Hathrasi Hasya Ratna Award, Hasya Shikhar Samman, and more.

Shri MAHENDRA AJANABI of Delhi, a poet who is not only witty but also touches the strings of life in a manner that amuses people. He has also been recognized by various awards such as Kaka Hathrasi and Om Prakash Aditya.

Sushri SHABINA ADEEB of Kanpur, also known as the Queen of Ghazals, who has a melodious voice. She has a rare talent of leaving people awestruck by her choice of words and her subtle attitude. She has been feted with numerous awards and honors such as Mallika-E-Ghazal Award and Punjab Kesari Award.

Mr. Sanjeev Agarwal started the event by paying tribute to the Late Shri Pradeep Choubey, a renowned poet in Hasya Kavita world, and he took an extra step of dedicating the 2019 HKS event to his bright memory. Shri Surendra Dubey joined hands with him and said, “We lost a gem from the Hasya world, so we will not stop laughing and will dedicate this evening of laughter to him.” This was followed by prarthana sung by around 18 kids varying in age from 5-13 yrs. These little kids rehearsed diligently and were eager to welcome the poets onstage. The poets were very well received and were thrilled to see that such little kids were welcoming each one of them.

Various activities for the kids kept them happily entertained.

The series of events began: on one hand, the hall was packed with around 400 people, while on the other hand, the HKS team had organized kids’ activities (kids camp) with magic show, movie, face painting, and canvas art to keep the kids entertained. The expressions on the faces of the people entering the hall reflected their satisfaction with the snacks served by HKS team and the beautiful pictures taken at the photo-booth. Now they were ready for the program!

Words are not enough to describe the talent in the hall, but to start with, all three poets got a standing ovation from the listeners. Dr. Surendra Dubey, who took the stage first, started the wave of laughter with his polite remarks and funny poems, and after a little introduction, he handed it to Sushri Shabina Adeeb (pictured left). She is a poet of a different genre, who sang a euphonious vandana of Shri Mahalakshmi, followed by a series of ghazals and shers such as “Diye Jala rahi hoon” and “Khamosh Lab hain” which were heart touching and left the listeners in awe. Though this was not laughter, a different flavor was served and admired. Shri Mahendra Ajanabi charmed the audience with his quick-witty humor and satire. He recited a poem on trains, “Rail-Gaadi,” which brought back old memories of travelling in a jam-packed vehicle; how beautifully he visualized it can only be felt and not described. In between was ongoing laughter due to spontaneous vyangs and jokes.

“Alone we can do so little; together we can do so much.” Making this come true , the entire HKS team worked day in and day out to make this event successful. This included reaching out to people for sponsorships, distributing the tickets, checking the venue, and other preparatory work. One attendee said, “The event was so well organized that we felt it was like a marriage, well collaborated, and the best part was that the whole family was entertained.” Another person mentioned that “This is a one-of-a-kind event and professionally executed.” To continue the festivities, an after party was thrown where volunteers got a chance to meet and greet the poets in person and got to know more about them.

On the last note, Atlanta’s Listeners wait for such events to be held every year to take a deviation from the daily routine and awaken the souls with laughter, to bring families together, and to sit and pour in some good humor into them!