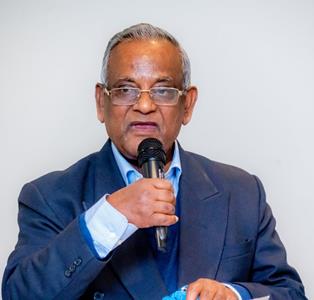 The India-based literary and cultural organization “Dhwani” hosted a book launch event and released a new book titled Faiz Kavitwam, a Telugu translation, by well-known poet, writer, translator, and educationist Sri Jalajam Satyanarayana, of a selection of poems originally written in Urdu by the famous poet and journalist, Faiz Ahmad Faiz (1911-1984). ​Faiz was one of the most celebrated writers of the Urdu language. His poetry was translated into English by many writers the world over. The event was held in Sankranti Restaurant on Friday, October 25, 2019.

"Faiz Ahmed Faiz was born on February 13, 1911, in Sialkot, India, which is now part of Pakistan. ... Faiz's early poems had been conventional, light-hearted treatises on love and beauty, but while in Lahore he began to expand into politics, community, and the thematic interconnectedness he felt was fundamental in both life and poetry.  ... While his work is written in fairly strict diction, his poems maintain a casual, conversational tone, creating tension between the elite and the common, somewhat in the tradition of Ghalib, the renowned 19th century Urdu poet. Faiz is especially celebrated for his poems in traditional Urdu forms, such as the ghazal, and for his remarkable ability to expand the conventional thematic expectations to include political and social issues." [https://poets.org/poet/faiz-ahmed-faiz]

The program started with the traditional lighting of the lamp by Consul Shailesh Lakhtakia and other guests of the evening. It was followed by a melodious invocation by Poojitha Vishnu, who sang “Vaishnav Jana to,” a song reminding us to be humble and seek good in everyone.

Consul Lakhtakia made an endearing speech on writers from Lucknow and shared his warmth for the author. While reviewing the book Faiz Kavitwam, Rajendra Babu, a lifetime social activist, author, and academician, laid out the history of Progressive literature in India and Pakistan. He provided the backdrop for Faiz Ahmed Faiz's writings and his political struggle against imperialism. Babu then read out a few of the poems of his choice from the book.

Jalajam Satyanarayana is a writer with many works to his credit. He started the magazines known as Dhwani (reverberation), and Kranthi (revolution). He translated many books from Hindi and English such as Vedana, a translation of Jayashankar Prasad's Aansoo, Kabir’s poems, and Shikaram - poetry of Vajpayee, the former PM of India. He has translated Shrinagara Bilhaniyam by Bilahana, a great scholar-poet of Kashmir from the 10th century. This work was chosen for translation to bring to light certain romantic, nonreligious poetry of India.

Jalajam Satyanarayana discussed Faiz's poetry in a poetic fashion, saying that Faiz’s life is a moving, living poem and that Faiz’s poetry is only a footnote to his life. Jalajam said that to understand Faiz’s poetry one has to perceive an ocean in a drop of water. Jalajam spoke about the need for progressive writings, quoting Faiz himself who said “authors have no choice but to be progressive.” He emphasized with need for simplicity in writings. He quoted Sri Sri, an eminent poet who simplified the art of poetry from strict form and diction to smooth and natural. Jalajam is passionate about translations as he explains that translation bring new knowledge from other cultures, bygone years, and other revolutions into our little pot. Translations build the bridge to other cultures and make our little pond of literature wider and clearer.

Earlier, Sushmna Ravi Chander welcomed the gathering. Vaisheshi Rajender introduced the author. Viju Chiluveru presided over the function. Dr. Satyanarayana Reddy and Ravi Ponangi also spoke on the occasion. Ravi Chander of Softpath proposed the vote of thanks. A large number of Telugu speaking community members attended this Telugu literary meet, and all enjoyed the poems rendered by the scholars.