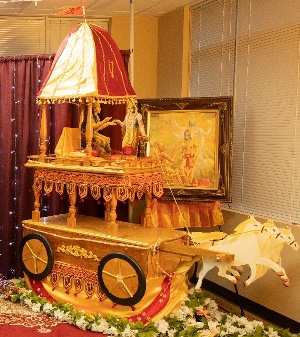 Gaudiya Vaishnava Association (GVA) as part of its Fall Utsav, observed several festivals with beautiful detail, as seen below: Kartik Vrata or DamodarVrata, Shri Govardhan Puja, and the Advent of the Shrimad Bhagavad Gita.

Gaudiya Vaishnava Association (GVA), was founded by His Divine Grace Shrila Bhakti Swarup Tirtha Goswami Maharaj with the sole objective of spreading spiritual awareness all over the world, and to propagate, preach and promote the only means of deliverance: the chanting of the Holy Names of God, Shri Krishna.

Damodarvrata is called the purest of purifiers, most glorious of all months, particularly dear to Krishna, and full of bhakta vatsalya. Daily prayers are made to Krishna in His Damodara form, when his mother put a rope (dama) around naughty Krisha’s abdomen (udara). Ghee lamps were offered and the “Damodarashtakam” was sung.

On the right is the annakut under the samvartaka (cataclysmic) clouds.

Next, Govardhana puja celebrated Krishna, as a seven year old boy, lifting the Govardhana hill on His little finger and protecting the citizens of Vrindavana from the wrath of Indra. An annakut (hill made of cooked rice and other edible items) was built and decorated. Samvartaka (cataclysmic) clouds were set up from the ceiling with Indra and poured rain and thundered very artistically. An elaborate arati was performed to Shri Shri Radha Madanamohana and to Giri Govardhan. Parikrama (circumambulation) of the deities and Giri Govardhan proceeded with ecstatic bhajans, and sweet treats were enjoyed.

A discourse given by His Divine Grace B. S. Tirtha Maharaj was heard. 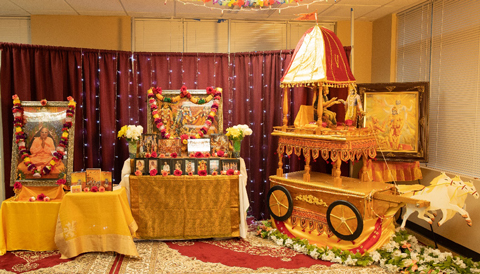 (Left) A mini chariot with Krishna and Arjuna was set up beside the altar.

As the culmination of the fall festival, GVA observed the Advent (Jayanti) of the Bhagavat Gita on December 7, 2019. More than 5,000 years ago Krishna spoke this great scripture to His disciple friend Arjuna in the battlefield of Kurukshetra. Verses from the Bhagavat Gita were read and a discourse given by His Divine Grace B. S. Tirtha Maharaj was heard. A mini chariot with Krishna and Arjuna was set up at the altar. 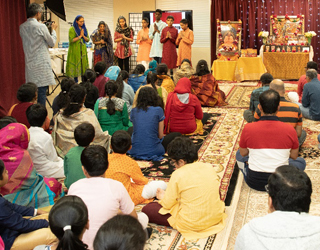 Youth from the GVA Youth Program and GVA Gurukul classes presented many slokas from the Gita and sang a verse from the Gita Mahatmya by Shri Adi Shankaracharya in praise of Krishna as the one God; GVA was founded by Shrila Maharaj to spread spiritual awareness and to promote the chanting of the Holy Names of Krishna, as the verse below says.

The verse from the Gita Mahatmya by Shri Adi Shankaracharya:
ekamshastramdevaki-putra-gitam
eko devo devaki-putraeva
eko mantras tasyanamaniyani
karmapyekamtasyadevasyaseva
meaning
There need be only one holy scripture, the divine Gita sung by Lord Shri Krishna:
only one worshipable Lord, Lord Shri Krishna:
only one mantra, His holy names:
and only one duty, devotional service unto that Supreme Worshipable Lord, Shri Krishna.