Home > Magazine > Around Town > Fall Festivals and the Goddess Kali

Fall Festivals and the Goddess Kali 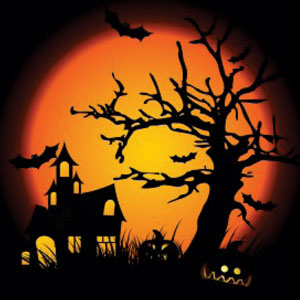 Home Page: The gods asked Kali to vanquish evil, and on Halloween we still enjoy briefly dressing to enter the world of spirits, live and dead, good and evil.

This Page: The ghosts may be about, but we'll live through it!

On the day before Halloween, Brother Shankara of the Vedanta Center of Atlanta gave an informative talk about Fall festivals that celebrate the dead, and their connection to the Goddess Kali. Included were Samhain, All Saints Day, All Souls Day, Halloween (All Hallows Eve), Dia de Los Muertos, and Divali.

He explained the tie between scary creatures and Halloween. Black and orange are the holiday's traditional colors, because they are associated with night and with fire. Can you already hear a whisper of Kali? Samhain—later to be called Halloween—seems to have begun at least 2000 years ago in the Celtic cultures of Northern Europe, where the priests celebrated their New Year on November 1, the end of summer and the harvest season and the beginning of a cold, dark winter, which they naturally associated with death. They asked for protection from wicked souls or spirits roaming about and might hide in costume from them or offer them food to appease them. Then on All Saints' Day (Nov. 1) people would promise to pray for dead relatives on All Souls' Day (Nov. 2).

Many cultures hold a Festival of the Dead, lasting up to 3 days, at the end of October and beginning of November, in honor or recognition of deceased members of the community. In the Andes, in Inca religion the entire month of November is Festival of the Dead. The Ghost Festival is the most popular festival celebrated by Buddhists in different countries including China, Japan, India, Thailand, Malaysia and others. This festival refers to the salvation of anguished souls in Hell and involves offerings of food.

Other examples include people of Central America and Mexico; the Hindus, Pacific Islanders, and Australians; ancient Persians, Egyptians, and Romans; and the northern nations of Europe.

Dia de los Muertos, or Day of the Dead, is celebrated in Mexico. This stems from the ancient indigenous peoples of Mexico who believed that the souls of the dead return each year to visit with their living relatives to eat, drink and be merry, just as they did when they were living—which reminds us in a way of Durga Puja.

The origins of their "Day of the Dead" lies in the Nahua ritual known as "the binding of the years" on November 1. Less than a quarter hour after the midnight of Oct 1-Nov 1, the constellation of the Pleiades pass through the zenith above Tula and Tenochtitlán. And there is the link among all these widespread observances that honor the dead—the star formation we call the Pleiades. The Spanish conquerors of Mexico also found there a tradition that the world was once destroyed when the Pleiades culminated at midnight, the identical tradition that we find in the Far East. Can it be a coincidence that the Goddess we most associate with destruction and dissolution of the world—Ma Kali—is also worshipped at the time of year when the Pleiades are prominent in the night sky?

This festival in Mexico corresponds with that of Janthar-puja, for the first-fruits of winter rice, held in November by the Bengal Santals, who call one of their sub-tribes by the name of the Pleiades, Saren. Western Hindus, who trace their descent from the mother goddess Amba, the chief star of the Pleiades, begin their year with the month Khartik (October-November), which is sacred to the Pleiades. The great Hindu festival of Diwali or Dipavali, meaning a row of lamps, features star-shaped lanterns and includes Kali Puja.

Examining the calendars of other ancient races, we find in Persia, India, Egypt, and the Andean nations, that the month in which our first of November would fall, bears in its name a connection either with the Pleiades or a festival of the dead—and Ma Kali has an appropriate place in it all at that time.

The sword and the flute: Kālī and Kṛṣṇa, dark visions of the terrible and ...
By David R. Kinsley - 2000

Some thoughts on various motivations for dressing up for Halloween:
http://www.elephantjournal.com/2011/10/my-search-for-kali-at-the-halloween-warehouse--marthe-weyandt/