Festival of India returns to a two-day affair 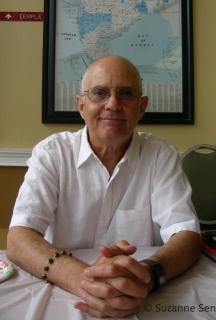 The first day of the 16th annual IACA Festival of India was Sunday, August 19, 2012 at the India American Cultural Association’s Cultural and Religious Center (ICRC) in Smyrna. The varied activities were fun for the whole family: a health fair, cooking demos and competitions, seminars, a game show, and a talent and fashion show. Sanatan Mandir also presented a lecture by author Philip Goldberg, titled “American Veda: How India Changed Our World,” chronicling the history of Indian spirituality in this country and the West, in general, from 1890s to now.

The colors of the Indian flag stood out vividly in the décor of the Gwinnett Center, making the second day of celebrations festive. On August 25, a record number of busy booths offered jewelry, garments, home décor items, travel information, etc. Children were enthusiastic participants in an art competition conducted by Global Arts; more than 100 kids were awarded prizes and certificates for their participation and creative contributions. Seminars made a comeback this year, with current hot topics being discussed: the youth seminar – bridging the gap between first and second generations (Sarung Tripathi & Chetan Hebbale); innovation to and from India by TIE (Moderator C N Madhusudan); Art of Living; Isha Foundation; taxation (Chugg Firm, Shailesh Patel, Avani Patel, Kapil Handa); Sahaj Marg; Type 2 Diabetes; holistic health; and Raksha – involving men in creating peace at home.

The cultural show was a huge crowd pleaser as usual. Among the highlights were “The Legends of India” program which had individuals dressed up as the freedom fighters of India; the Odissi dance recital; dance performance by the students of Chandrika Chandran to the songs by Rabindranath Tagore; a stand-up comedy act by Tushar Singh; contemporary ballet and hip-hop dances by the Royal Dance Academy; many Bollywood dances; a short version of the quiz show “Neelam Ghar” by Aslam Pervez; and much more. This time, it was also refreshing to see dances of the Northeastern states of India as well, such as the lovely Assamese dance presented by some families. 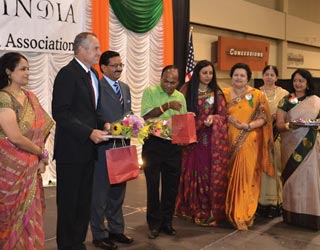 The expansive hall was jam-packed by late afternoon with huge crowds, and festivities continued until 7pm. It was lovely sight to see friends chatting and reconnecting with each other, children learning about Indian history and others enjoying a leisurely afternoon amidst some great entertainment. Comments received showed that the festival was much enjoyed and that the team of IACA Executive Committee and BOD members, headed by FOI Program Director, Lakshmi Vedala, were to be congratulated.

Padma Rallapalli, Chairperson of IACA, welcomed special speakers Lt. Governor Casey Cagle and Honorable Consul General Mr. Ajit Kumar. She highlighted how the team was working towards making a stronger future for IACA by taking some aggressive steps: a vision plan, rewriting the bylaws, revamping the electoral system, expanding the activities to include youth, and a more diverse group of volunteers to reach deeper into the community. Plans for the future include the completion of Sanatan Mandir and building a new community center. President Kaushal Tripathi also gave an enthusiastic speech.

Video:
Youth Forum Video – lively discussion on Bridging the Gap between 1st and 2nd Generations
http://www.iacaatl.org/youth-forum-video-bridging-the-gap-between-1st-and-generation/
The discussion touched various topics from parenting to career choices and how to bridge the cultural gap between first and second generation Indians. This discussion does not end here. Join this site as a user and as a Youth Member Group and post your comments or articles that are relevant to this topic.