Home > Magazine > Around Town > Festival of Lights screens in Atlanta

Festival of Lights screens in Atlanta 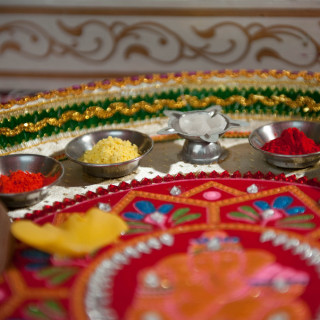 Indo-Guyanese director Shundell Prasad’s feature debut Festival of Lights screened at Atlanta’s Midtown Art Cinema for a limited engagement beginning November 2, 2012. The film is in English, was directed, written, and co-produced by Prasad, and shot on location in Georgetown, Guyana and Queens, New York.

Starring noted Hollywood actor Aidan Quinn and British star Jimi Mistry, the movie revolves around a rebellious teenager, played by Canadian actress Melinda Shankar, who is separated from her father and past life in Guyana due to socio-political strife, and now lives in America with a step-father and her biological mother, played by the lovely Ritu Singh Pande. The film addresses the struggles of people in Guyana, the emotions that would tear any family apart when members are separated, and the lengths to which a single mother will go in providing her child a better life. This background paves the way for the actual story line: Melinda’s character questioning her mother’s actions and wanting to find her way back to the father she remembers but has no connections with any more.

A touching story of a family tragically divided, Festival of Lights is an attempt at bringing to the fore a little bit more about Guyana and its people than most would dare to admit they know. The movie’s title and release date were in line with the Indian festival of lights, Diwali, which is a largely celebrated festival in Guyana, marking solidarity and the overcoming of obstacles, the same feelings the young teenager’s journey portrays in the film.

Director Prasad was available at the Atlanta screening to address the audience and speak a little about her experience making the movie. The three-year-long endeavor came to fruition in 2010 and Prasad is now touring other states in the country screening the movie. “Directing a movie that encompasses my homeland’s story was a profound experience for me; however, I truly believe its themes are universal,” she shared. Prasad’s prior filmmaking venture was a documentary, Once More Removed: A Journey Back to India, tracing her roots to her Indian ancestry and forefathers. The movie was screened theatrically in New York, Toronto, and Atlanta, and was also invited by various governments for screenings worldwide.

On her new film, Prasad adds, “I felt compelled to tell the story of the Indo-Guyanese experience in America and thus began the cinematic journey of creating Festival of Lights. This time I departed from the documentary tradition, which afforded me the opportunity to create and mold a plot with characters.”

An American film director and screenwriter, Prasad has worked for many major media outlets, including The Wall Street Journal and CNN. She began her career at HBO’s highly acclaimed documentary division in New York. For information, visit www.festivaloflightsfilm.com. There is also a page about Guyana on the website, which makes for interesting and informative reading.