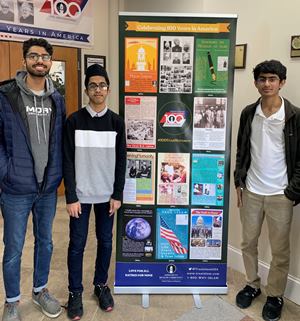 To mark this 100-year anniversary, Ahmadiyya Muslim Community Georgia Chapter has many events and activities planned for 2020, partly as celebration and partly as outreach for understanding. “Last year, Pew Research concluded that 54% of Americans don’t know a Muslim,” said Amjad Mahmood Khan, National Director of Public Affairs for Ahmadiyya Muslim Community USA. “We are committed to changing that figure drastically and hope our fellow Americans will accept our invitation to meet us. We have been here 100 years, deeply love this country, and have a track record of serving this nation and its people since the beginning. We invite Americans to meet us, allow us to learn from one another, and collaborate to make this country the best it can be.”

At more than 60 chapters across the nation, this Centennial year kicked off on Saturday, February 15, 2020 to commemorate the moment that Ahmadi Muslim missionary Mufti Muhammad Sadiq arrived in Philadelphia to spread the message of True Islam.

At Baitul Ata Mosque in Norcross, Georgia, the day began at 5:30am with predawn prayer (tahjjud), morning prayer (fajr), a community service project (collecting canned food items for underprivileged families in the local community), and breakfast. Then at 8:45am the centennial program began with the recitation from the Holy Quran (tilawat), followed by a poem delivered by a group of boys.

Bilal Siddiqui and Atthar Awwan made a presentation, "The Sun Will Rise in the West: The Beginnings of Ahmadiyyat in the USA." They spoke about early Ahmadi Muslims in America, even before the missionary’s arrival. Mr. Hasan F. L. Anderson worked at the First Scientific Station in New York City and was the first convert in 1901. Dr. George Baker of Philadelphia accepted Ahmadiyya Islam in 1903 and wrote, "I totally agree with the views of your Founder [Mirza Ghulam Ahmad]. He has presented Islam correctly to the world just as the Prophet Muhammad had done." After Missionary Sadiq’s arrival, the Muslim Sunrise, a quarterly magazine, was initiated in Detroit in 1921; it is still in publication. The first Ahmadiyya mosque in America was built in Chicago in 1922.

In 2003 Richard Brent Turner, a professor of African-American religious history who accepted Ahmadiyya Islam, wrote, “Ahmadiyya was unquestionably one of the most significant movements in the history of Islam in the United States in the twentieth century, providing as it did the first multi-racial model for American Islam. The Ahmadis disseminated Islamic literature and converted black and white Americans. They attacked the distortions of Islam in the media, established mosques and reading rooms, and translated the Quran into English.” (Islam in the African American Experience, 2nd ed.).

Keynote speaker, missionary Hammad Ahmad spoke on the topic of, “Future of Ahmadiyyat in the United States.” The Community believes that God sent Ahmad, like Jesus, to end religious wars, condemn bloodshed, and reinstitute morality, justice, and peace. Ahmad’s advent has brought about an unprecedented era of Islamic revival and moderation. He divested Muslims of fanatical beliefs and practices by vigorously championing Islam’s true and essential teachings.

Mr. Khairul Bahri, president of Ahmadiyya Muslim Community, GA Chapter, thanked the attendees and concluded the program with silent prayer. More than 250 members attended the celebration with enthusiasm and spirit.

(Left) The food drive for charity.