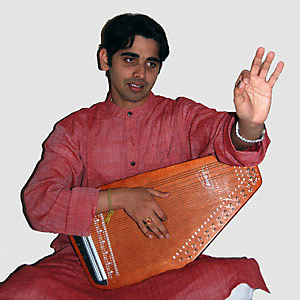 As Atlanta thawed out of the five-day long freeze after the first snowstorm of this year, “Swaranjali,” an offering of Indian classical music, provided a welcomingly warm experience as well as a lesson in something unusual for many who gathered at the First Existentialist Congregation in Candler Park that Saturday evening (January 15, 2011).

Organized by Bob, Sharon, and David Bell, and Madhu Deshmukh, the concert featured the Pandit Jasraj School of Music faculty, Pritam Bhattacharjee on vocals and Prithwi Bhattacharjee on the tablas. It was an opportunity for these new listeners to be exposed to a new genre of music from artists of the highest caliber. About 130 people, 80% non-Indian, were at the concert. Approximately 100 were listening to Pritam and Prithwi perform live for the first time and about 60 were listening to Indian classical music for the first time.

The concert began with three vocal compositions in Raag Madhuvanti, set to various taals. Pritam accompanied himself on the harmonium, with Prithwi on tabla. Two of the bandishes were composed by Pritam himself. A traditional bandish in Raag Behag followed, improvised with several taans or rapidly sung patterns that demonstrated Pritam’s vocal dexterity. As the singing progressed into faster tempos with increasingly complex patterns and rhythmic variations, the audience broke into spontaneous applause several times. Another composition called a tarana followed in Raag Behag.

After intermission, the audience was regaled with a tabla solo that lasted over an hour. Prithwi played several traditional as well as self-composed tabla compositions, beginning with an introduction called peshkar, then kaydas and relas. Prithwi demonstrated the enormous amount of rhythmic variations possible with just a few bols or basic sounds produced by the fingers, such as the sounds of “the te.” He went on to imitate on the tablas natural and everyday sounds such as those of the conch, jumping deer, galloping horses, and a steam engine. Reminding us of his teacher, Ustad Zakir Hussain, Prithwi told stories using tabla patterns, like that of a game of baseball, a quarreling husband and wife, and the sounds of rain with rumbling clouds and lightning.

The concert concluded with another unusual piece, an example of the dhrupad style of singing, which uses no lyrics, but just the sargams and bols of the pakhawaj—the traditional drums that accompany this style. Pritam sang a composition in Raag Miyan-ki-Malhar, associated with the monsoon season in India, and included vocal-tabla sawal-jawabs or question and answer patterns as in instrumental jugalbandi.

Comments indicated that the audience was simply “blown away.” Pritam's vocals were described by first time listeners to Indian classical music, as “mesmerizing voice and style,” “meditative, calming and soothing,” “amazing, never heard anything like this in my life before,” “what a presence on the stage!” People were amazed at how brilliantly the voice can be controlled in the fast tans.

Prithwi's performance left the audience awestruck! “Brilliant,” “outstanding,” “how does he do that with his fingers!” “Magical, excellent, amazing” were heard after his tabla solo. The duet at the end was also hugely appreciated and people would like to hear more such jugalbandi. Nearly 40 people left their contact details at the desk wanting to be informed of upcoming performances.