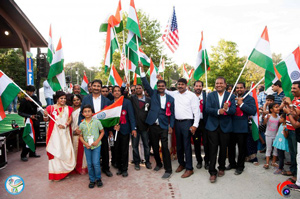 IFA’s main objective for hosting Freedom Mela in an open arena was to bring the Indian community into the mainstream. The venue was attractively decorated to show the rising partnership between USA and India with flags of both countries lining the pathways leading to the entrance to the venue. Inside the venue and on the stage were also the tricolors of India and the star-spangled banner of the USA. A flags-hoisting ceremony had both national anthems. Dignitary guests were felicitated with bouquets, plaques, and shawls. 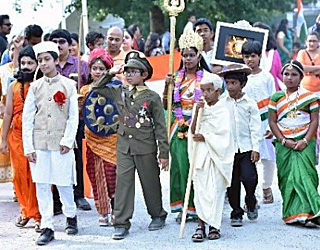 (Left) Some of the children dressed as India's freedom fighters and patriots.

The huge parade followed, where more than a thousand cheerful attendees in colorful attires, representing various states of India and various nonprofit groups, expressed their pride in being Indian, waved tricolors, and shouted “Jai Hind” and “Vande Mataram.” Four camels draped in Indian tricolors led the parade. Manisha Mihir as “Bharat Mata” and adorable kids dressed in white were an uplifting sight. Some young and old participants dressed as India’s freedom fighters and patriots. Chief guests Parthiv, Yamini, and Sravani rode in a decorated Jeep, and there were even motorcycles. The rich diverse culture of various regions was on display as well as the patriotic spirit and unity among Indian states. Parthiv Patel felicitated winners and runners of the IFA’s 2017 Independence Cup Cricket Tournament. 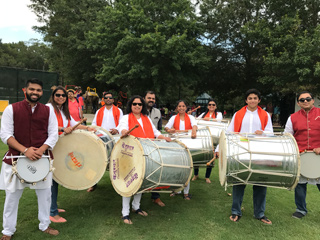 The riveting four-hour cultural program was emceed by Monty Kataria, Ayshwarya Sridharan, and Srivani Krishna. Over 500 participants presented a variety of items, from Gujarati garba to Indian folk dances to Maharashtrian lavani, and classical to contemporary chartbusters. One of the memorable highlights of the show was a standout performance of a captivating dance-drama “Hanuman Chalisa” by Sai Nrityalaya, an enchanting presentation of Kuchipudi, semiclassical, evergreen Hanuman Chalisa and episodes from Ramayana by Pushyami Gottipati and her team of 35 skilled artists. Colors of India Show choreographed by Priya Rathnam was gorgeous. Hair and make-up was by Anita Dosani and jewelry was provided by Suhasini Jewels.

Sunil Savili and Sairam Pamulapati discussed the GA Drivers License issue, expressing their disappointment that of the 183 complainants who were victimized by the Georgia DMV, only four or five were willing to lend their names to IFA’s efforts. “Ultimately only one person came forward. Unfortunately, our people are scared. We must raise our voices to be heard. We must fight for our rights. We are not in the 1960s or 70s. We are a large, successful community. We are taxpayers. We strongly urge all the affected persons to come forward and help IFA. Events like the Freedom Mela are meant to raise our visibility in the community and our access to local authorities.”

The evening concluded with an amazingly beautiful fireworks display, accompanied by the singing of Indian patriotic songs, including “Vande Mataram.”

It was a mammoth Mela which will linger in memory for a long time! 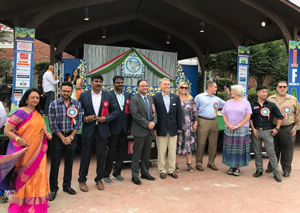 Thanks:
For the first time in IFA history, Freedom Mela was supported by sponsors from other states, prominent among the generous sponsors being Californian Dr. Prem Reddy, Tristate’s Dr. Malla Reddy, K. K. Reddy, Harinath Policherla, and Telangana Peoples Association of Dallas.

Ameet Lilani of DJ Ameet provided great visuals and audio.
Vakiti Creations covered the event through his team of photographers.
Kathyayini Kosaraju Pinnika and Udaya Etoru beautifully decorated the stage.
Hitesh Vadlamudi provided excellent video services.
IFA expressed special thanks to Sunil Kuturu, Srinivas Avula, and TATA for helping throughout the show and for helping out with registration, parking, and parade, and also to Srinivas Peddi of IFA board for leading the 2017 Freedom Mela.