From Waste to Value 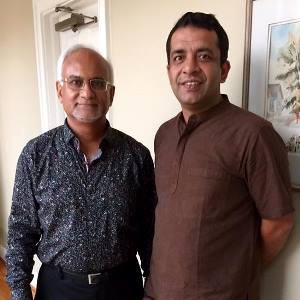 “One man’s trash is another man’s treasure” is a proverb of unknown ​origin. It is literally the basis for Goonj (meaning “echo”), a New Delhi-based organization that endeavors to provide humanitarian aid by channeling discarded materials to those in need.

At a July 16 gathering organized by Mr. Amitabh Sharma under the umbrella of the American Indian Foundation, Mr. Anshu Gupta—founder of Goonj—addressed a mixed-generation audience. Unlike the more familiar modus operandi of charities where monetary donations are invited in support of a cause, Goonj gathers materials instead. Collection centers across India cull rejected items of clothing, household wares, toys, etc., and route them to impoverished areas.

Mr. Gupta has been referred to as the “clothing man” for his efforts to provide clothes to the needy. In conversation, he spoke of an encounter that served as a pivotal moment in his life, one that prompted him to leave the corporate arena and take on the mantle of social betterment. “I met a man in Old Delhi about 17-18 years ago. He was given a few rupees and two meters of white cloth by the government for every unclaimed corpse he removed from the streets. He told me he earned more money in the winter as exposure to cold leads to more deaths.” Mr. Gupta was struck by how little attention is given to the basic need of clothing even though nakedness is the first sign of poverty. “Efforts for providing food and education are much greater. But I have seen how providing somebody decent clothes gives them the dignity they deserve and that in turn helps them get through life.” A documentary film in support of his argument showed moving images of scarcely-clothed people exuding a sense of pride when properly attired.

One of Goonj’s most noteworthy initiatives is ‘My Pad’ where donated clothing is washed, disinfected, and fashioned into sanitary napkins—a product that improves the quality of life for countless women of frugal means. In 2009, the ‘My Pad’ campaign was awarded the World Bank's Global Development Marketplace Award.

Mr. Gupta’s intuitive approach for amelioration is expressed in yet another endeavor where materials are offered to village folk in exchange for work on welfare projects. For this he implements indigenous knowledge and resources. “In one village, we directed the people to dig a well in a spot recommended by the village elders by using whatever tools they had. The materials we provided them for their labor gave them a sense of pride, and in addition, they had created something useful for the whole village,” Mr. Gupta explained.

In 2012 Mr. Gupta was named the Social Entrepreneur of the year by the Schwab Foundation. He is also the recipient of the prestigious Ramon Magsaysay Award (2015). 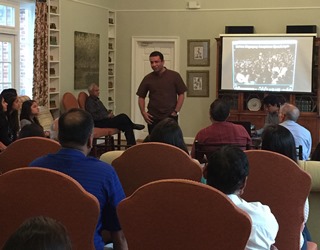 Following Mr. Gupta’s stirring presentation, Ambassador Charles Shapiro, president of the World Affairs Council of Atlanta, and others in the audience posed several thought-provoking questions. The conversation shed light on the logistics of Goonj’s “win-win” model where the debris of urban life is kept from being dumped into landfills and instead channeled to the destitute, often as payment for working on jobs that benefit the entire community. Sonny Yadav, a keen participant in the audience, noted that Goonj’s singular paradigm is “something like the model of Muhammad Yunus, banker of the poor, founder of Grameen Bank of Bangladesh. Once these micro-entrepreneurs established their business and returned Grameen Bank’s money, it made them feel rewarded and proud of their own achievements.”

Mr. Gupta encourages everyone “to take action, not just talk. Giving back to society is not a choice, it is our responsibility.”

Chapter: “The Naked Truth, Anshu Gupta, Goonj” in the book,
I Have a Dream
By Rashmi Bansal, 2011.
Click here.

“Anshu Gupta: The invisible disaster”
Published on Feb 15, 2015
http://inktalks.com
In this hard-hitting talk, Anshu Gupta, founder of Goonj, brings our attention to the most ignored basic human need -- clothing.
https://youtu.be/J67Xxlo-TPk