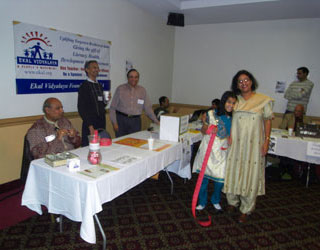 Ekal has been involved in eradicating illiteracy from rural and remote India since 1986. It operates and supports innovative, single teacher informal schools in tribal and rural communities, which lack access to primary education through functional government operated schools. The Ekal movement has helped unite the villages, sparked passion among tribal children for education, curbed social evils such as alcohol consumption and superstitions, and empowered villages to become self-reliant through knowledge. Currently there are 34,343 Ekal schools in operation in all the states of India with over 962,000 students.

The evening began with dinner catered by Ashiana Restaurant. VHPA was generous to provide hot tea after the dinner, and Global Mall owner Shiv Aggarwal provided the hall, manpower to arrange the event, and much more. Films showing current Ekal schools and activities were screened during the dinner hour. The program started at 7 pm sharp with lighting of diya by Smt. Gayatri Subramanian, cofounder of KA Academy. Emcee Radhikha Suda introduced Sherin Peter, a senior disciple of Gayatri Subramanian, who performed "Pushpanjali," a traditional invocation in Bharata Natyam, followed by Ganesh Sthuthi and Lord Shiva Sthuthi.

A new concept was the Kinderchoir, a kids' choir performing to original music pieces built on the building blocks of Indian classical music. This innovative choral music workshop, designed to kindle the musical artist in every child, has been orchestrated by C.V. Subramanian, the music director of KA Academy.

Kumud Savla showcased her students from Nritya Natya Kala Academy, from 9-year-old kids to teenagers. The stage was a panorama of color as her disciples-manmohinis danced to “Mujhe Rang De,” and other students did the Bhangra dance on “Rang De Basanti.”

The Shaam-e-Sargam group founded by Navin Tyagi, as its name suggests, added a splendid amount of music. Over 50 songs, solos and duets, were presented by its members, especially Shyam Gupta and Rekha Pallath, whose songs brought the audience to the stage to dance.

Ekal volunteer Radhika Suda charmingly emceed the show and solicited school sponsorships. Ekal schools can be sponsored with a payment or pledge of $365, i.e. a dollar a day to establish and run a one-teacher school for an entire year. Ekal was ably assisted by SEWA volunteers who completed secure online transactions for donors to sponsor schools by credit card. A raffle with $1 tickets also provided for one school. The winners of the 32” TV and $50 gift card very generously donated for three schools on the spot. The evening raised $ 22,000 supporting 60 Ekal schools.

Southeast Regional President Chander Aggarwal and Atlanta Chapter President Shiv Aggarwal gave certificates of appreciation to the artists and SEWA Volunteers and a vote of thanks to all the sponsors, sound system provider Sandeep Savla, Ashiana Restaurant, Ekal volunteers and audience.