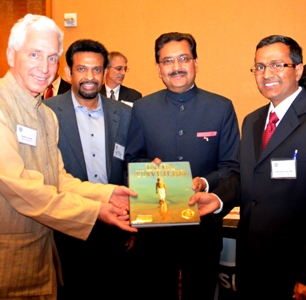 The Georgia Association of Physicians of Indian Heritage (GAPI) held its 25th Annual Convention and banquet at the Crowne Plaza Ravinia, on April 13, 2013. The gala event was attended by over 250 members.

Consul General Ajit Kumar attended the Social Hour and met Congressmen Rob Woodall and others. He lauded GAPI for doing sterling work in healthcare and education and also providing health care to uninsured and indigent patients through health fairs and the charitable volunteer clinic at Global Mall in Norcross.

Attendees could network, enjoy Café Bombay snacks, and visit booths of pharmaceutical corporations, banking and insurance providers, health care related businesses; and nonprofit Isha Foundation. Mumtaz Fashions was present, and Robert Arnett, author of the award-winning India Unveiled and Finders Keepers also had a booth along with Smita Turakhia, illustrator of the Spanish version of his children's book.

The program was emceed by UGA student Karishma Amin and Lakeview Academy school student Dhruv Gaur. After GAPI President Abhishek Gaur welcomed all, Karishma, Dhruv, and Garv Gaur recited a prayer to Lord Ganesha. Karishma gave a brief history of GAPI, and Congressman Woodall (R-7th Dist. of GA) lauded the Indian-American community for taking care of one another. He voiced his concern at the decline of private practice due to ridiculously low reimbursement to physicians. He urged the audience to share their experiences and problems with elected representatives.

Dr. William Silver, president-elect of MAG, told of its 7,000 physician members and commended Dr. F. Yousuf for his initiative in founding GAPI. He described the role of a physician as different now: not only practicing medicine, but also involved in community, helping in medical education, and supporting elected officials. He warned the audience of the problem of overdose of narcotic drugs: “More deaths are caused by prescription drugs than street drugs, so please support the National Prescription Drugs Take Back Initiative,” he said.

AAPI President Dr. Jayesh Shah noted that “one in seven patients is seen by a physician of Indian origin. … The major problem we currently face is childhood obesity. Let us bring awareness of this problem all over the U.S. and even globally. Let us adopt 100 schools in 50 States, educate our children, and save the future generation. …The first school has already been adopted in Tulsa, Oklahoma. Only yesterday USAID has recognized our role. We have formed a Shankar Mahadevan Team in your city: Dr.Naresh Parikh, Dr.Jayesh Shah, Dr. P. K. Natrajan, Dr. Ravi Jagirdar, Dr. Abhishek Gaur, Dr. Piyush Patel, Dr. Sudhakar Jonallagadda, and Dr. Sreeni Gangasani.” 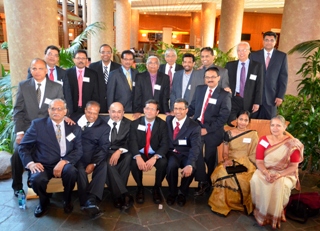 Outgoing President Dr. Abhishek Gaur reviewed 2012 activity: members enrolled, an educational meeting, Shreya Ghoshal concert to raise funds for the clinic, two health fairs (at Global Mall with SAI and in Columbus). He thanked Dr. Sujatha Reddy and Dr. Piyush Patel for their pivotal role in these Health Fairs. GAPI partnered with the annual meeting of urologists of Indian origin and participated in the Regional Bengali Conference, Vibha dream mile, the new Hindi language program at Georgia Tech, and Ekal Vidyalaya. He thanked Shiv Aggarwal for accommodation for the GAPI Free Clinic at Global Mall. Three regional meetings were held (Columbus, Valdosta, and Dublin, under the leadership of Dr. Piyush Patel, Dr. Arvind Gupta, and Dr. Raghu Lolabattu). He stressed that as Dr. Kamath said the future of GAPI lies with the young generation. To help young students, GAPI had a new project, “Shadowing opportunities for IMGs and students prior to the residency programs.” GAPI had also initiated a second project, “Supporting Culturally Sensitive Senior Care Program” for physicians to help seniors and also arrange for chaplain’s or priest’s services where needed. Dr. Gaur thanked all, including his wife Dr. Swati Gaur and his son Dhruv for assisting with GAPI's administrative and secretarial work.

Dr. Naresh Parikh spoke of the AAPI Charitable Foundation, which runs 11 clinics in India, providing free medical treatment to one million patients, and several clinics in U.S. including the GAPI Free Clinic at the Global Mall. Annual funding of $300,000 is raised through concerts, etc. President-elect Dr. Ravi Jagirdar said that the Shankar Mahadevan concert will have three sections: (i) educational, (ii) community Outreach for childhood obesity, and (iii) cultural. The trio of Shankar, Ehsaan, and Loy will help GAPI raise funds on June 23, 2013 at Cobb Energy Concert Hall, Atlanta. – 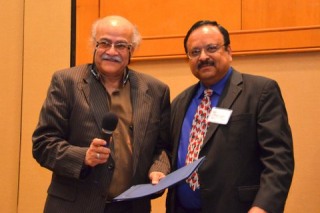 Dr. Vinayak Kamath lamented that the second generation is not anxious to join professional or social networking sites, and apparently do not do as well as first generation professionals. He exhorted the GAPI members to reach out the young generation and emphasize the importance of joining AAPI, GAPI, MAG, etc. 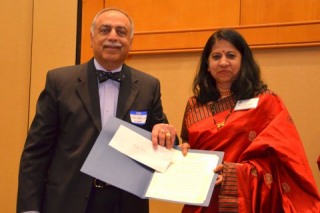 Among Sneha Mehta's projects is working to help refugees from Bhutan. She has raised funds and collected medications for them; organized vocational, language, and driving classes; and helped acquire vehicles for them through a car donation program. She has been active in many nonprofits, worked for the homeless and for children, and in India worked in rural communities to help preserve handicrafts and provide employment to the poor.

Incoming president Dr. Piyush Patel's goal is "to expand the membership base, by enrolling especially the second-generation Indian-Americans and also nonphysician health professionals," as well as improving the website.

After a delectable dinner members were treated to a Zumba and Fusion Group’s exhilarating dances and later to a high-octane Bhangra dance by Emory University’s Karma dance group, followed by Bollywood music from Dr. Amit Chakrabarty and Aparajita of Geetanjali Music Group. Photos and sound by SaNiDhaPa.