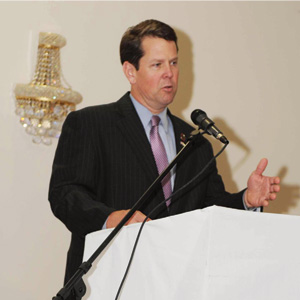 Speaking to the Indian Professionals Network on May 10, 2011, Georgia Secretary of State Brian Kemp said a tough economy and budget cuts may present short-term challenges but the state’s overall competitive position for attracting and retaining business is “still strong, and we’re poised for more success as the economy improves.”

On the economic development front, Kemp said he was particularly excited about Governor Nathan Deal’s Competitiveness Initiative, something he and Lesser had “worked on for a long time.” With this Initiative in place, Kemp said the state’s already strong position will improve. “We’re a competitive state. Our per capita spending is almost as good as anybody in the country, and we’re one of the single-digit number of states that have a triple-A bond rating, and we’re poised to make a good run when this economy comes back—hopefully sooner rather than later—because we have great leadership in our state..”

Asked about the immigration bill HB 87, which Governor Deal has now signed into law, the Secretary downplayed the impact. “It’s a tough issue. Because the federal government has not addressed immigration, citizens are calling on their representatives in districts around the state to deal with it.” Noting that as Secretary of State he did not have a vote on the matter, Kemp said he thought the bill represented a balanced approach. “Everyone in Georgia and in the legislature recognizes we operate in a global economy, and we need to treat it that way. But we also have to recognize the downside of illegal immigration and how that drains services taxpayers are providing. Time will tell, but I don’t know that the repercussions will be quite as bad as portrayed. No matter what is said about the immigration bill, you can’t say we’re not competitive in Georgia from a business perspective.”