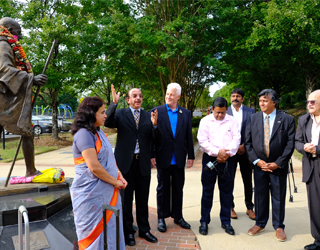 On the crisp and breezy fall morning of October 2, 2021, the front lawn of the Indian Consulate in Atlanta was brimming with a select few invited from the Gandhi Foundation of USA and its patrons, besides the Consular staff. Flowers were snipped and readied to be showered on the newly installed bust of Mahatma Gandhi on the manicured lawns as well as for the garlands that would adorn the statue’s neck.

Once the initial meet and greet was complete, Dr. Swati Kulkarni, Consul General of India in Atlanta, led the guests to the bust and laid a garland on the statue. The guests followed her to garland and shower flower petals on the statue to pay homage to one of the world’s greatest apostles of peace.

Once the homage was duly completed, the guests followed her inside the Consulate where Dr. Kulkarni spoke about the relevance of Mahatma Gandhi in the U.S. and his association with Dr. Martin Luther King, Jr. which inspired Dr. King to adopt non-violence and civil disobedience during the Civil Rights Movement. 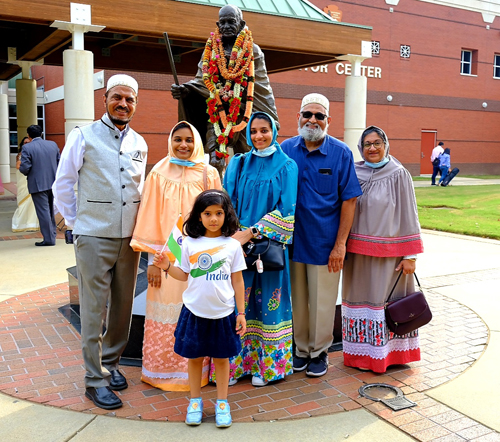 Dr. Kulkarni also showed a small clip of Yugpurush, the famous play written by Uttam Gada and directed by Rajesh Joshi. Based on Mahatma’s relationship with Jain spiritual leader, Shrimad Rajchandra, the play highlights the influence of Jain teachings of non-violence on Gandhi and how it affected his spiritual journey. After the footage was viewed, the guests were treated to a Hindi song based on Mahatma sung by a little girl.

[​Right] The Bohra community with the little girl who sang a Hindi song based on Mahatma Gandhi.

More celebrations were observed in the afternoon at the Gandhi statue installed in the foyer of Dr. King National Historic Site in Atlanta. Guests, along with Dr. Kulkarni, garlanded the statue and paid homage.

Sunil Savili of Indian Friends of Atlanta and Rita Dannenberg of American Prestige Care, whose birthdays also fall on October 2, garlanded the statue along with patrons of The Gandhi Foundation of USA. The gathering was treated to fresh boondi laddoos arranged by Mustafa Ajmeri as they continued to the King Crypts to pay homage. Once that was complete, the program came to an end and guests departed to their respective destinations.