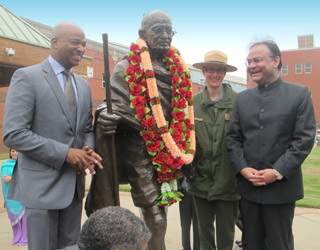 Gandhi Foundation of USA (GFUSA) commemorated the 146th birth anniversary of Mahatma Gandhi in front of the Gandhi statue in the Martin Luther King, Jr., National Historic Site on Friday, October 2, in association with the King Center, National Park Service, and other partner organizations.

Consulate General of India in Atlanta, Nagesh Singh, who was the chief guest on the occasion, garlanded a life-size bronze statue of Gandhiji, flanked by Atlanta City Council Member Kwanza Hall, officials from the National Park Service and members of the GFUSA. While speaking on the occasion, Mr. Singh impressed upon the gathering the need to imbibe some ‘Gandhian values’ into their day-to-day lives to make the world a better place. He also highlighted the Mahatma’s philosophy of non-violence and its importance in present times. Extolling the many historical links between Gandhiji and the United States, the CGI said that the Mahatma’s philosophy of satyagraha or passive resistance was inspired by “Letter to a Hindoo”, the communication between Taraknath Das of Gadar party in California and Leo Tolstoy. Even 70 years after his assassination, Gandhiji’s ideas remain powerful and relevant, seen against the backdrop of the political turmoil in the Middle East, climate change, race relations and other problems the world is confronting.

Anthony Thaliath, Executive Director of GFUSA, opened the proceedings with a welcome address followed by Subash Razdan, Chairman of GFUSA. Razdan spoke about the history of Atlanta’s Gandhi Jayanti celebrations since 1983 and the support received from Mrs. Coretta Scott King, government, and local organizations.

Neera Bhal rendered Gandhi’s favorite bhajans (Hindu devotional songs) Vaishnava Janato and Raghupati Raghava Rajaram. A traditional Gandhi birthday cake was cut and shared. Later, at the Gandhi statue, CGI Nagesh Singh led the gathering in a Peace March to the King Crypts and laid wreaths at the Crypts of Dr. King and his wife Mrs. Coretta Scott King, across the Memorial of the Eternal Flame that symbolizes Dr. King’s commitment to eternal hope and truth.

Peace prayers were also held for those who drowned at the Savannah Ganesh immersion at Tybee Island, Savannah. Nimesh (Lucky) Patel and Darshil Patel were recognized for their bravery in saving lives of others in the tragedy.