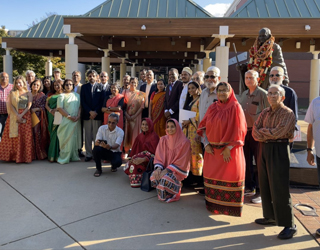 The Indian Consulate in Atlanta, in collaboration with Gandhi Foundation of USA (GFUSA), celebrated the 153rd birth anniversary of Mahatma Gandhi in front of the Gandhi statue at the Martin Luther King Jr. National Historical Park in Atlanta on October 2.

Dr. Martin Luther King Jr.’s nephew and former President of the King Center, Isaac Farris, andConsulate General of India in Atlanta, Dr. Swati Kulkarni—both of whom were chief guests on theoccasion—garlanded the statue of Mahatma Gandhiin presence of the community. 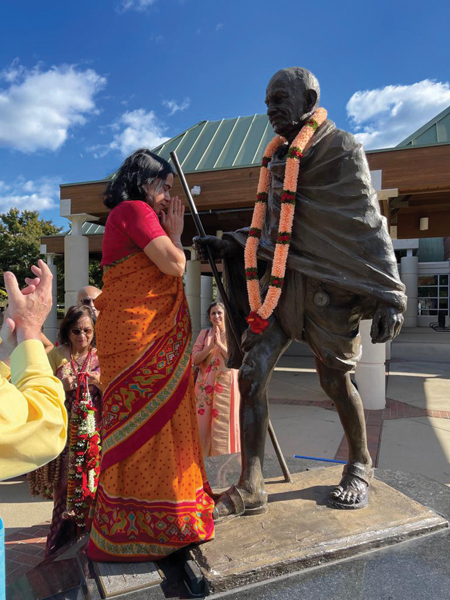 The officials from the Park, Rajeeb Bhattacharya from the Consulate, and other communityleaders paid floral tribute to Mahatma’s statue. Farris shared how his aunt Coretta Scott King had envisioned having Mahatma’s statue at the entrance of King Historical Park and said they have a sense of pride.

Addressing dignitaries on the occasion, Dr. Kulkarni urged the gathering toreflect and rededicate themselves to Mahatma Gandhi’s noble ideals of nonviolence, truth, and tolerance, andstrive to build a better tomorrow that is more peaceful, truthful, and tolerant. She said these are globally relevant ideals and have inspired millions around the world including Dr. King, Nelson Mandela, and President Barak Obama. She further said October 2 is special because it is the 153rd birth anniversary of Mahatma Gandhi, the 118th birth anniversary of Lal BahadurShastri,as well as the 93rd birthanniversary of Dr. King and the 63rd anniversary of Dr. King’s visit to India.

Earlier, Anthony Thaliath, Executive Director of GFUSA, had opened the event with awelcome address. He was followed by Subash Razdan, Chairman of GFUSA, who recognized the volunteers of the Foundation and staff of the Consulate. Razdan also presented certificate of appreciation to volunteers who took care of India booth at the recently held international community expo at the King Center.

Sreedevi Ranjit, the Artistic Director of Laasya School of Performing Arts, was alsofelicitated by Farris for her contribution towards promoting the Indian classicalartforms in the U.S. An award with a shawl was also conferred on Mahadev Desai, a well-known veteran journalist in Atlanta’s Indian community. Rushi Peetham, Dharmika, Praja Bandhuvulu, and other Atlanta community organizations were also felicitated on the occasion. 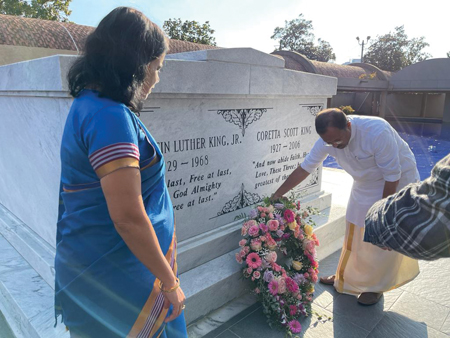 Mohsin Bharmal, the Treasurer of GFUSA, made concluding remarks. Namrata Sharma from Indiapresented two beautiful paintings, one to GFUSA and another to Honorable Farris.

Later, Dr. Kulkarni led the gathering in a Peace March to the King Crypts and laid wreaths at the crypts of Dr. King and his wife Coretta Scott King.

V. Muraleedharan, the Indian Minister of State for External Affairs & Parliamentary Affairs, who was on two-day visit to Atlanta, also visited the Gandhi statue in King Center and led the congregation in a Peace March to the King Crypts and laid wreaths at the crypts of  Dr. King and his wife Coretta Scott King. He was accompanied by Dr. Kulkarni, Razdan, Farris, and Barbara Harrison, Director of International Affairs at the King Center.