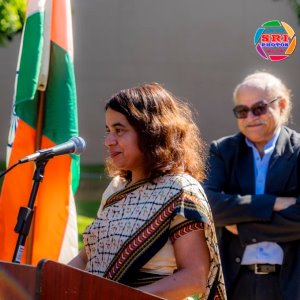 Homage and Lunch at the Statue:
The Gandhi Foundation USA (GFUSA) together with the Consulate General of India, Atlanta, celebrated the 149th birth anniversary of Mahatma Gandhi, honoring his legacy as well as the memory of Dr. Martin Luther King, Jr. and former Prime Minister of India Lal Bahadur Shastri, at the Gandhi Statue at the MLK Jr. National Historical Park in Atlanta on October 2, 2018. The gathering also recognized the 2007 U. N. Proclamation of October 2 as the International Day of Non-Violence. 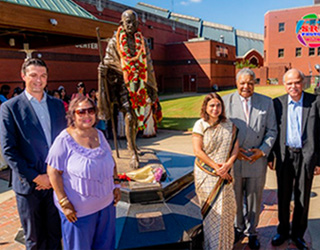 Attending were Consul General Dr. Swati Kulkarni, Consulate officers/staff, Chairman of Fulton County Board of Commissioners Robb Pitts, numerous other dignitaries from District 2, which is the home of the statue and King Center, various community leaders, and the winners of a recently organized beauty pageant in Atlanta.

After floral tributes at the statue, GFUSA Executive Director Antony Thaliath spoke about the inspiring cofounder and former Executive Director Giriraj Rao, and then invited Chairman Subash Razdan to preside at the devotional service.

Razdan reminisced about the installation and unveiling of the Gandhi statue by Ambassador Andrew Young, 20 years ago on a cold blistering January morning with over a thousand in attendance. Razdan thanked the Indian Embassy, India Council for Cultural Relations, and various community organizations as well as the National Park Service, for making the installation of the Gandhi statue in Atlanta possible, as it serves as a beacon for Nonviolence and Peace for a million tourists who visit the venue annually.

Razdan then introduced the Guest of Honor, Hon. Robb Pitts as a great friend of the Indian diaspora and a frequent visitor to and lover of India. Chairman Pitts emphasized the influence Gandhi had on Dr. King and thus the virtual hand guiding the U.S. civil rights movement. Pitts welcomed Dr. Swati Kulkarni as India’s new Consul General in Atlanta and wished her a successful tenure.

After a rousing introduction by Greg Pridgeon, Vice Chair of GFUSA and former Chief of Staff of City of Atlanta, Dr. Kulkarni responded by appreciating the good work done by the Indo-American community and the support by the King Center and National Park Service. She recalled from her previous diplomatic assignments the extent of relevance of and reverence for Mahatma Gandhi.

John Naugle of GFUSA introduced Atlanta City Councilman Amir R. Farokhi, who remarked, “Atlanta is a city of peace and social justice because of Mahatma Gandhi and his influence on Dr. King. Indeed, it is remarkable that a boy from a small port town in Gujarat, who simply liked to twist the ears of dogs as a child, went on to influence the world toward peace and equity, even today 150 years after his birth. Atlanta and Gandhi are forever linked.”

S. M. Khan, former Press Secretary to President Abdul Kalam and former Director General of Doordarshan TV of India, told interesting anecdotes about Gandhi, from his book The People’s President, which he presented to Dr. Kulkarni.

Introducing Dr. Hilda Tomkins, Senior Director of the King Center, Razdan recalled many Gandhi/King celebrations in Freedom Hall. Dr. Tomkins read out greetings from Dr. Bernice A. King, CEO of the King Center, and she and Robb Pitts presented a certificate from Bernice King to Vice Consul Bikash Kumar.

Praful Desai, his wife Mukti Desai, and Dr. Rajul Gokarn, along with Chitra Venkat of the Consulate, led the gathering in two of Gandhi’s favorite bhajans, “Vaishnavo Jana To” and “Raghupati Raghava Raja Ram.” Greg Pridgeon led in singing the reverberating Civil Rights anthem “We shall overcome.”

Consul General Dr. Kulkarni was joined by the distinguished guests and Sunil Savili and Rita Roy Dannenberg (also born on October 2) at the cake cutting ceremony.

Tributes, cultural program, and dinner at the Consulate:
Consul General Dr. Kulkarni welcomed the gathering of over 200 at the Consulate in Sandy Springs. She urged the audience to honor Gandhi ji’s life by personal transformation and striving to promote global nonviolence, peace, equality, and justice. 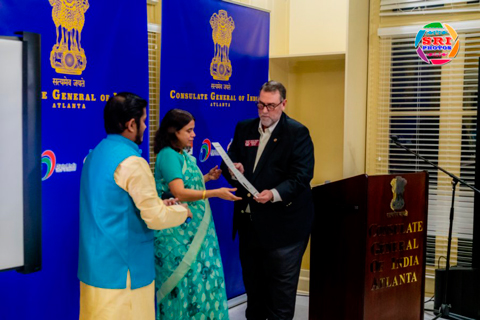 Representative Pedro Marin expressed his joy in attending and read the proclamation by the Georgia Governor declaring October 2 as the Mahatma Gandhi Day in Georgia.

Hindi scholar Dr. Mridul Kirti spoke in Hindi, saying that Mahatma Gandhi was a maha atma because he practiced what he preached. He was a seeker of Truth, a fearless leader, and uncompromising practitioner of ahimsa.

Razdan thanked Dr. Kulkarni for the historic opening of the doors of the Consulate for these joint celebrations with GFUSA.

The participants in the elegant khadi show at the Consulate.

A brief cultural program included dances set to Bollywood songs by Hetal Mehta and Anima Das. There was a soulful violin performance by Pranav Swaroop and a mesmerizing flute presentation by Sai Kishore. Little tots performed. Anya Rathi won the hearts of all with her animated dance to Rabindranath Tagore’s “Ekla chalo re,” and Dheeraj and Tavisha Lunawat and Prameeti Vohra recited a poem, “Mahatma ka Bharat.” Atlanta designer Kavita Bathija showcased the upcoming khadi-themed textile show. The cultural segment ended with the national anthem “Jana Gana Mana” played by Prameeti Vohra on her viola. 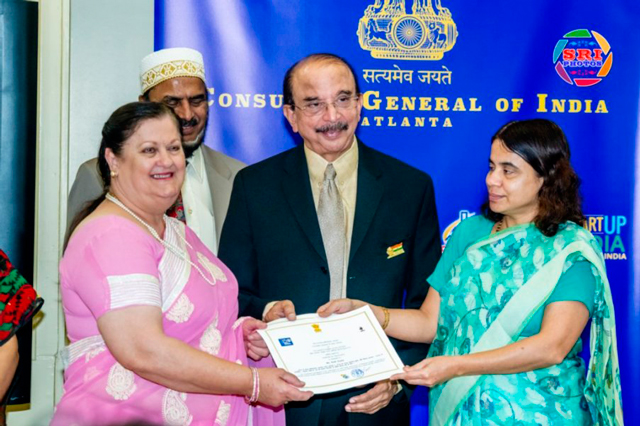 Certificates were presented for outstanding service, volunteerism, and promotion of Indian arts and culture with the highlight being Ruth Gupta’s “Feeding the Hungry” volunteers of the last 20 years.

The Indian-American community left the Consulate convinced that the torch of Gandhi (and King) continues to be the lighthouse for humanity, and anticipating the year-long 150th Birthday ceremonies ending Oct 2, 2019.

Thanks:
Snacks at the statue were catered by Sanjeev Ade of Deliyo Inc.