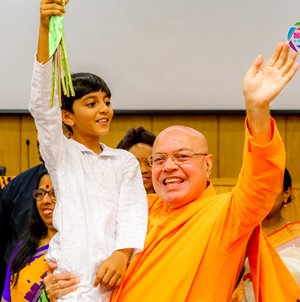 India’s Prime Minister Narendra Modi had declared that Gandhi’s 150th Birth Anniversary would be celebrated not only on October 2, 2019, but also from 2018 until 2020, and that too, globally. Gandhi’s birth anniversary is now also celebrated throughout the world as International Day of Nonviolence, the ideal that Gandhi fought for throughout his life.

The Consulate General of India in Atlanta, the Gandhi Foundation of USA (GFUSA), and the Atlanta Hindi theater group Dhoop Chaoon, with support from the larger community, gave a three-part celebration on Wednesday, October 2, 2019. 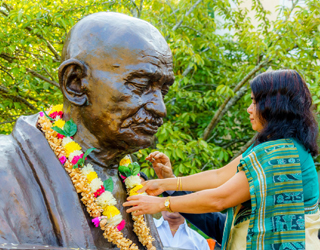 In the morning, on the lawns of the Consulate, the newly installed bust of Gandhi was draped with flower garlands placed as a tribute in his honor by attendees, staff, and the guest of honor Pujya Swami Adhyatmananda, president of Shivanand Ashram, Ahmedabad in Gujarat. 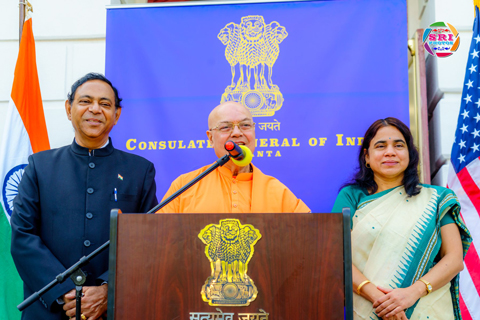 Emcee for the event was the likeable Consul Shailesh Lakhtakia, who never fails to bring his sense of humor to all events and who was ably supported by Consul Asim Kumar. Swami Adhyatmananda from India, who is not only a staunch believer and follower of Mahatma Gandhi’s principles but also experienced the touch of Bapuji, and whose grandparents were companions of Mahatma Gandhi in the Dandi march; Isaac Farris, Jr., nephew of Dr. Martin Luther King, Jr.; and Dr. Swati Kulkarni, Consul General of India in Atlanta, shared their insights on Gandhi.

The second part of the program was orchestrated in the early afternoon. Associates of GFUSA hosted a “Feed the Hungry Lunch” at Ebenezer Baptist Church. Meanwhile, others gathered at the life-sized statue of Gandhi at the MLK Jr National Historic Site: besides the GFUSA team leads Subash Razdan and Antony Thaliath, guests included Mr. Isaac Newton Farris, Jr., Greg Pridgeon (Vice Chair of GFUSA), CG Dr. Kulkarni, and Pujya Swami Adhyatmananda. Perching themselves on the base of the statue, and reaching high, they garlanded Gandhi ji with a prayer. With the afternoon sun at full beam, they made their way in a quiet march towards Dr. and Mrs. King’s crypts where they placed floral tributes to the honored couple—since in America, one cannot fully celebrate Gandhi without celebration of Dr. King as well.

The gathering then moved to the newly built auditorium at the Knowles Conference Center at the College of Law, on the Georgia State University campus. There, emcee Subash Razdan welcomed all. Consul General Dr. Swati Kulkarni, in her friendly and practical way, spoke about Gandhi and King, the new bust of Gandhi on the Consulate lawns, and the fact that we are also celebrating the birthday of Lal Bahadur Shastri and Kasturba, the 90th birth anniversary of Dr. King, 60th anniversary of Dr. King’s visit to India, and 550th birth anniversary of Guru Nanak. She sought the community’s support in passing the bill, “Gandhi–King Scholarly Exchange Program” introduced by the Congressman from Georgia, Rep. John Lewis, to foster the ideals of nonviolence and peaceful social transformation. The bhajan “Raghupati Raghav Rajaram” that Gandhi loved was sung.

Swami ji sang a dhun which honored all the main religious sects of India, and noted the need for Truth and Nonviolence around the globe; he highlighted Gandhi’s secular view for all Indians. Two more bhajans followed: “De di hamein azaadi” and “Vaishnava Janato.” 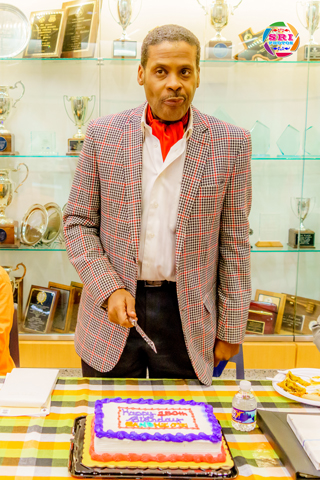 The keynote address was delivered by Dr. King’s nephew, Isaac Farris Jr. He spoke of the impressions his uncle had left on him of the Gandhian influence and the way to win the racial divide. He declared that even though his uncle was a Christian and the Mahatma was a Hindu, but both men were militant ecumenicists who believed that all religions had something valuable to contribute to making our world more just and humane. He said that if not for Gandhi’s courageous example, America might still be mired in dehumanizing legal racial segregation; it was the method of nonviolent resistance pioneered by the Mahatma and adopted by MLK Jr. that transformed America into a true human democracy. 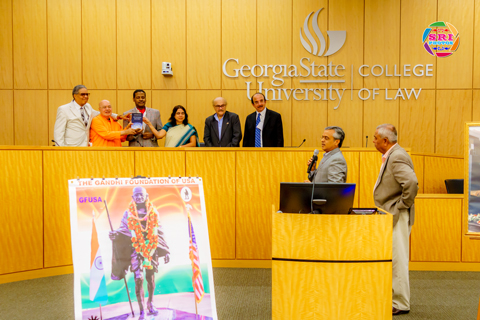 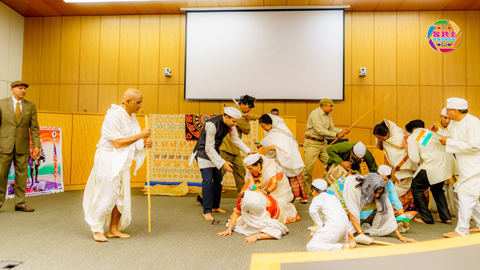 (Left) A scene from From Gandhi to Mahatma, a play presented by Dhoop Chaoon—the episode of Dandi March where police are beating satyagrahis. (Photos: Sri Photos)

Then came the evening attraction: From Gandhi to Mahatma, a play in English, presented by Dhoop Chaoon. The seasoned actors were a delight to watch, although the presentation was on the floor in front of the seating, not ideal for sight, light, or sound. Actors and narrators took the audience through the different stages of Gandhi’s life. 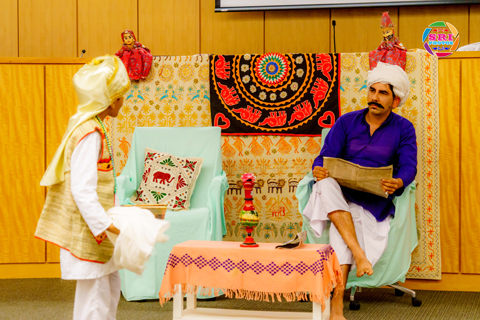 The youngster who played young Gandhi spoke fearlessly and with proper diction. Makeup, including the bald hairdo, was so proper that one could not make out the difference despite the close quarters. The audience, with eyes brimming with tears, gave the cast a standing ovation. 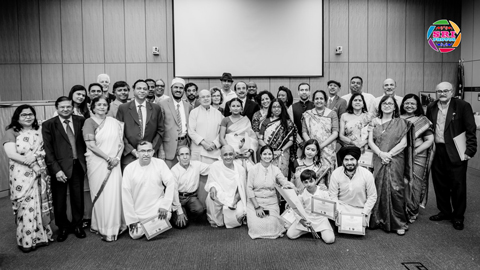 This was followed by everyone singing the Civil Rights anthem, “We shall overcome” and the Hindi version, “Hum hoge kaamyaab.” Outside the auditorium, “Happy Birthday” was sung for Gandhi ji and a birthday cake was shared. Delicious food was also catered by Swapna Indian Cuisine of Smyrna, GA.

The 4-hour-long evening program and other orderly festivities were thoroughly enjoyed by all.

TV Asia: highlights of this event. Special thanks to Anjali Chhabria (our team member too) & Anwar Azameri for covering the show.
https://www.facebook.com/sandhya.bhagat.5/videos/10157764294768474/