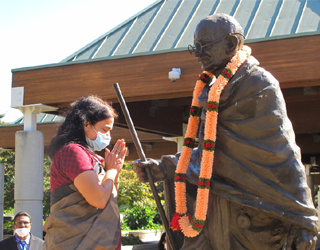 The Gandhi Foundation USA (GFUSA) together with the Consulate General of India, Atlanta, celebrated 151st birth anniversary of Mahatma Gandhi on October 2, 2020. This day is also marked as ‘The United Nations International Day of Nonviolence.’

The celebration, at the Gandhi Statue on the grounds of Dr. Martin Luther King Jr. National Historic Park, was attended by dignitaries, Dr. Swati Kulkarni, Consul General of India in Atlanta, and Georgia state senators Angelika Kausche and Sheikh Rahman.

Dr. Swati Kulkarni garlanding the statue of Mahatma Gandhi at The King Center on the occasion of Gandhi Jayanti.​

[Bottom] Dr. Swati Kulkarni, Consular General of India in Atlanta with Georgia state senators Angelika Kausche and Sheikh Rahman, and other dignitaries at the Gandhi statue at The King Center, Atlanta.​ 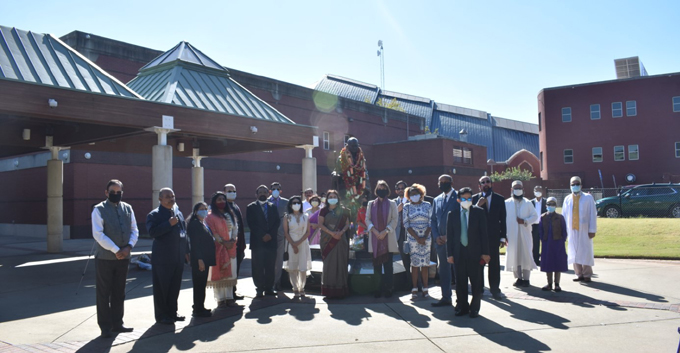 After paying floral tributes at the statue, the program started with an invocation by Venkatachalam Udhaya Kumar, PhD. from CDC. He rendered a poem on the life story of Mahatma Gandhi and Dr. King. He also said that Gandhi statue on the hallowed grounds of The King Center center symbolized a shared call to justice and freedom for all.

Speaking on the occasion, Dr. Kulkarni reminded that this event was a culmination of the yearlong festival of last year’s activities. “We celebrated 150th birthday of Mahatma Gandhi, 90th birth anniversary of Dr. Martin Luther King Jr, and 60th anniversary of King’s visit to India which is well known as King’s pilgrimage to India. Today we are celebrating all those activities.”

She also remembered Congressman John Lewis and said that he was a champion of civil rights, nonviolence, and Gandhian values. His legacy as well as of Gandhi will continue to endure and inspire all of us. Dr. Kulkarni said Mahatma Gandhi was a multi-faceted personality. He gave two most important watch words, Satyagraha and Sarvodaya. Satyagraha means to remain steadfast to truth and Sarvodaya means upliftment for all. She noted that Government of India (GoI) policies adhere to these two principles.

She said India’s developmental policies are people-centric and humane, and that the country is moving briskly towards elimination of poverty. Mahatma Gandhi was the first who talked so much about the importance of sanitation,and is reflected in GoI’s Swachh Bharat Mission, also known as Clean India Mission. GoI is providing the much needed electricity, water, and housing to the communities. India has undertaken ambitious infrastructure development activities like developing roads, highways, bullet trains, launching moon mission, etc.

Most importantly during the present Covid times, India ha shown the world that it is the pharma capital of the world. India has supplied international quality medicines at affordable costs to the world. Domestically, under the National Health Protection Scheme, 500 million Indians have been enrolled and are getting affordable treatment for coronavirus as well. GoI has also provided cooking gas to 80 million families. All these activities are guided by Gandhian thoughts and philosophies, Dr. Kulkarni said.

On the international front too, the Indian goals are also reflective of Gandhi’s philosophies such as the country’s membership in International Solar Alliance as well as the seat in UN Security Council where it serves as a proponent of international law. She exhorted the community to imbibe his timeless message and make the world a better place to live in. 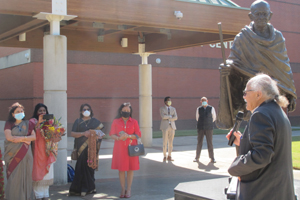 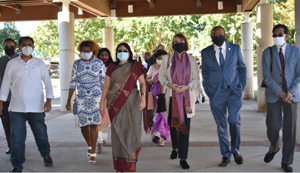 Angelika Kausche, the Democratic State Representative for Georgia House District 50, said that the entire world is celebrating the life of a giant who played a prominent role in India’s freedom. She said it was an honor standing at King Historic Park to celebrate Mahatma Gandhi and his principles of nonviolence and peace. She said that these two men—Gandhi and MLK—moved mountains through peaceful disobedience. She stressed the need to follow Gandhian example to overcome the challenges we face today. Rep. Angelika expressed hope that leaders across the world would come together to eradicate violence. She said, “I am honored to stand before the statue of such a great Indian and a great human for continuing to celebrate his life and legacy in the U.S. and around the world.”

[Left] Dr. Swati Kulkarni leading the gathering in a Peace March to King Crypts to lay wreaths at the Crypts of Dr. Martin Luther King, Jr and his wife Coretta Scott King.​

Prof. Carolyn Boudreaux, candidate for US House of Representatives, Georgia 7th Congressional District, in a message said, “One of Gandhi’s biggest lessons is be the change we wish to see in the world. He inspired so many people including Georgia’s very own Dr. King to choose peace, love, and non-violence to change the world as we know today.”

Senator Sheikh Rahman, Georgia State Senator representing District 5, said, “The philosophy of Gandhi is peace. Peace is more important these days not only in this country, but all over the world. I live by the same philosophy and we need peace until the end of this world. We need to continue to follow the Gandhi philosophy to make this world a better place to live in.”

Later, at the Gandhi statue, Dr. Swati Kulkarni led the gathering in a peace march to the King Crypts and laid wreaths at the Crypts of Dr. King and his wife Mrs. Coretta Scott King.

Subash Razdan, Chairman, Gandhi Foundation USA, then recognized and thanked all dignitaries, community leaders, and supporters for gathering in reverence for the Mahatma. He gave a brief background of GFUSA’s service goals and its partnerships with Embassy of India, the Consulate General of India-Atlanta, the King Center, the US National Park Service, and numerous communities as well as their respective organizations. K.V. Thrivikraman, secretary of GFUSA, proposed a vote of thanks.