COVID-19  In-depth info for Indians in Atlanta/Georgia. Click here
Home > Magazine > Around Town > Ganesh Chaturthi as never before—from the Hindu Temple of Atlanta to a lake 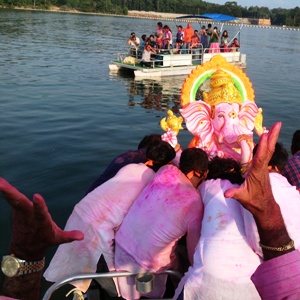 The Hindu Temple of Atlanta organized a spectacular, spiritual, Ganesh Chaturthi celebration on September 8, 2013. The newly installed majestic Ganapathi idol, specially made in Hyderabad for the Hindu Temple, had been air lifted to New York and trucked to Atlanta right in time. Temple priests and volunteers had wasted no time in decorating the idol for the upcoming festival.

So on a bright, crisp Sunday morning many devotees, guests, and visitors thronged to the nine-day celebration which began with 40 shanku sthapana (conch shells) and puja at the Balaji Temple, followed with mandala sthapana at the Siva Temple.

Widely worshipped as the god of wisdom, prosperity, and good fortune and traditionally invoked at the beginning of any new venture or challenge, Ganesha is known as vighnahartaa (remover of obstacles).

The dazzling idol of Lord Ganesh, resplendent in rich adornments, artistic décor, and lavish garlands was a perfect setting for yagnam (maha ganapathi homam) and maha ganapathi abhishek conducted in the yaaga shala between Balaji and Siva Temples. The elaborate rituals were performed by Chief Priest Srinivas Sharmaji together with associate priests of the Temple, who sat around the homa kunda with a blend of fruits, flowers, and puja accessories, and conducted homam chanting Vedic shlokas and apt Ganesha mantras. Devotees joined in chanting vakra-tunndda maha-kaaya surya-kotti samaprabha; nirvighnam kuru me deva sarva-kaaryessu sarvadaa (O Lord Ganesha, of curved trunk, large body, and with the brilliance of a million suns, please make all my works free of obstacles, always). 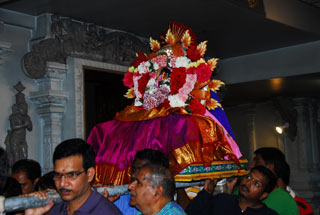 Deities in the Balaji and Siva Temples also wore a dazzling look in their ornate fineries and colorful garlands. The priests cheerfully performed archanas throughout the day blessing all devotees who came to offer prayers. In the Balaji Temple 40 shanku sthapana (conch shells) puja was done and the conches were attractively displayed for viewing and prayers. Ganesh Chaturthi was also celebrated by children inside the Temple and many devotees observed Ganesh Vratha. In the evening, during prakara utsavam, Ganesh murti was carried by devotees in a procession around the Temple to accompaniment of drums, musical instruments, chanting, and singing by supporters. This was followed with arathi and theerdha prasadam.

The Temple gave a rousing welcome to Sri Swamini Svatmavidyanandaji, a disciple of Pujya Swami Dayananda Saraswati and Acharya of Arsha Vijnana Gurukulam (AVG), which is active in GA, OR, and MD. She travels regularly and is active in interfaith and peace efforts. Swaminiji spoke with humor and anecdotes about Karma Yoga, saying that pursuit of happiness is fine but it should not be sought in material acquisitiveness and outside pleasures. “True happiness lies within. Yogify your entire life and search within with steadfast resolve, unwavering faith, and sincerity,” she implored.

What is a Festival without tasty food! The varied menu of South Indian vegetarian splendors like spicy idli sambhar, masala dosas, tamarind or curd rice, upama, boondi ladoos, prepared under the supervision of Food Committee Chairperson Seshu Sarma and served by dedicated volunteers, was relished by all. 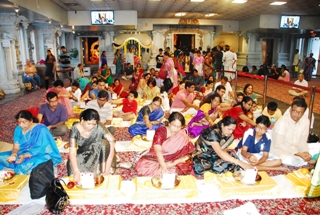 HTA President Narender Reddy commented, “This year HTA has decided to celebrate Ganesha Chathurthi in a way that was never done before.” Ganesh Chaturthi festival is one of the most popular Indian festivals. More than 3000 devotees came to celebrate as it is done in cities like Mumbai and Hyderabad. The 6.5 feet tall Ganesha looked down adoringly, and parents were happy that their children could experience the joy that they themselves experienced as children. A special Ganesha puja was performed by children and a prakara utsvam in the evening was fun. For the first time HTA was celebrating Ganesha Chathurthi as a 9-day event, concluding with visarjana (idol’s submersion into running water) at Lake Jackson on Sep. 15. Reddy thanked the many dedicated volunteers, including Subbiah Emani, Jaganmohan Rao, and Ravi Chander.

On Sunday, September 15, 2013, the nine-day Ganesh Chaturthi ceremony concluded with the large, newly installed Ganapathi idol, specially made in Hyderabad for the Hindu Temple, being immersed (nimajjanam) in a lake.

In the morning, Chinmaya Mission, Atlanta Balavihar children together with their parents performed Ganesha Puja with Mrs.Geetha Raghu, the priest, and Balavihar volunteers.

At noon, the elaborate Harathi was performed by Chief Priest Srinivas Sarmaji together with associate priests of the Temple to the chanting of Om Gan Ganpate Namo Namah by the devotees.

Next, the 66 lb. ladoo made specially by the Temple’s culinary expert Sri Ramakrishna, as mahaprasad for Lord Ganesha was offered for auction. HTA President Narender Reddy conducted an amusing and high spirited auction. After several bids, the ladoo was finally sold to the highest bidder for $8,000—a pleasant surprise to all. The bidder, who wishes to remain anonymous, then offered the ladoo as prasadam to the attendees.

While prasadam was being relished, preparations were being made for the Ganesh nimajjanam ceremony. As Temple volunteers gently carried the Ganesh idol to the waiting pickup truck, many devotees wearing red headbands and carrying Om pennants sprinkled flower petals and colored powder on each other, danced, and chanted Ganapati Bappa Moriya to the accompaniment of loudly beating drums. The Ganesh idol was securely placed on the pickup truck and a gorgeous umbrella placed over his head. All the attendees joined in fun-filled Ganeshji’s prakara utsavam ceremony on the Temple grounds with enthusiasm and gaiety. 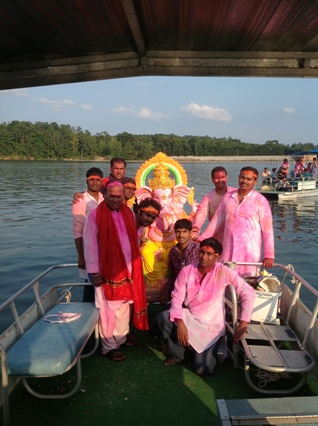 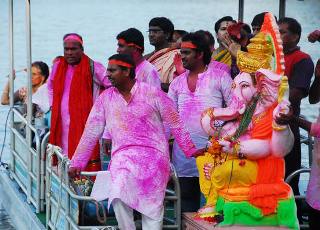 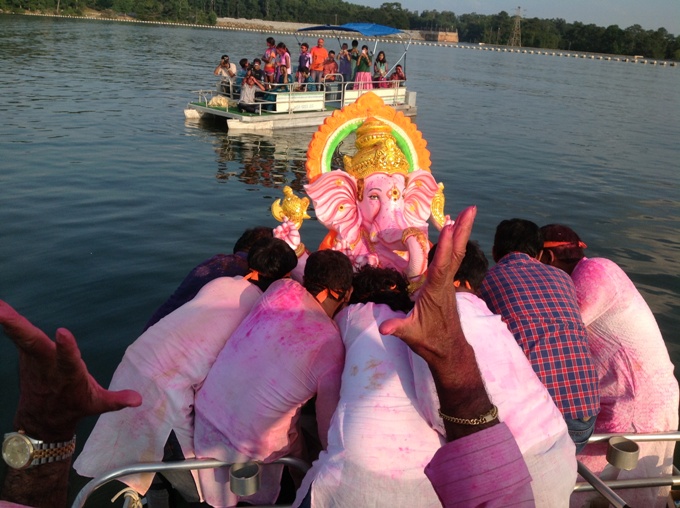 It was time to bid final farewell to much-loved Ganeshji. A motorcade of about 40 cars with police escort left for Lake Jackson. At the lake, Ganeshji was carried on a boat ride to the middle of the lake and as over 200 devotees watched from the decks and a second boat nearby, Ganeshji’s nimajjanam ceremony was performed with great fanfare and to the joyous shouts of Ganapati Bappa Moriya and wishes for His return the following year. As they say, “with the immersion ceremony, the Form (physical) returned to the Formless (spiritual). Ganapati idol became one with the lake water.

Those who did not attend the nimajjanam ceremony at Lake Jackson had a treat: a spectacular dance performance by visually impaired artists from Deepa Academy for the Differently Abled, Bangalore, India. HTA Chairperson of Community Services, Dr.Sujatha Reddy, appealed to the packed auditorium to support the Academy with donations.

Special thanks went to Jaganmohan Rao who coordinated the nimajjanam arrangments, Ravi Chander and team, priests, Raju Vanapalli, Bharadwaj, and Mike Mallone, who were extremely helpful in taking Sri Ganesha for nimajjanam.

As the elated HTA president, Narender Reddy said, "These celebrations will remain unforgettable for HTA.”