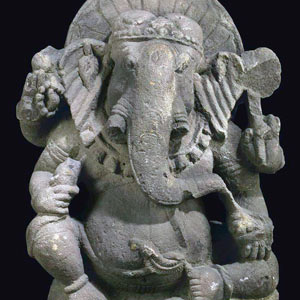 Now on view at the Carlos Museum of Emory University are two recently acquired and significant objects of art from India.

The first is a delightful stone carving of Ganesha, made in Maharashtra in the 9th century. Seated with his legs in a child-like pose, on a lotus throne, with lotus leaves behind his head, his four hands hold a mala for meditation, an axe for removing obstacles, his tusk that he broke off to give sage Vyasa for writing the epic Mahabharata, and a bowl of laddu!

On April 18, Dr. Joyce Flueckiger, professor of religion at Emory, introduced Ganesha in a lecture titled “Removing All Obstacles: The Worship of Ganesha in India.” She described ways in which Ganesha’s annual festival is celebrated in urban Hyderabad, from a small home celebration to a large city festival, and the immersion of the statues at festival’s end, and contrasted these with celebrations in rural Chhattisgarh. Various images of Ganesha were also shown, as depicted by modern artists.

Dr. Flueckiger had been encouraging the museum to acquire a depiction of the “Lord of Auspicious Beginnings,” since he is so well-loved by Indians everywhere, worshipped and prayed to by those beginning a journey or a new undertaking, and, good to know at Emory, by students before taking final exams! Her short video clip may be seen at http://carlos.emory.edu/content/figure-ganesh. 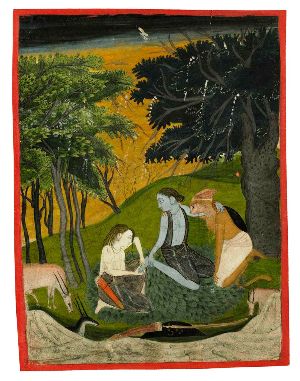 The second new item is an eighteenth-century miniature painting, illustrating an episode from the Ramayana, one of the two great epics from India. In a natural setting of green, gold, and grey, the central blue figure of Rama rests an arm on Hanuman’s shoulder as his brother Lakshmana removes a thorn from Rama’s foot; the scene emanates calm, peace, and compassion. A short video may be seen at http://www.carlos.emory.edu/content/illustration-ramayana.

The director of the Carlos Museum, Bonnie Speed, says that “The Museum hopes to build a significant collection of Indian miniature paintings, specifically of scenes from the Ramayana, as a resource for Emory University’s departments of Religion, Middle Eastern Studies, and South Asian Studies.” 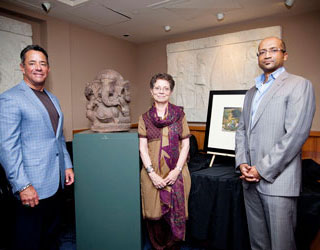 Chris Carlos, Joyce Flueckiger, and Jay Patel at a Carlos Museum event celebrating the arrival of the Ganesha statue and the miniature painting depicting a scene from the Ramayana. (Photo: Emory University)

The Ganesha is a gift of Merry and Chris M. Carlos and Joanne and Charles Ackerman, and the painting is a gift of Jayantilal K. and Geeta J. Patel and family.