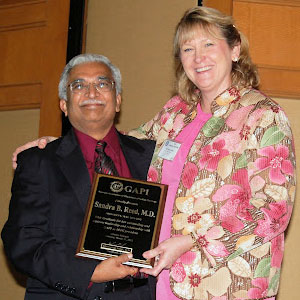 The Georgia Association of Physicians of Indian Heritage (GAPI) held its annual meeting/banquet at the Crowne Plaza Atlanta Perimeter at Ravinia, on Saturday, March 31. The gala event was attended by over 230 members from the medical field.

In CME Session, moderated by Ms. Betty Scrutchin, and presented by MAG Mutual, an interesting topic was Surviving a Malpractice Lawsuit with Dr. Ann Contrucci, a pediatrician and Mr. Bob Monyak, defense attorney. Dr.Cotrucci discussed what she went through during a malpractice suit ($23 million). Mr. Monyak declared that the only thing that mattered was the good standard of care given and not the consequences, which is what helped win the case. As physicians are under tremendous pressure due to fear of malpractice lawsuits, this presentation helped everyone understand the process. 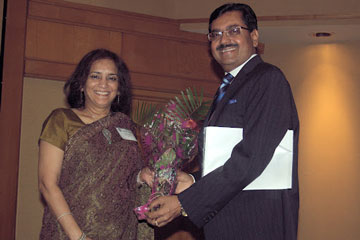 Dr. Daksha Patel presents a Bouquet to Hon.Ajit Kumar. After Consul General Kumar's remarks, emcee Pulak Patel introduced MAG President Dr. Sandra Reed, who is the second female Physician to lead MAG as president. She briefed the audience about MAG’s legislative efforts to protect physician’s interest in Georgia: on a pharmacy bill to give vaccinations in pharmacies without written prescription from physicians; and on "autonomy for physicians which would not tie your Board Certification or your medical licensure for taking any particular part of medical payment."

AAPI President Dr. Sunita Kanumuri emphasized working together, including in the recent 5th Indo-US HealthCare Summit in Hyderabad, India. She mentioned the upcoming convention on June 27 in Long Beach, California. AAPI President-Elect Dr. Narendra Kumar said that afterwards, mini-conventions will be held over three weekends around the country. GAPI and the city of Atlanta have been chosen for one such convention at the end of September this year, where India’s top female singer Shreya Ghoshal will perform at GAPI’s Silver Jubilee Celebrations and help AAPI Charitable Foundation to raise funds for the GAPI free clinic—maybe even a building for the clinic! Next year’s Indo-US Healthcare Summit will be in Cochin, Kerala. 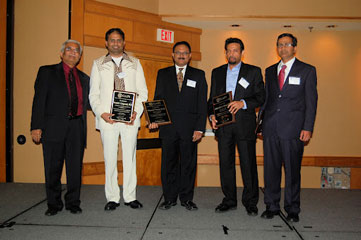 Dr. Patel mentioned GAPI's support of Ekal Vidyalaya. He announced that he and a few other GAPI members had formed a 251 Donation Club, where one donates $251 per year for five years to support Daksha Chudgar Lydia House in Augusta, a new residence for women undergoing cancer treatment.

In addition to the health fairs in Columbus and Sai Health Fairs, GAPI also participates in BAPS Health Fairs, for which Dr. Mahendra Shah is contact person.

Humanitarian Awards were given to Ralph Parker and Swadesh Katoch (Sewa International,USA), who have played an exemplary role in helping 3,600 Bhutanese refugees in Atlanta settle down and enabling them to lead a better life. They both said they would use the money to help the refugees.

After a delectable dinner members were treated to Bollywood chart-toppers by Dr. Amit Chakrabarty and Aparajita of Geetanjali Music Group, which immediately got the audience on the dance floor!

Further details on the work of Swadesh Katoch and his award:
"HSS Worker Swadesh Katoch gets Humanitarian Award for Bhutanese Hindu refugee resettlement in US."