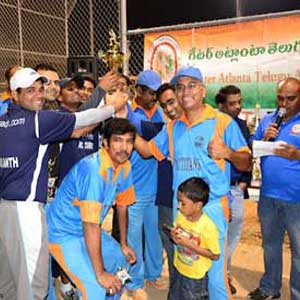 Winners celebrate, joined by a youngster.

The Greater Atlanta Telugu Association (GATA) organized its second annual day/night cricket tournament, held on September 21st, 22nd, 29th, 30th and the finals on October 5th. The event raised funds for the National Institute of Mental Health and Neuroscience (NIMHANS), in Bangalore, which performs pioneering research on autism. One in 110 children in the US are diagnosed with autism. In India there has been a staggering six-fold rise in the number of autism cases. GATA is determined to promote the awareness of autism and how it affects families.

GATA’s Autism Cricket Tournament was sponsored by RapidIT, Inc. whose CEO Goutham Goli, a great philanthropist and avid cricket player, fielded two teams through his business sponsorship and contributed his time during the tournament. This year’s new attraction is a beautiful rolling trophy, commissioned by GATA, for the winners of the tournament.

Kick-off was at Brindavan Indian Cuisine on September 20th. Thirty enthusiastic teams registered, and schedules were finalized amidst fanfare. The matches took place at E.E. Robinson Park in Sugar Hill, Georgia. The splendor of the park was suggestive of Premadasa Stadium in Colombo, Sri Lanka, which hosted the T20 World Cup finals. Commentary was done by Sunil Kuturu and Gireesh Meka, both of whom reminded us of professionals like Sunil Gavaskar and Harsha Bhogle. Videos taken during early matches were telecast on TV5. Players’ spouses provided much moral support, encouraging them to play great cricket. Entertainment included great music, amusement, and snacks. An overwhelming crowd was at hand to watch the over 300 participants of the tournament.

Finals were held on October 5th with live coverage on Yupp TV. With the conclusion of the tournament, GATA became the first nonprofit organization in the United States to provide a live telecast so that parents of the finalists could watch in India.

Concentration at the coin toss.

Dr. Satyanarayana Reddy conducted the toss for the final match between Corpteq Indians and ACC Titans, whose captains were Sujith and Arvind, respectively. The ACC Titans won the toss and elected to field. Titan’s bowlers did a great job by taking key wickets of Chaitanya and Uday in the first two overs. Swamy and Abhi took the stance, and the partnership hit more than 50 runs. Abhi scored a wonderful 47 with two 6’s and three 4’s. The Corpteq Indians scored a total of 72 runs aside from their commendable bowling and fielding. Titans started off well for first two overs and then the batting order slowed. Spectators had great hopes on Arvind to put the Titans back into the game. A great ball by Sudheer and spectacular catch by Swamy (keeper) put the Titans in trouble. After a great match play, Corpteq Indians won by a wide margin. Congratulations to Corpteq Indians on a well-played tournament! 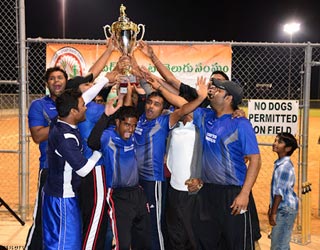 A winning team rejoices as a smiling boy looks on.

Tension and excitement was in the air as the Titans performed very well in all their previous rounds. However, the young Corpteq Indians’ bowlers bowled very well and kept getting crucial Titans’ wickets. In quick succession the key batsmen were back to pavilion, the match result was out, and the crowd of over 300 hundred was elated to see the young Corpteq team win the championship. For the ACC Titans, who are a mix of young and experienced, it simply was not their night. Cricket lovers who wit-nessed the game on Yupp TV all over the world and at the grounds were delighted with the camaraderie of the game during this GATA 2012 Second Annual Autism Cricket Championship. 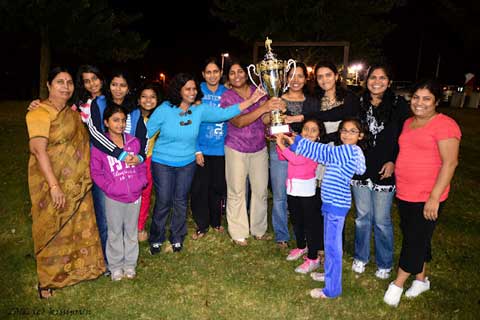 Wives and kids join in the proud moment.

The event was adjourned by singing the Indian national anthem “Jana Gana Mana.”