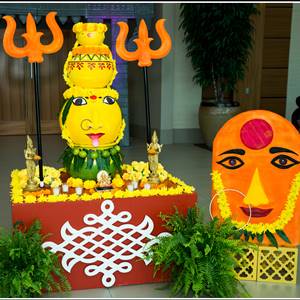 GATeS Board Chairman Anil Boddireddy and President Thirumal Reddy Pitta with their teams led this extraordinary celebration with performances depicting the rich cultural heritage of Telangana. This year’s theme showcased traditional dances from the Telangana region that are fast disappearing. To support and create new interest in these ancient art forms, the program featured a mix of local artistes and professional dancers from India.

The evening began on a traditional note, with the lighting of a lamp by GATeS Board Members. A cultural extravaganza followed, including a variety of dances, vocal, and fusion music performances, with Burrakatha, a traditional form of storytelling, being used to narrate each performance. Natya Roopakam, a dance drama presented by Shiv Institute of Dance Academy showed the valor and sacrifice made by people during India’s independence struggle; it received a lot of applause from the audience. 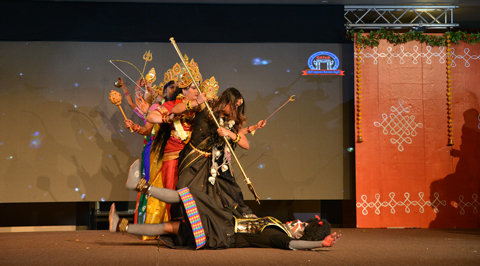 The event successfully brought together both Telugu regional and national community leaders, all of whom pledged their support in the service of the Telugu community in the U.S. GATeS recognized the efforts of several community leaders and felicitated them.

The closing ceremony featured a brilliant performance by the band Dappu that kept the audience spellbound. The evening concluded with a video address by Erraballi Dayakar Rao, Minister (Panchayati Raj) of Telangana State.

(GATeS was founded in 2006 and nurtured by the well-known community leader, the late G. S. Reddy. Today, GATeS is a 1000-strong group, dedicated to fostering the community spirit among Telengana families in Atlanta and promoting Telengana’s rich culture.)

More highlights of the event: a Gananayaka dance by the students of Pushyami Lanka, followed by Telangana songs by Srikanth Lanka from Dallas, Texas; EDM Alarippu Fusion presented Indian Raaga (Rani Gopireddy). The anchor (Kathakudu) was Mimicry Ramesh and was supported by Niranjan Podduturi and Srini Shanagarapu; Rani Rudramadevi, a dance drama narrating the story of the monarch of the Kakatiya dynasty in the Deccan Plateau with capital at Warangal and Perini Thandavam, a dance performed by males (it is believed that in ancient times this was performed before the soldiers set off to war) were presented by Neelima Gaddamanugu, Natarajan Natyanjali Kuchipudi Academy; Gussadi and Lambadi dance, bathukamma, and tribal dances from the Telangana region were presented by artists trained by Harini, Hema Shilpam and Shruti; also showcased were Telangana festivals of Bonalu dance presented by Neelima Gaddamanugu, Natarajan Natyanjali Kuchipudi Academy.

Telangana Formation Day is celebrated back in India on the formation of Telangana State on 2nd June every year since 2014. Telangana is the 29th state in India. It is the twelfth largest state and the twelfth-most populated state in India with a geographical area of 112,077 km2 (43,273 sq. mi) and 35,193,978 residents as per 2011 census. On 2 June 2014, Telangana was separated from combined state of Andhra Pradesh as the newly formed 29th state with Hyderabad as its capital.