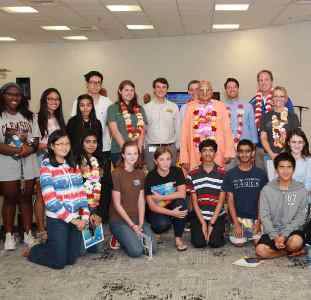 (Left) Some of the high school seniors and teachers who attended Shrila Maharaj's workshop at Chattahoochee High.

On September 24, 2016, GVA conducted the Ratha Yatra by participating in the Duluth Fall Festival parade in Duluth, Georgia. With GVA’s Founder Acharya, His Divine Grace Shrila Bhakti Swarup Tirtha Goswami Maharaj, the devotees carried Their Lordships Shri Jagannath, Shri Baladeva, and Shrimati Subhadra Devi in a well decorated rath (chariot) on the streets of the city of Duluth. Lord Jagannath bestows His causeless mercy to all by coming outside the temple and being carried in a rath on a yatra (journey). 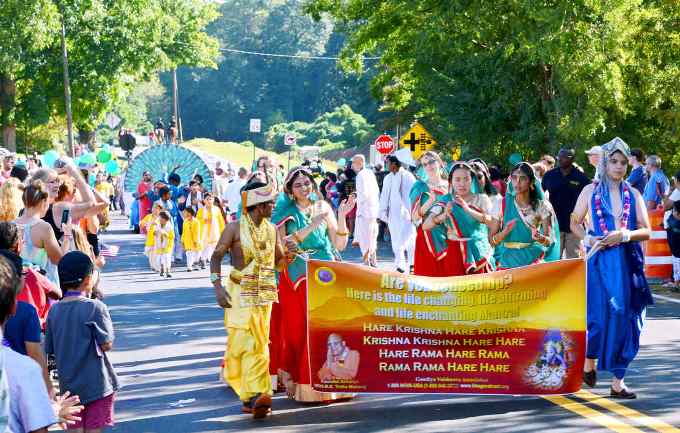 His Divine Grace Shrila Maharaj, seated in a beautifully decorated peacock float, waved to the parade onlookers and gave his blessings. The Harinam Sankirtan (chanting of the holy names of Shri Krishna) with karatalas (hand cymbals) and mrudangas (double-sided drums) performed by GVA in the 2-hour parade was ecstatic and attracted the young and the young at heart, and everyone danced jubilantly. Devotees carried the Hare Krishna Maha Mantra banners, while young boys in traditional blue and yellow kurtas, girls in red and pink gagras, and seniors from Chattahoochee High School in colorful Indian dress danced to the Hare Krishna Maha Mantra throughout the parade route. 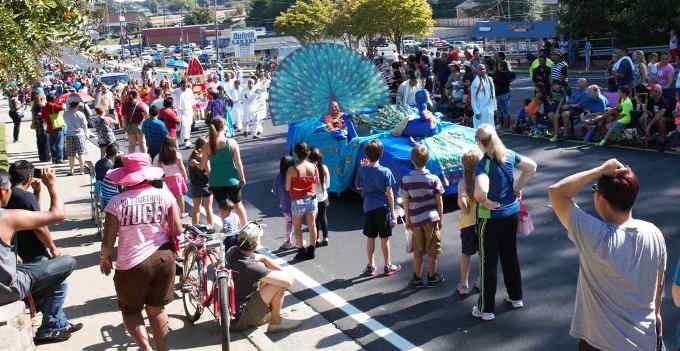 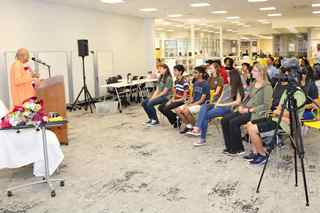 On October 6, Shrila Maharaj was invited to Chattahoochee High School in Johns Creek, to conduct a workshop on the science of the soul, God consciousness, and the basis of spiritual life. Shrila Maharaj was received with honor by the School Principal with the school marching band playing. The workshop was well attended by seniors who were inquisitive to know more about the culture and teachings of the vedas. Students participated in a question/answer session.

Shrila Maharaj sang the prayers of the Personified Vedas, spoke about how Lord Shiva was saved from Vrkasura, and all about Lord Shri Krishna's glories from the 10th canto of Shrimad Bhagavatam. Shrila Maharaj also spoke in great detail about the ​curse upon the Yadu dynasty, ​meeting of Maharaja Nimi with the nine yogendras, and ​liberation from the illusory energy from the 11th canto.

Humanity as a whole is struggling to find answers to the problems that we face: global warming, famine, poverty, war, floods, tsunamis, to name a few. Proposed solutions fail, one after another. The answers can be found in the ageless Vedas, says His Divine Grace Shrila Maharaj, the author of various books on the philosophy of Krishna consciousness. His discourses on a range of spiritual topics are simple and succinct.