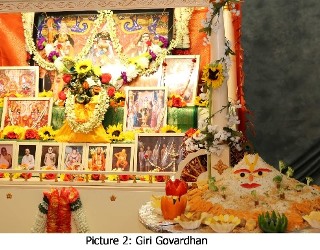 Part 1:- King Rshabadeva's Teachings (Alpharetta)
Shrila Maharaj described the appearance of Lord Rshabadeva, who is an incarnation of Lord Vishnu, His characteristics, teachings, and activities. In this portion Bhāgavata-Dharma, religious principles in devotional service that transcend principles for liberation and the mitigation of material misery, are elaborately explained and practically demonstrated by Lord Rshabadeva. While instructing his one hundred sons, Lord Rshabadeva said,

"My dear boys, of all the living entities who have accepted material bodies in this world, one who has been awarded this human form should not work hard day and night simply for sense gratification, which is available even for dogs and hogs that eat stool. One should engage in penance and austerity to attain the divine position of devotional service. By such activity, one’s heart is purified, and when one attains this position, he attains eternal, blissful life, which is transcendental to material happiness and which continues forever."

The human life is especially meant for the revival of our relationship with the Supreme Lord, and to this end, all kinds of austerities and penances should be accepted. By austere activities, one’s heart can be cleansed of material contamination, and as a result one can be situated on the spiritual platform. To attain this perfection, one has to take shelter of a pure devotee and serve him. Then the door of liberation will be open.

Part 2: Maharaja Bharata's Activities (Cumming)
In this portion, the activities of King Bharata Mahārāja, the emperor of the whole world, were described in detail. Bharata Mahārāja performed various ritualistic ceremonies (Vedic yajñas) and satisfied the Supreme Lord by his different modes of worship. Being ordered by his father, Lord Ṛṣabhadeva, Bharata Mahārāja married Pañcajanī, the daughter of Viśvarūpa. After this, he ruled the whole world peacefully. Formerly this planet was known as Ajanābha, and after the reign of Bharata Mahārāja it became known as Bhārata-varṣa. Bharata Mahārāja was very rigid in executing religious principles and following in the footsteps of his father. He therefore ruled the citizens very affectionately. Because he performed various yajñas to satisfy the Supreme Lord, he was personally very satisfied. Being of undisturbed mind, he increased his devotional activities unto Lord Vāsudeva.

Part 3: Jada Bharata's instructions to King Rahugana (Johns Creek)
In this section Bharata Mahārāja, now born as Jaḍa Bharata, tells the King Rahūgaṇa, ruler of the states known as Sindhu and Sauvīra, “You are not very experienced, yet you pose yourself as a learned person because you are very proud of your knowledge. Actually a person who is on the transcendental platform does not care for social behavior that sacrifices spiritual advancement. Social behavior comes within the jurisdiction of karmakāṇḍa, material benefit. No one can spiritually advance by such activities. The conditioned soul is always overpowered by the modes of material nature, and consequently he is simply concerned with material benefits and auspicious and inauspicious material things. In other words, the mind, which is the leader of the senses, is absorbed in material activities life after life. Thus a person continuously gets different types of bodies and suffers miserable material conditions.Forgetting that he is an eternal servant of Kṛṣṇa and that service to Kṛṣṇa is his only business, one is doomed by material nature to serve the objects of the senses."

Deepavali and Govardhana Puja celebrations:
On November 11, devotees from the congregation celebrated Deepavali with grandeur. Lighted diyas decorated the outdoors, and Shrila Maharaj held a group kirtana session that enthralled the devotees and guests. Later, fireworks were displayed and everyone enjoyed the show and had a sumptuous prasadam. The next day was Govardhana puja, the day when Lord Krishna, as a seven year old boy, lifted the Govardhana hill on His little finger and protected the citizens of Vrindhavana from the wrath of Lord Indra. More than 35 varieties of food items were offered to the beautifully decorated Giri Govardhan. The leela was enacted as a play by the children from the congregation, with rich costumes. An elaborate arati was performed by Shrila Maharaj to Shri Shri Radha Madanamohana and to Giri Govardhan. Everyone had the opportunity to do parikrama of the deities and Giri Govardhan with ecstatic bhajans.

Krishna, the Irresistible - Book Release:
Shrila Maharaj released his new book Krishna, the Irresistible, a three-part book that starts off with why Lord Krishna is the Supreme, His pastimes, His mystic forms, His qualities, the different rasas, and everything about Lord Kirshna. The second part is about Lord Krishna instructing the Bhagavatam to Lord Brahma in just four verses, while the third part is about the complete conception of Godhead, a detailed explanation about the ten tenets given by Shrila Bhaktivinoda Thakura and its significance in the modern era. An A to Z book on Lord Shri Krishna with wonderful pictures, the book is a must read for everyone.

GVA regularly conducts home programs including Shri Bhagavat Gita reading and Hari nama sankirtana in and around the Atlanta area in addition to the weekly satsang conducted in Alpharetta. Chanting of the Lord's holy name is the only way for deliverance in this Kali yuga and reading the Bhagavad Gita brings about peace to the mind, soul, and body. Interested families are welcome to contact GVA at 1-888-9GVA-USA.