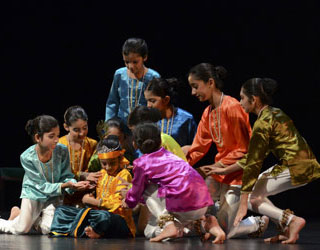 The annual recital by Geet-Rung School of Dance and Music enthralled the audience at the Gwinnett Performing Arts Center on the evening of May 12th. This year’s event featured performances by vocal ensembles, instrumental ensembles, dazzling Bollywood dances, and a Kathak dance-drama called “Krishna.”

Geet-Rung took over Tarang School of Music last year, and this year Director of the school Divya Srivastava presented a recital lasting over 3 hours.

The evening opened with “Krishna.” The dance drama began with Yashoda (played by Divya) swinging baby Krishna in the palna, then playful Krishna playing the flute, naughty Krishna stealing makhan, and frolicking and romantic Krishna hiding the belongings of Radha (also danced by Divya) and other gopis and breaking their water pots. The forty-minute play was brought to life by some forty-two students of Kathak, ranging in age from 8 years to 35 years. It took six months of preparation, including collecting music composed by artists in India. “What was important was guiding the students with right expressions and timing of the play,” said Divya. The play ended with the video, “Making of ‘Krishna.’”

The next section of the program was for the vocal students. The Hindustani vocal group led by Debasri Dutta and Carnatic vocal led by Prasuna Vempaty presented their classical pieces full of melody enough to intrigue those in the audience who did not understand the language, but just the universal language of music! The vocals were accompanied by Zen Bakshi on tabla.

Next was a presentation with drums, guitar, and orchestra by the instrumental students. Geet Bhargava and his teacher Jon Batt presented a brass duet. The final piece with several instruments was directed by Pankaj Bhargave, Executive and Music Director of the school.

Finally the dance performances set the stage ablaze. Most of the dances revolved around the theme-word rung (color) associated with Geet-Rung. The youngest students amazed the audience with their stage presence and performance. Highly praised was “Chilman uthegi nahin” in off-white and purple Kathak costume in Mughal style.

An exciting techno dance “lattoo lattoo” was performed by teenage groups in dazzling gold costumes. The unusual finale was a vivid presentation of parody of songs from the old era accompanied by the special appearances of characters/actors of that era.

Students who earned the highest score in their Kathak exams were awarded medals by Divya. She also honored the school’s teachers with trophies and acknowledged the school’s manager Mani Nyayapathi for all her support and service.

This event was unlike past recitals in that it raised funds for the nonprofit St. Jude Children’s Research Hospital. “We not only helped the children suffering from catastrophic diseases but helped our students learn the most precious value of life—humanity, how they can help make a difference in a child’s life,” said Divya. “They also learned through this the other values such as sincerity, responsibility, self-confidence, and teamwork.”

The evening was emceed by Anita Gupta. Photography, videography and backdrops were provided by Lavanya Palaparthy. Stage manager was Namrata Dewan. The show was covered by DJ Zee of Desi Web Show.