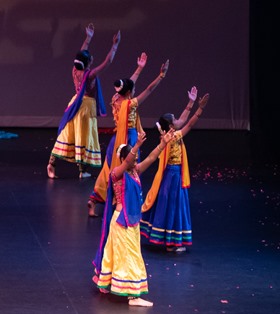 Geet-Rung School of Dance and Music presented their spectacular tenth annual dance concert “Taal” on May 12, 2019 at the Infinite Energy Theater.

Geet-Rung promotes the ancient Indian classical dance form, Kathak. It focuses on quality training, and believes in learning and sharing, so it encourages accomplished scholars to inspire the young, set an example of dedication, discipline, and commitment, and help them reach their goals.

Divya Srivastava, founder and director of Geet-Rung, put together technical aspects of Kathak, and she herself anchored the first half of the evening to make her audience understand the details of each performance, giving them insight into this classical dance form. Emcee Shelley Chinnan kept the audience informed and captivated. Divya Srivastava opened with a song on Krishna along with her senior students, which was then followed by different group of students at each level. Much applauded was the presentation on Jaipur Gharana and Lucknow Gharana with attention to details on hand movements and footwork, in bright costumes. The performance on taal Gaj Jhampa awed the audience with its maturity and perfection.

“Very well trained students and excellent choreography,” remarked a guest. Parents and audience were left spellbound by the solo performance of Divya, who presented the unique Gat bhaav (story telling and expressions) based on the episode of Sita haran from the epic Ramayana. “I have never seen anything like that before,” remarked one, and “How quickly and with ease her expressions changed from one character to another—from Sita to Lakshman to ten-headed monster Ravan,” said another. 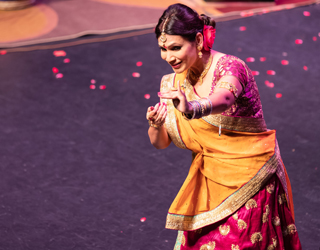 The first segment ended with a mix of songs on Raag Khamaj by singer Pankaj Bhargava, accompanied by Anjaneya Sastry on tabla and Gaurav Bhagat on guitar.

This was then followed by folk and Bollywood dances. Students of all ages, some as young as four, presented the most peppy and upbeat Bollywood numbers such as “Pallo latke,” “Swag se Swagat,” “Deewani Mastani,” and “Chaugada tara.”

The finale set the stage ablaze with colorful costumes, brilliant choreography, and fast paced moves in circles, influenced by the folk style dances on the mix of Gujarati folk-based Bollywood songs.

The highlight of the program was the graduating students, who accomplished their Kathak Visharad and received the Visharad degree. It was thrilling moment for Akshita Sharma, Rani Patel, Reva Sahu, and their families when these students received their degrees after the hard work over eleven years.

“To get the basic knowledge of this ancient dance form through audio, visuals, and performances in such a short time is totally incredible,” according to another parent.

“Taal” was a fundraiser for St. Jude Children’s Research Hospital, as in the past, which advances cure and prevention for pediatric catastrophic diseases through research and treatment. At St. Jude no child is denied treatment based on race, religion, or family's ability to pay. Top fundraisers were Aafreen Anjum, Milee Patel, and Aanya Gupta, who were given special recognition as “Angels” bringing light into the dark life of children battling cancer.

Geet-Rung also supports the nonprofit Ekal Vidyalaya which runs one-teacher schools in rural India for only $365 a year! Divya says, “I want all my students to understand the importance of community service and how they can use their talent to help others in need. This not only teaches them great values of life but also gives them self-confidence, motivation, as well as volunteering and leadership skills.”

Guest speaker Nazeera Dawood briefed the audience about her community forum Chai & Just Chat which encourages discussion on varied topics for the life and health of a person/family. Nazeera is CEO of Nazeera LLC and President of Vendorship Inc., which helps industries strategize to secure funding from the government sector. She also shared her passion for learning Kathak and the beginning of her new journey with Divya. Manoj Barot of Narayan Seva Sansthan USA also addressed the audience.