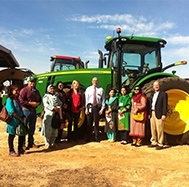 A group of women recently visited Georgia farms with GCIV, and will take their new knowledge back to Pakistan. (Photo courtesy GCIV)

The Georgia Council for International Visitors (GCIV) is an organization less well-known in Indian-American circles (with only c.20 South Asian members), but worth learning about. Not only does it have a vision “that every Georgia citizen has the opportunity to be more globally engaged,” but its success has been noteworthy. In 2001 its national network, the National Council for International Visitors, was nominated for the Nobel Peace Prize for its efforts to foster international understanding. GCIV is one of 90 community-based organizations in the USA that implement the US Department of State’s International Visitor Leadership Program (IVLP) for current and emerging foreign leaders, a program that US ambassadors rank as most effective among the many public diplomacy tools at their disposal. 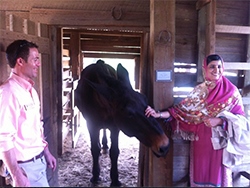 One of the women who recently visited Georgia farms with GCIV. (Photo courtesy GCIV)

GCIV in its last fiscal year hosted 698 overseas visitors from 139 countries in IVLP and other programs. From India came 21 visitors, Pakistan 29, Bangladesh 7, Sri Lanka 4, Nepal 9, and Afghanistan 14. For example, India’s visitors last February focused on combating gender-based violence and those in May looked at the US business environment. Pakistan’s October visitors were concerned with polio eradication. The most recent participants from Pakistan (Women in Agriculture: Developing the Next Generation of Leaders) visited farms in Tifton, Macon, and Fort Valley with GCIV to learn GPS tractor technology, irrigation, and dairy farming, before departing from Atlanta.

GCIV members can host visitors or meet delegations at dinners. Women’s programs last year introduced members to Sucheta Rawal’s Go Eat Give, Indian dances, and the Global Village Project. Students at over a dozen schools in Cobb, DeKalb, Fulton, and Fannin Counties and Atlanta Public Schools were able to meet over 100 international leaders. University students can become interns. And the public can attend lunch meetings with international leaders or attend Great Decisions Lectures.

The January 15, 2015 Great Decisions lecture was the first of this year’s Foreign Policy Lecture Series: “India Changes Course” by Dr. Salli Vargis, Professor of History and Honors Program Coordinator at Georgia Perimeter College. The presentation gave an overview of modern Indian history, with its issues of corruption, dynastic policies, and ineffective public services, but did not assay its topic of US engagement (after the recent Indian elections, “the U.S. has to determine how to best secure its interests as India asserts itself on the world stage.”)

Dr. Vargis did, however, provide interesting nuggets, most in response to questions from a very large informal audience, a mix of retirement aged to college students: The past boom in emerging markets identified the BRICs (Brazil, Russia, India, and China), but recent turmoil in the markets has changed the name to the Fragile Five (Brazil, India, Turkey, South Africa, and Indonesia). Modi was in the RSS from age 7, but his occupation as tea vendor was supplemental, not his main job. Israel has been an ally of both the US and India, but with the 3 countries being targets of Muslim terrorists, India is changing its stance towards Israel. Because terrorists have used cell phones, Indians now have to “jump through hoops” to get them. Because the Chinese government has subsidized industry, items like batteries are dirt cheap in India (1 rupee)—but this may collapse. “Reconversion” has been an issue in the past few months. Federal regulations do exist against trafficking, piracy, rape, corruption, etc., but policing is needed, which is difficult with India’s huge population. Modi has been courting NRIs. So far, little concrete action has been seen from Modi’s government, but he is talking about these issues more than previous Prime Ministers, so “give him a year,” said Dr. Vargis.