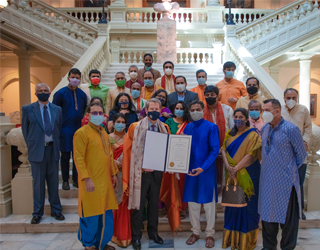 Based on lunar calendar, this year April 12 marked the beginning of Hindu New Year celebrated as Ugadi by Telugu language speaking community across the world. An important and historic festival, Ugadi is celebrated with great fanfare that includes gatherings within extended families and a sumptuous community feast.

The proclamation signed by Georgia Governor Kemp states “Telugu is one of the longest surviving classical languages and Telugu has rich literature. The Telugu community of Georgia is educating future generations in their language through various organizations and events; and April 12, 2021, marks the beginning of new year of Telugu people across the world following the lunar calendar. The Georgia Telugu- speaking community plays a pivotal role in keeping the Indian heritage and culture intact, as well as in enriching Georgia’s cultural diversity. The Georgia Telugu- speaking community has been contributing to the state in the fields of medical and engineering research, politics, legal, language, culture, and tradition, along with economic welfare. The Georgia Telugu community celebrates their rich culture and heritage throughout Telugu Language and Heritage Month with various literacy programs such as Telugu language reading, singing, writing, poetry, and speech competitions.”

The presentation of the Ugadi proclamation was held at the North stairs of Georgia Capitol in the afternoon in the presence of community leaders and representatives from various organizations of Telugu community.

Sharing in the joy was journalist Ravi Ponangi who, along with others, had come up with the idea of initiating a formal request to Georgia Governor to recognize April 12, 2021 as Telugu Language and Heritage Day. He said, “This proclamation is a memorable tribute to those literary luminaries like Pemmaraju Venugopala Rao, Veluri Venkateswara Rao, Dr. B.K. Mohan, Drs. Ravi and Seshu Sarma, Phani Dokka, Suresh Kolichala, Bala Indurti, Professor Joyce B. Flueckiger, Professor Velcheru Narayana Rao and many more who have contributed and laid the foundation for the furtherance of the Telugu language and culture in a foreign land particularly in Atlanta.”