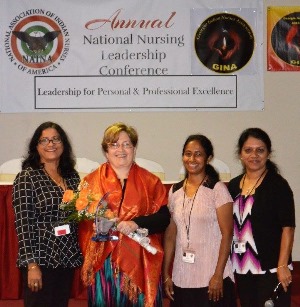 The Georgia Indian Nurses Association hosted National Association of Indian Nurses of America (NAINA)'s National Nursing Leadership Conference in the Impact Hall of the Ashiana Restaurant Norcross, Georgia, on Saturday, September 16, 2017. The theme of the conference was "Leadership for Professional and Personal Excellence."

The conference was kicked off by the two emcees, Jennie Mathen and Deepthy Varghese, with a prayer and warm welcome. The NAINA president, Dr. Jackie Michael, DNP, WHNP, gave the presidential address to the registrants. Dr. Indrakrishnan, a gastroenterologist from Gwinnett County and a member of the Georgia Board for Physician Work Force, was instrumental in securing the participation of Senator Renee Unterman and Consul D. V. Singh for this conference. Dr. Indrakrishnan in his speech appreciated the nurse’s immense contribution to the healthcare field.

The keynote speaker of the conference, Marilyn Margolis, who is the current CEO of Emory Johns Creek, did a superb presentation inspiring nurses to identify and unlock their leadership potential. She was presented with a ponnada, plaque, and flowers in appreciation of her time spent with the nurses. 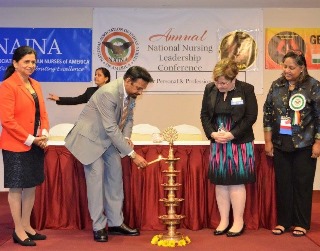 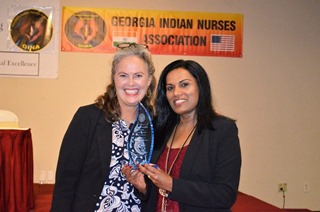 Lilly Anickat presents Dr. Rebecca Wheeler with a plaque for her presentation.

Nancy Dias, PhD, spoke and taught on transformational leadership using Kouzes and Posner's theories. Dr. Rebecca Wheeler, the current Coordinator of the Georgia Nursing Leadership Coalition, educated the nurses on how to serve effectively on organizational boards and motivated the nurses to find their passion and get on a board to propel the mission of various organizations. Before the lunch break, nurse practitioner Jennie Mathen presented on the content of leadership from bedside to the boardroom, developed by Agnes Therady, the current Chief Nursing Officer of Cook County hospitals in Chicago.

A delicious lunch was served by Ashiana Indian Cuisine and the conference promptly resumed at 1:00 pm. The afternoon session was kicked off by Dr. Letha Joseph, DNP, on leveraging technology for leadership excellence. She spoke about the various ways technology can be used to develop leaders and how to use it to excel as a leader. A lively hands-on workshop was conducted by Shaini Moonjeli, Mini Jacob, and Lilly Anickat, all of whom are Masters prepared nurses. The workshop allowed participants to decipher the difference between managers and leaders. 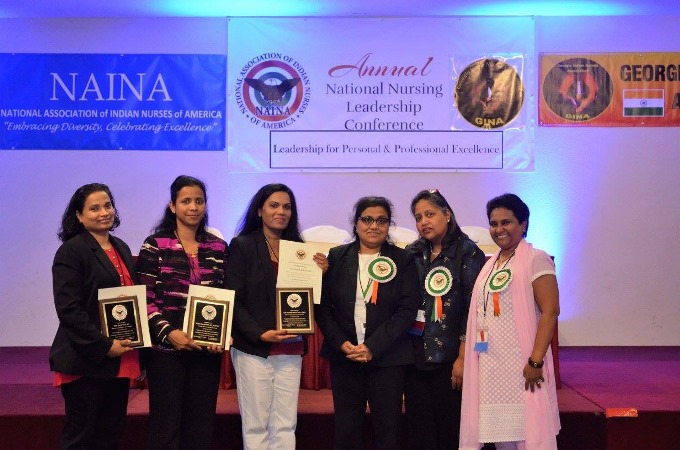 The final speaker of the ​conference was the NAINA president Dr. Jackie Michael who spoke about creating best practices and dynamic operating environments by addressing fiduciary responsibilities. There were a number of poster presentations done by nurses in NAINA. In her concluding remarks, GINA’s president Vidya Kanagaraj thanked all the attendees for coming to the Conference and making it a lively and productive gathering. She commended the GINA nurses for their support and enthusiasm and said the success of the Conference was based on their collective efforts.

The ​evening banquet was well represented. Senator Renee Unterman and Consul D. V. Singh were in attendance. Dr. Sujatha Reddy and Dr. Suprithi represented GAPI. Dr. Indrakrishnan introduced his good friend and the chief Guest, GA Senator (District 45) Renee Unterman, who is the current chair of the Senate Health & Human Services Committee. Renee Unterman graduated with an RN degree from Georgia State University and a degree in social work from the University of Georgia. She has been instrumental in passing many bills at the Georgia State Capitol which are benefiting seniors, children, and disadvantaged citizens of Georgia. Senator Unterman during her speech recalled how small Gwinnett County was when she moved in. She was the first woman to run for the city council of Loganville, GA. She not only won but later also became the Mayor and subsequently a senator for the past 15 years. She encouraged the nurses not to fear anything and come forward to take various leadership roles in the current fast changing healthcare laws and regulations.

The highlight of the evening was the ​cultural ​programme, emceed by Shirley Parayil. There were invidual performances by Suja Moonjeli and Jeslyn Regi, Kevin Jojo, and Austin Tharakan. Daniel George and Mr. Joseph Anickat enthralled the audience with their beautiful singing. The true show stopper was the piece titled “Incredible India – Journey from Kerala to Kashmir.” A power point presentation of the states was followed by their traditional dance forms. Tamil Nadu was represented by Akshita Gopikrishnan, Vibhedhini Ganesh, Shravya Prakash, Vrithiha Selvamuthukumaran, Meddha Sakthivel, Thariqa Gajendra, and Sarvesh Sakthivel. They danced to "Vazhga Nirantharam Vazhga," a Bharathiyar composition choreographed beautifully by Pavithra Prakash. Kerala was represented by a scintillating Mohiniyattam by Sridevi Ranjit of Laasya School of Dance. Next up was a ​vigorous bhangra dance representing Punjab by Anita Augusthy, Nicole Jacob, Robin Jacob, and Jasmine Anickat. Rajasthan was highlighted by the colorful folk dance Mai Nah Pehanu performed by Sheena Mathew, Jenimol Biju, and Cynthia Lukose. Snowcapped Kashmir was represented by Seema Gijo and Somlin Gijo a ​mother-​daughter duo who danced to the popular Bhumro bhumro syamrang bhumro song. All the dancers then gathered on the stage with Vani Manoharan depicting Mother India and sang the rousing song "Vande Mataram." There was pride and joy in all those gathered at the scintillating presentation from friends and family of GINA. The night ended with ​national ​anthems of America and India highlighting our shared traditions.