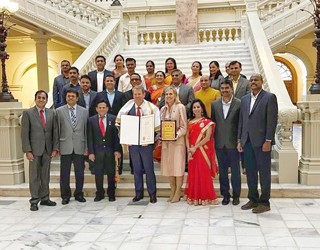 On October 14, 2021, Georgia state governor Brian Kemp signed a proclamation recognizing 1st November 2021 as Kannada Language and Rajyotsava Day in Georgia. The proclamation is the first of its kind in the U.S.A. for Kannada language. It was a proud moment for the whole Kannadiga community around the world.

On November 1, 1956, the different Kannada- speaking regions of southern India were brought together under a single state. That state, which was later renamed as Karnataka in 1973, marks its 65th anniversary this year. Rajyotsava day is celebrated with great joy and vigor all over the state of Karnataka. The entire state wears a festive look on this day as the red and yellow Kannada flags are hoisted at different strategic locations across the state and the Kannada anthem (“Jaya Bharatha Jananiya Tanujate”) is chanted.

[ Top] Governor Kemp with board members of NKK and Kannadiga community members as he proclaims November 1 as Kannada Language and Rajyotsava Day.

The proclamation signed by Georgia Governor Kemp states, “Kannada is one of the longest surviving classical languages, with a rich literature and etymological formations unique to its language and inscriptions dating back to 450 BCE.”

The office bearers of Nrupatunga Kannada Koota (NKK), a nonprofit organization established in 1973 in the state of Georgia, contributed in various ways during the Proclamation process. The idea was first coined by Sridhar Venkat during one of the discussions. The process was diligently nurtured and driven by the dedicated team of Dr. Anu Bhat, Board of Directors along with Santhosh Kumar, Srinivas Prasad and Dr. N S Prasad who collated all the facts and documentation. Sarpa Bhushan, Shylaja Prashanth and Diwakar Dyamanna were in-charge of communication. The documentation was reviewed and researched meticulously by the entire team which included Sudeep Hebbar, Vasanth Halemani, Bharath Tejasvi, Jayanth Palakshiah, Madhu Iyer, Aruna Gadekar and Vinay Venkatesh.

The proclamation ceremony, held on October 27th, 2021 at Northern Stairs at Georgia State Capitol in Atlanta, was graced by Governor Brian Kemp and his wife Marty Kemp. Some of the past presidents and chairmen from NKK also attended the event. Sharing in joy, Dr. Subrahmanya Bhat who has been a passionate sponsor of NKK said, “This proclamation is a memorable tribute to Vishwa Kannadigas (Kannada-speaking people around the world)” as he called for the furtherance of the Kannada language and culture.