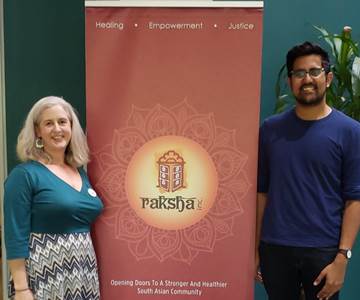 (Left) Two of the panelists: Amanda Planchard from Georgia Tech’s Office of Health Initiatives, and Rishi Raj, the filmmaker.

In recognition of Sexual Assault Awareness and Prevention Month, Raksha hosted a screening of the short film Second Chances, followed by a panel discussion at the Johns Creek Event Center on Sunday, April 14, 2019.

Second Chances was written and directed by Rishi Raj, a recent Georgia Tech graduate and past president of the film club, Buzz Studios. Second Chances has the honor of being accepted to the 2019 Cannes Film Festival and will be screened in France in May! Through his film, which is based on a true story, Rishi addressed topics such as consent and sexual assault. 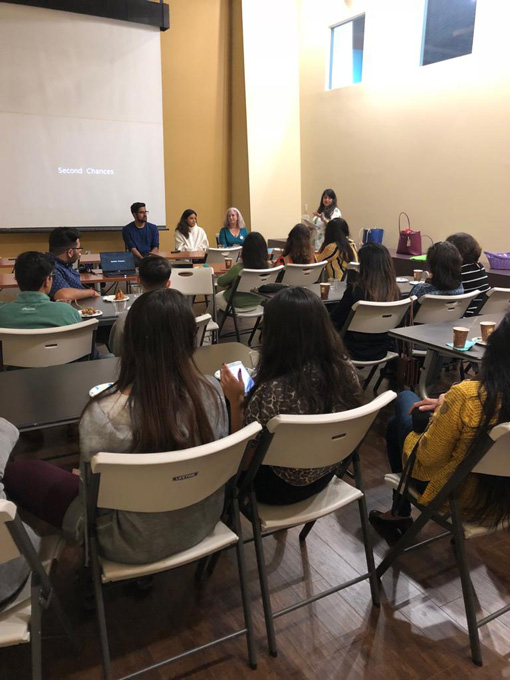 The panel discussion that followed the screening was moderated by Aparna Bhattacharyya, executive director of Raksha. Panelists were Rishi Raj, the filmmaker; Amanda Planchard, VOICE Advocate, from Georgia Tech's sexual and relationship violence prevention and response initiative based in the Office of Health Initiatives; and Aranya Gupta, a senior at Johns Creek High School and a writer/contributor to VOX ATL, an Atlanta teen magazine.

Rishi Raj described how his inspiration for the movie came from his attending a Take Back the Night event at Georgia Tech. Rishi enlisted his film club and worked with the VOICE Advocates to create this thought provoking film.

Aranya Gupta discussed the importance of addressing issues such as sexual assault and sexual assault prevention from an early age and stated that there were incidents of freshmen students being sexually assaulted.

Amanda Planchard shared how many of the students at Tech had experienced a sexual assault incident before they came to college. She also mentioned that sexual assault is more likely to occur by someone you know than by a stranger.

Different types of sexual assault and sexual coercion were described. In drug-facilitated rapes, the survivor might not have been drinking alcohol; sexual assault does not just coincide with drinking and parties.

The audience consisted of youth who have volunteered or spearheaded Raksha clubs in their own schools. They shared what they have seen, including bullying and the impact on students in the area. Engaging and meaningful discussions took place between the panelists, youth, and parents who attended.

Key messages that emerged from the candid conversations centered around the importance of early and open communication between parents and youth, and the importance of parents not judging their teens when they share things with them, since it can shut them down and keep them from sharing other things.

There was a discussion about rape culture and socialization in our communities that make it difficult for victims of rape to come forward and share their experiences. One doctor talked about how many desi women would come in to the emergency room at one of the hospitals she worked at that had a number of colleges in its vicinity. She stated they often had no support and had to carry their experience with no support system.

There was discussion about how to prepare students transitioning from high school to college who will likely face difficult situations but also awareness that parents need to start talking to their youth in middle school. Aparna also reminded the audience that boys are not only perpetrators, but we must also talk to the boys in the family because they also can be sexually assaulted.

Some statistics mentioned were surprising to the audience, such as that
-Ages 12-34 are the highest risk years for rape and sexual assault.
-Among undergraduate students, 23.1% of females and 5.4% of males experience rape or sexual assault through physical force, violence, or incapacitation.
-Only 20% of female student victims, age 18-24, report to law enforcement.
-Only 32% of nonstudent females the same age do make a report.
-About 4.2% of students have experienced stalking since entering college.

Amanda mentioned resources that are available to students at each of their colleges and asked students to seek out and be aware of resources.

Though cultural issues were mentioned, it was also recognized that sexual assault knows no boundaries and that everyone needs to be aware and vigilant. Open communication without judgement, and trust between parents and youth were recurring themes.

It was noted that Bollywood has shifted in addressing sexual assault. The afternoon ended with the courtroom scene from the Bollywood movie Pink shown as an example of how topics such as consent and sexual assault are being addressed in mainstream films in India as well.

The participants appreciated Raksha for providing a forum for sharing stories and the opportunity to converse openly about the topics of consent, honest communication with youth, and parents prioritizing having age-appropriate conversations with their kids throughout their childhood. This included how we may often inadvertently teach our children that their body is not their own when we force them to hug us or another person when they don't want to.

Such dialogues inspire change in the future for the youth in our communities.

Madras Chettinaad sponsored tea and samosas for attendees. And after the storms of the afternoon passed, the participants exited the venue greeted by a beautiful rainbow. 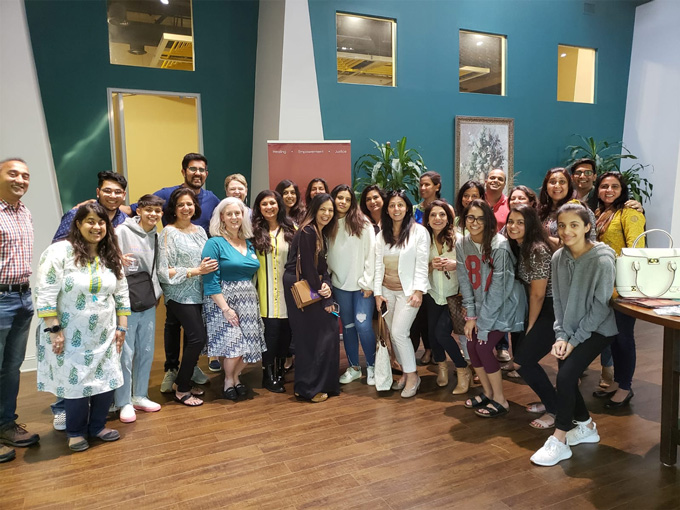 Raksha's executive director Aparna Bhattacharyya with panelists, volunteers, and some of the attendees.