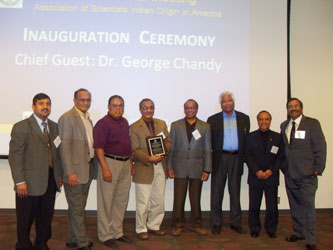 The Association of Scientists of Indian Origin in America (ASIOA) was established in 1981 to promote fellowship, to act as a scientific and educational society, to establish open channels of communication among hundreds of scientists, and to act as a fraternal organization and a charitable association.

ASIOA initiated biennial meetings to provide a forum for interactions of Indian scientists from different disciplines and to stimulate scientific discussions on a national scale. Since 2005, three meetings have been held in Texas. This year, ASIOA brought the Fourth National Meeting to Georgia, which was held under the leadership of Dr. Avadhesh C. Sharma, President of ASIOA, and hosted at the Philadelphia College of Osteopathic Medicine – School of Pharmacy in Suwanee, Georgia. Despite the week-long Atlanta winter storm, the meeting on January 15-17, 2011 had nearly 100% attendance. Over 50 academic professionals, scientists, and graduate students from across the United States congregated for scholarly pursuits.

Guest Inaugural Speaker for the meeting was Dr. George Chandy, Professor of Physiology & Biophysics at UC Irvine and the Director and founder of Airmid Incorporated. As an authority on the roles of potassium ion-channels in disease, Dr. Chandy delivered an informative presentation on “A Journey from Patient’s Bed to Bedside: Targeting Potassium Channels in T Cells as Therapy for Autoimmune Diseases.” Dr. Chandy provided data and updates on his new interventions that could be therapeutically useful for multiple sclerosis, rheumatoid arthritis, type-1 diabetes mellitus, psoriasis, autoimmune glomerulonephritis, and contact dermatitis.

ASIOA was also privileged to have Dr. Muthu Periasamy as the Oration Speaker. Dr. Periasamy is Professor and Chair of the Department of Physiology and Cell Biology at Ohio State University and is Associate Director of the Davis Heart & Lung Research Institute. Renowned in the field of cardiac physiology, Dr. Periasamy delivered an insightful presentation on “Sarcolipin: A Novel Target for Thermogenesis and Metabolism in Muscle.”

The scientific sessions were initiated by Dr. Sudhir Gupta, who presented on “Aging: A Model for Human Autoimmune Disease.” The fourth national meeting was comprised of a diverse selection of scientific sessions this year including: Cardiovascular Biology, Cancer Biology, Biomedical Research, Platelet Biology, GI Biology and Drug Development.

In addition to the senior researchers at the meeting, undergraduate, graduate, and postdoctoral students were able to present their research in the Junior Scientist Competition. Candidates presented their respective talks and posters in front of a panel of referees and were judged on the basis of scientific rigor, presentation style, and question/answer round. Dr. John Fleischmann, Campus Executive Officer of Philadelphia College of Osteopathic Medicine – Georgia Campus and Chief Guest for the meeting, and Dr. Avadhesh Sharma, presented the awards to the Junior Scientist Competition winners listed below, and congratulated them for their exceptional presentations.