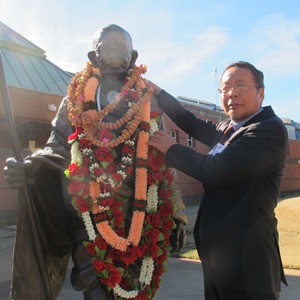 The Gandhi Foundation of USA (GF-USA) joined throngs of people in downtown Atlanta and celebrated Dr. Martin Luther King, Jr’s 90th birthday at the magnificent six-foot-four-inch bronze statue of Mahatma Gandhi, which had been first unveiled at the MLK Jr. National Historical Park on January 24, 1998.

The park, run by the National Park Service, had been closed because of the federal government shutdown that began December 22, 2018. With the efforts of Delta Airlines, the park was opened on January 19 for the MLK Jr. national holiday weekend. Thus admirers could visit the MLK Jr. birth home, the church, the visitor center, and the Gandhi statue. 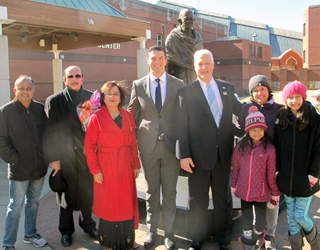 GF-USA’s midday event remembering Gandhi and Dr. King in front of the Gandhi statue was graced by the presence of Consul L. T. Ngaihte (Political and Consular Services), Atlanta City Councilman Amir R. Farokhi (district 2), representatives of Atlanta’s mainstream community, Asian Americans, African Americans, and the media. After a welcome by Antony Thaliath, GF-USA executive director, Hon. Ngaihte and other dignitaries garlanded the statue. Mrs. Raj Razdan and GF-USA gave a brief introduction of the Gandhi statue and MLK day. She said the ties between the Gandhi Foundation, the King Center, and the National Park Service have been exemplary, to spread the message of peace and nonviolence.

Consul Ngaihte spoke about Gandhi and King being more or less of one mind in that each spearheaded a revolution on the basis of nonviolence. Dr. King revolutionized the atmosphere all over the world. Quoting Gandhi’s famous “Be the change…,” Consul Ngaihte exhorted us to set an example, to make the world beautiful.

Atlanta City Councilman Amir Farokhi said, “Every celebration of Dr. King’s life and legacy is made more complete with recognition of Mahatma Gandhi’s influence, life, and legacy. The two are linked in philosophy, commitment, and scale of impact. The future for Atlanta and the United States is made better with Gandhi’s impact on Dr. King and Dr. King’s remarkable work toward Equality and Justice.”

John R. Naugle, a follower of Gandhi and King, read out a quote from Dr. King: “Gandhi was inevitable. If humanity is to progress, Gandhi is inescapable. He lived, thought, and acted, inspired by the vision of humanity evolving toward a world of peace and harmony. We may ignore Gandhi at our own risk.”

After the prayer meeting at the Gandhi statue, the gathering “Walked in Peace” to the King crypts, where the guests and others laid bouquets for the champions of civil rights, Dr. King and his wife Coretta Scott King.