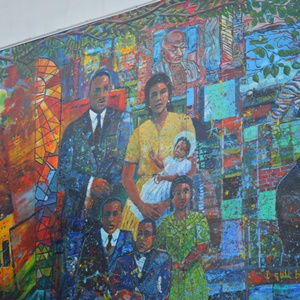 A mural on the wall behind the foyer at the Dr. Martin Luther King, Jr. National Historic Site has Gandhi’s face painted on it as part of Dr. King’s family portrait. (Photo: Navita Bhandari)

Mahatma Gandhi’s 145th Birth Anniversary was observed with significant pride and a small but potent program hosted by the Gandhi Foundation of USA (GFUSA) in Atlanta at the Dr. Martin Luther King, Jr. National Historic Site, on October 2, 2014. A baithak (small, low-rise stage) was set under the covered foyer before the main entrance to the exhibit halls. Dr. Father Paul Poovathingal, Founder, Chetana Sangeet Natya Academy, along with fellow musicians Professor Abdul Azeez on violin, Sanoj P.S. on mridangam and A.S. Sreejith on ghatam took enormous efforts to balance the sound, set-up the speakers, and have the presentation set. With refreshments by Swapna Indian Cuisine, the program began at 6pm.

Subash Razdan, Chairman of GFUSA welcomed everyone and spoke of the mural on the wall behind the foyer, which has Gandhiji’s face painted on it as part of Dr. King’s family portrait. He described the effort first to name a road after the Mahatama and that failing, to install a statue at the entrance of the King Center. GFUSA Executive Director Antony Thaliath requested the crowd to march the Peace Walk from the Center to the King Crypts and back. At the crypts, bouquets were placed by Guests of Honor Mr. Rudolph “Rudy” Hermond, Sr. VP of ATT, Dr. Iqbaljit S. Rai, President, Sant Nirankari Mission – US and Rev. Dr. Paul besides others, as marks of prayer and reflection on what Gandhiji’s birthdate means to the world.

Once back at the King Center, Dr. Paul and team mellifluously rendered Gandhiji’s anthem, “Raghupati Raghav Raja Ram.” Guests of honor garlanded the statue of the Mahatma. Dr. Rai spoke of the similarities in belief by the Gandhi followers and the mission of non-violence, social justice for all, cleanliness, and other. He spoke of the mission’s efforts at the United Nation to continue to influence the UN in actionable items to maintain global peace and harmony. Mr. Rudy Hermond of ATT shared his childhood memories of Gandhi and King stories and how he was influenced by their philosophy and employed the same at work and at home. ATT is a giant corporation and diversity is instilled in their work force selection processes. Rose McGinnis of the King Center spoke of the many years that King Center and GFUSA have worked together to keep the Gandhi-King philosophies prominently visible. Mary Hayden spoke of the deep friendship the National Parks Service has had with GFUSA, and despite short notices each event has been successfully executed and memories built. The Deputy Consul General of India in Atlanta, Hon. Ashok Kumar, spoke of the two great nations tied through Gandhi and King, besides a host of other common aspects. Guests of honor received plaques from GFUSA.

The birthday cake was cut after everyone sang Happy Birthday to Gandhiji. Prime Minister Modi has been referring to Gandhiji, clean inside and out, as Modi focuses on cleaning the filth on the streets and in politics to achieve a higher good.

The solemn evening was spent in memory of all Gandhiji did and stood for. He is celebrated each year to remind us that freedom is not cheap nor is it easy to be honestly free.