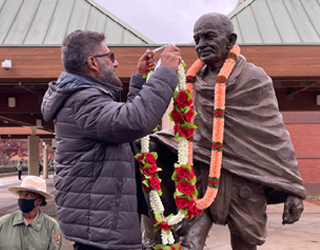 The Gandhi Foundation USA (GFUSA), in association with the Global Kashmiri Pandit Diaspora (GKPD), I Am Buddha Foundation and other community organizations, came together in Atlanta for the Walk for Peace for Kashmir on December 6 at the King National Historic Park in Atlanta.

Antony Thaliath, Executive Director, GFUSA, welcomed the gathering and invited Subash Razdan, Chairman, GFUSA to preside at the devotional service at the Gandhi Statue and the Walk for Peace for Kashmir.

Razdan reminisced about the installation and the unveiling of the Gandhi Statue by Ambassador Andrew Young in 1998 on a cold and blustery January morning with over a thousand people in attendance. He thanked the Indian Embassy, India Council for Cultural Relations, and various community organizations as well as the National Park Service for making the installation of the Gandhi Statue in Atlanta a reality. “This monument has served as a beacon and linkage with Dr. King Jr. for non-violence and peace for a million tourists who visit the King Park annually,” he said.

Razdan then introduced the guest of honor Vivek Agnihotri who emphasized the influence Gandhi had on Dr. King and was thus the virtual hand guiding the civil rights movement of the U.S.A. Talking about his award-winning movie The Kashmir Files, he added, “The movie condemns the violence and underscores the right to justice as the most fundamental pillar in a democracy, which the Kashmiri Pandits are yet to receive.”

Razdan then invited celebrated film and television actress Pallavi Joshi who expressed her thanks for the historic opportunity to be able to pay her homage to the two greatest leaders of peace, Mahatma Gandhi and Dr. King, at the most hallowed grounds for civil rights in the world. She recalled her cherished memories when she had played the role of Kasturba Gandhi, wife of Mahatma Gandhi, in Shyam Benegal’s 1995 movie, The Making of the Mahatma.

In her keynote remarks, India’s Consul General in Atlanta, Dr. Swati Kulkarni appreciated the good work done by the Indian-American community and the phenomenal support by the teams of King Center and the National Park Service. “Many world leaders like Dr. Martin Luther King and Nelson Mandela were influenced by Mahatma Gandhi’s techniques of non-violence. We have to rededicate ourselves to their teachings and philosophy,” Dr. Kulkarni said. She further added, “Today, on December 6, we celebrate, here at the Gandhi Statue, the Mahaparinirvan Diwas (the highest peace and happiness day to mark the death anniversary of Dr. B.R. Ambedkar) in the company of the distinguished Bollywood celebrities and with members of the Indian diaspora. Mahatma Gandhi and Dr. Ambedkar are India’s tall leaders. Both are extremely important national leaders and an extraordinary inspirational force for all of us.”

Mari Hayden, Supervisor of the National Park Service expressed her greetings, underscoring the importance of the special linking of the King Center and the Gandhi Foundation with the common message espoused by Mahatma Gandhi and Dr. King, exemplified by the presence of the Gandhi Statue in the King Park. 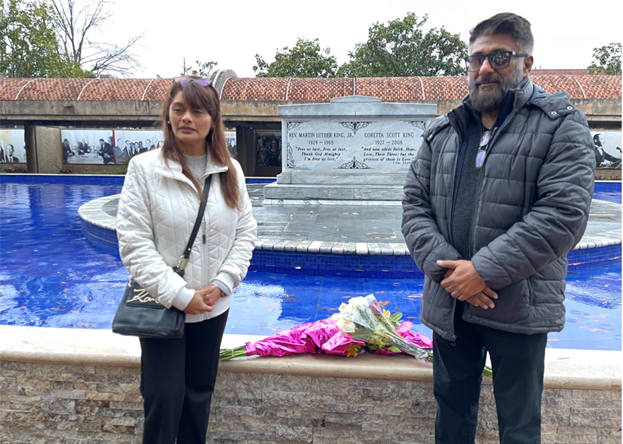 In his vote of thanks, Razdan remarked, “Atlanta is a city of peace and social justice because of Dr. King and his respect for Mahatma Gandhi’s message of Satyagraha. We are grateful for the partnerships of the National Park Service who facilitated the installation of the Gandhi Statue in 1998, the Embassy of India for arranging the donation of the Gandhi Statue in 1997, the King Center, and the invaluable role of Mrs. Coretta Scott King in promoting Gandhi’s awareness by establishing the Gandhi Room in the Freedom Hall of the King Center in 1987 and now presently the unflinching support of the Consul General of India, Dr. Kulkarni. A special thanks to GKPD, a global Kashmiri Pandit civil society for their commitment to bring awareness of the ethnic cleansing of Kashmiri Pandits from Kashmir over these past 30 years.”

Beginning with the rendering of Gandhi’s favorite bhajan, Raghupati Raghava Raja Ram, the Walk for Peace started from the Gandhi statue, through the famous Ebenezer Baptist Church and the Eternal Flame, and ended at the Kings’ Crypts where the guests paid their floral homage.

Earlier on Sunday, The Kashmir Files had a sold-out premiere in Atlanta followed by a VIP dinner. Surinder Dhar and Sridhar from Atlanta, supported by leaders and the Kashmiri community of Georgia, organized the film screenings in Atlanta as part of the month-long special screenings across the U.S. The film depicts the Kashmir genocide of January 19, 1990, when hundreds of thousands of Kashmiri Pandits were forced to leave their homes overnight with many killed mercilessly.

Featuring Mithun Chakraborty, Anupam Kher, Darshan Kumar, Pallavi Joshi, Chinmay Mandlekar among many others, the film is poised for worldwide release on January 26, 2022, with the support of GKPD leaders including Dr. Surinder Kaul and Sunil Hali.